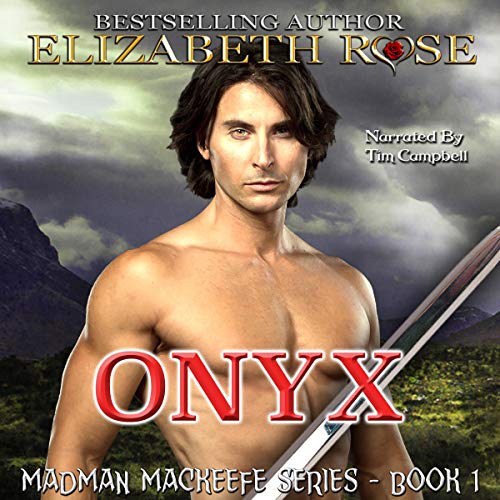 Feared as a demon because of his two different colored eyes, as well as by his outlandish actions, Highlander Onyx MacKeefe is known as a madman. While celebrating his birthday one cold night at a Lowland pub, he meets a bonnie Englishwoman who says she is searching for her father's murderer and thief. And when he recognizes the name of the person she seeks as his own mother, his birthday takes a bad turn.

Lady Loveday de Lacy, known as Lovelle, comes looking for not only a murderer from the past, but also something that's been stolen - her mother's Book of Hours. She is desperate to find it, as she needs the help of the mystical charms at the back of the book. But when she meets a rugged Highlander who takes her captive in order to secure his mother's life, she finds herself being reckless, and also attracted to the dangerous man.

But things only become more complicated as Lovelle and Onyx find themselves needing each other, but knowing they are enemies. And the more they try to fight off the attraction between them, the stronger it becomes. But neither of them see the harrowing future in store for them as Onyx is faced with demons of his past and there is also an outbreak of the plague that threatens their very lives.

Can a proper Englishwoman and a Scottish madman find the strength and will to work together before impending doom overtakes them?

Would you listen to Onyx again? Why?

I will listen to this story again, as it relates to the stories of his four sisters, so I am certain after I go to each of those I will want to revisit Onyx's story. It went by so quickly- really interesting plot.

Aiden and Ian, Onyx's two best friends made me laugh. I envisioned them as his hot sidekicks. I also thought the blind hag added intrigue, and Onyx's natural father was a man who had regrets, but was a complicated person.

Have you listened to any of Tim Campbell’s other performances before? How does this one compare?

I have listened to several of Tim Campbell's performances, by several different authors. I have yet to be disappointed! His interpretation of each character in this story, and their voices, along with differing accents was wonderful. I truly enjoyed myself listening to the tale.

I found myself laughing throughout the reading, especially at the antics of Onyx's two friends. I felt for Lady Love as she worried for her son, and was saddened with Fenella's fate.

I enjoyed this story and can highly recommend it. The plot was interesting and had moments of varying emotional ups and downs, with humor and romance. All this and told by a fantastic narrator.

What did you love best about Onyx?

I loved listening to Onyx's journey of discovery of his true self. From feeling unloved to discovering he not only could find someone to love him, but he had a father that loved him and the clan that had raised him loved him deeply and would always be there for him.

Which character – as performed by Tim Campbell – was your favorite?

I loved them all. Tim Cambell puts much into all the character's Making each their own unique being bringing Elizabeth Rose's vision from paper to life.

I often wanted to reach in the device and shake sense into Onyx when he was being so hardheaded.

I can't wait to find out about the rest of the MadMan MacKeefes!

Onyx was thought to be dead when he was born. His mother tried to steal a dagger with an onyx embedded in it from a witch before he was conceived. He was taken to Scotland by a women who was a thief. She discovered he was alive and he grew up thinking she was his mother. When everyone saw that he had two different colored eyes, they called him the devil.
This is only a thread in the tapestry when you listen to this one. It has many twist and turns---then the real story unfolds!! Only a great storyteller can put color into these threads. The Narriator brought it to life with every thread. This masterpiece will be so complete in your mind when it ends, you will want to hang it on your wall. We all have choices in life. We curse ourselves by our thoughts and actions. Make a right choice and choose this book, you won't be sorry.

when you are someone then you think you are

onyx is a strong character , he has two different color eyes so he is fear by most , so when he has a chance of love, by someone who, loves him for his actions not the way he looks, can he trust her not to chance her mind when the truth comes out. you will love this story and its a story that you can relate to , most of us have been judge by the way we look, not our actions, so we can really understand and feel onyx pain , great story

what a great story!

This story was enthralling from the beginning, and the characters were funny, engaging and friends that I will miss!

Tim Campbell, what a fabulous narrator he is. He is one of only 2 male narrators that can do a believable assortment of female voices while also being able to have a sultry, sexy, deep voice for the male heroes of a book, in this case, Onyx. The emotions that Tim can get across from the characters is wonderful making him my second favourite male narrator. Even just his normal reading voice is smooth and is a delight to listen to. I believe this man could read the phone book and make it sound exciting. Thankfully he doesn't have to do that and having Onyx to narrate spotlights how talented he is.

As for the story, I enjoyed the intrigue and the twists and turns. Onyx and Lovelle's lives have been intertwined for much longer than they could have dreamed. When certain things come to the fore I couldn't help but feel the same emotions as the characters themselves. I was absolutely gobsmacked when a truth was revealed about Onyx's father. Talk about not seeing something coming!!

I really only think there was one thing that made me cringe in the story and that was when as a newborn baby, Onyx was supposed to be wide-eyed and had a big smile on his face when he was first introduced to the story. Not the actions of any newborn baby that I have come into contact with. It's just a niggling thing, but it stops the story being perfect. Other than that I definitely have no criticisms and am very happy to recommend the book. I definitely plan to read more of the series.

Onyx's life started out horrible he was presumed dead and it only got worse from there. He was plagued with have two different color eyes that gave him a demonic appearances. He was also plagued with appearing to be dead. Things change for him once he meets Lady Loveday. He finds out things that his most thee has kept from him his entire life. His life is full of chaos until he meets a mysterious older lady who puts everything into focus. No spoilers but this book is well written and worth every penny.

Loved it. Can't wait to read what happens to Aiden and Ian.

Elizabeth Rose does a beautiful job with this exciting, fast paced romance novel. If you enjoy historical romance novels with a touch of magic, then you'll love reading Onyx. It's beautifully written with a unique, intriguing plot and well developed characters you can't help but become attached to. Tim Campbell gives a 5 star performance with his amazing vocal talent which brings the characters to life in the audio version.

First in the next series after daughters of the dagger.
Well done! Lots of room for more stories and such a good one to build off of. Medieval romance, yes!
Oh, and I love Tim Campbell as a narrator!