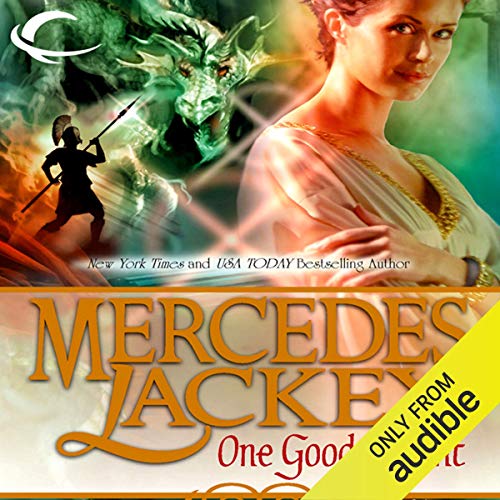 Traditionally, marauding dragons are soothed only by a virgin sacrifice. And so practical-minded Princess Andromeda - with the encouragement of her mother's court - reluctantly volunteers to do her duty, asking only for a sword to defend herself. Well, her offer is accepted, but the weapon isn't forthcoming, and so Andromeda faces the dragon alone.

Until a Champion arrives to save her - sort of. Sir George doesn't quite defeat the dragon, but as Andromeda finishes rescuing herself she discovers that beneath the Good Knight's well-meaning though inexperienced heroics lies a further tale… Still, Andromeda can't leave her seacoast country in further jeopardy from the dragon's return, and so she and…er… George join to search for the dragon's lair. But even - especially - in the Five Hundred Kingdoms, bucking with Tradition isn't easy. It takes the strongest of wills, more than a hint of stubbornness, quick thinking and a refusal to give up, no matter what happens along the way.

Somehow, though, none of this was taught in princess school…

Not exactly what I expected

I expect a good story from Mercedes and I was not disappointed. You come to expect certain things from fairy-tales, What I did not expect was how I burst out laughing when the unicorns came. The reaction to them and someone being "outed" by them was something I hadn't considered. The performance and story still makes me smile a week later. I simply must have the next book in the series.

Addictive Series comparable to Once Upon a Time

If you've seen the new TV show Once Upon a Time with all the most well know old fables and stories, and you liked that you will love how Gabra Zackman brings this series to life. Mercedes writes a good story but most of her books are read by terrible narrators (I found that out trying to listen to a couple others and then reading all the reviews). Not to worry in this series, because you have Gabra Zackman. After this series I fell in love with Gabra's reading style and went so far as to follow her on Facebook, as well as look up other stories she has read. Most of my favorite audible books now are read by Gabra. Luckily she is a prolific reader and audible has dozens of pages of books read by her. I just feel bad that Mercedes Lackey choose not to user her for any of her other series. I wish Audible would go back through some of Mercedes books with bad reviews (MOST ARE ALL attributed to narrator boredom.. read the comments) and have her redo the books. Other great narrators (IMO) are Martha Harmon Pardee, Barbra Rosenblat (she made me read 18 books of the Amelia Peabody series.. the most addicted I've ever been to audible!), Becca Battoe (I have friends who disliked her in 50 shades but I ended up really seeing the world through her eyes easily, unfortunately the other books she narrates are mostly for kids, ugh!).

GREAT SERIES, a must listen for anyone (mostly women) who love comedy, mystery, magic, fantasy, love, and tales that remind of you of Cinderella, lost princesses and knights in shining armor. NOT a kids book.

I am so happy to find this series! Virgin sacrifice, dragons, I really did not see the twists coming. Just a cute story. I was happy that this book did not have the detailed romantic encounters of the first book.

Would you listen to One Good Knight again? Why?

No as I own way too many audio books that I have yet to listen.

Our Dragons heros and the Fox. Lots of pure charm

Which character – as performed by Gabra Zackman – was your favorite?

Ms Zackman has such a full range. The Dragons and fox stand out.

A way different spin on an old fairytale classic. I thought there would be more funny dialogue based on other reviews. Not in this one. Lots of tender scenes. The dragons using their head and bodies so sweet.

If you are looking for tenderness, then this is for you. This is a cross between romance and
fairytale. Must love the old classic fairytales.

This is one of the books in the series I definitely wouldn't mind listening to or reading again.

i love how the story is written and how the reader sounds. She brings the book to life.

Most excellent as usual

Mercedes Lackey outcomes herself with each installment of this magical series. These volumes are my favorite go-to when I want a fun fabulous romp through fairy retold. And I could listen to Gabra Zachman's enchanting voice forever.

Not the best of the series

Well read and decent for a single read through, but the ugly duckling of the series for a certainty. And for anyone who buys books that you woild like to read time and time again, this wont get much milage.

As a romance it fell a bit flat as the amount of time spent building the relationship between the two who love on a purely mental and emotional level since they lack compatible physical forms never developed enough to justify the apparent intensity of the affection. And the other pair never even get a moment of consideration for their apparently equally as intense passion. All in all it felt rushed and full of time killing rather then maturation, which is never a plesant combination.

Andromeda spends far more time focusing on all the things that make her uncomfortable ratyer then ever seeming to come into her own as a character or someone who has grown through the course of the narrative.

In One Good Knight, Andromeda (Andi) is very book smart and she starts to notice some magical irregularities in her research for the Queen. During this time, the Queen had her consort conjure a dragon to wreck havoc on the villages. Andi is tasked to find out how to “rid” the kingdom of the dragon and discovers meaningful sacrifice would do so. A lottery is set up for virginal women, and each week a new name is drawn. After a while, the reader discovers prior to the cast, that this lottery is not by chance, but whenever a family displeases the Queen or speaks out against the Queen, their daughter is “selected” in the lottery and sent to die. During one such lottery, Princess Andi’s name is drawn and she is sent to be sacrificed, and so the adventure begins.

I really enjoyed the twists and turns this particular story had. As a reader, it is often times easy to get bored when books do as you expect. One Good Knight keeps readers entranced. Without giving away spoilers, the ending has been one of the best I have enjoyed. Much like in The Fairy Godmother, the Tradition had a mind of it’s own, only in One Good Knight I really enjoyed the way the Tradition worked for the characters. I feel Andi was well written. She is portrayed as a confused, homely, child not to be taken seriously for most of time leading up to her being sacrificed. Queen Cassiopia is one to be despised. She is heartless and offers up her daughter happily to be killed.

The reason the actual rating is 4.5 stars is mainly because it was soooo slow to start out. Once the excitement of Princess Andi being sacrificed to the dragon occurs, things really start to speed up.

I really can’t say there is a particular character I didn’t like, aside from the villains of course, but I even enjoyed them. I thought each character in the book gave the book it’s personality it took on. Oh but the twists!!! It would be too many spoilers to explain the twists, and I want any potential reader to be as shocked as I was when I first came to the twists.

I am really glad I started this series, and I look forward to more Virgin chasing unicorns, fairy godmothers, and all of the other Traditional tales yet to be discovered.

This is the classic tale of the knight saving the princess from a dragon, but it quickly develops a number of interesting twists from there. You might say that love always finds a way, just not in the way you expect.

Well, that was fun!

I have been reading a lot of fairy tales to my 4-year-old son lately, but I really loved this one. Although (like all fairy tales) the end was pretty obvious from the beginning, the twisting way to that end and especially the idea about manipulating Tradition was not only well thought out, but also well written. Add to that a superb reader, and you got me hooked!