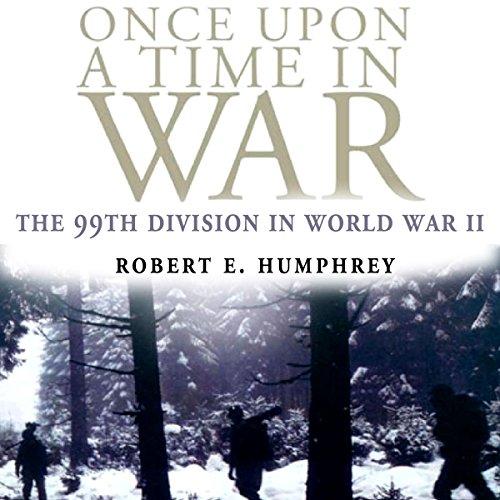 Once Upon a Time in War

Once Upon a Time in War

For the soldier on the front lines of World War II, a lifetime of terror and suffering could be crammed into a few horrific hours of combat. This was especially true for members of the 99th Infantry Division who repelled the Germans in the Battle of the Bulge and engaged in some of the most dramatic, hard-fought actions of the war.

Once Upon a Time in War presents a stirring view of combat from the perspective of the common soldier. Author Robert E. Humphrey personally retraced the path of the 99th through Belgium and Germany and conducted extensive interviews with more than 300 surviving veterans.

When Humphrey discovered that many 99ers had gone to their graves without telling their stories, he set about to honor their service and coax recollections from survivors. The memories recounted here, many of them painful and long repressed, are remarkable for their clarity. These narratives, seamlessly woven to create a collective biography, offer a gritty reenactment of World War II from the enlisted man's point of view.

Although focused on a single division, Once Upon a Time in War captures the experiences of all American GIs who fought in Europe. For listeners captivated by Band of Brothers, this book offers an often tragic, sometimes heartwarming, but always compelling listen.

The book is published by University of Oklahoma Press.

"An absorbing social history of the common soldiers of the Checkerboard Division. Genuine and credible-a captivating story told mainly in the words of the GIs themselves." (Peter R. Mansoor, author of The GI Offensive in Europe: The Triumph of American Infantry Divisions, 1941-1945)
"A rich portrait of the American citizen soldier in war." ( Journal of Military History)

His cadence was up and down constantly; not smooth. Consistently mispronounced military words, such as "corps", pronouncing it "corpse", like a dead body.

What made the experience of listening to Once Upon a Time in War the most enjoyable?

It was hard to enjoy this book because of the narrator. I'm reluctant to criticize someone who apparently does this for a living, but Mr. Graham's delivery was like a phrase-by-phrase staccato in many places and he seemed to ignore breaks between sentences. I felt like I was was being rushed through the book to the point where it was hard to follow what went on.

The soldiers who fought in this war and in this battle were brave men, and their courage is demonstrated in the narrative.