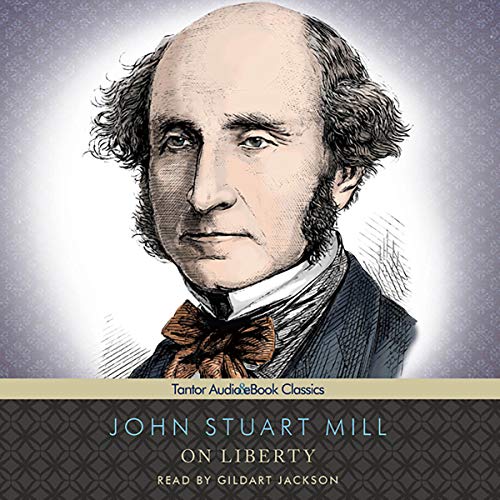 First published in 1859, John Stuart Mill's On Liberty is an exhaustive exploration of social and civic liberty, its limits, and its consequences. Mill's work is a classic of political liberalism that contains a rational justification of the freedom of the individual in opposition to the claims of the state. Drawing upon the empiricism of John Locke, George Berkeley, and David Hume, and the utilitarianism of Jeremy Bentham, On Liberty defends the representative democracy as the culmination of society's progression from lower to higher stages, even as it recognizes one of the unique dangers of this type of government - namely, the "tyranny of the majority".

Central to Mill's ideology is the harm principle - the idea that individual liberties should only be curtailed when they harm or interfere with the ability of others to exercise their own liberties. Unlike other liberal theorists, Mill did not rely upon theories of abstract rights to support his ideology, but rather grounded his philosophy in ideas of utility.

As relevant to modern audiences as it was to Mill's Victorian readership, On Liberty is an enduring classic of political thought.

should be read by liberals and conservatives

should be read by liberals and conservatives to encourage civil discourse. it discusses the power of listening to those that do not agree with.

A book that should be part of every curriculum in every corner of every state.

A bit primitive, but nonetheless thought-provoking

Very dull at points, and in 3-5 places unfortunately racist, mostly out of a cognitive dissonance over Britain's imperial colonies and their antithesis to liberty (though ironically the main points of the book argue for the free expression and debate of ideas specifically to correct such errors). From time to time one can discover interesting food for thought where parallels can be drawn to modern cases. However, the arguments for liberty are very first-order and naive, and anyone familiar with the foundational philosophy of the American constitution will find the arguments, while mostly true, nonetheless fairly simplistic (and extremely long-winded despite that). The first 1/3 or so of the Federalist papers, published some 75 years earlier, provide a much more pragmatic argumentation for liberty, not merely in the abstract philosophical sense, but in the sense of a resilient society prepared for persons of ambition and deception. I would recommend this book for adolescents and teenagers as an introduction to libertarian thought, except it's far too slow and boring for them.

This book provides the clearest outline for the dangers and remedies to the greatest threat to our liberty since the jack boot.

An absolute classic and I'm glad I had the opportunity to listen to it as an audiobook!

He’s riding on the need to protect contrary opinion and others importance to freedom in true Dan Smith humanity has never been more needed than now at a time of cancel culture.

Should be required reading for High school students. Chapter two is a fantastic review of the value and importance of free speech.

Should be required reading for everyone.

All I can see is that if you've read this and understand it, you will discover that the world is in pretty dark place right now, where liberty is under huge threats. You certainly can't be someone who'd think remaining in the EU would be good idea. Sobering indeed.

The best treatise on Free Speech ever written!

Re-read”On Liberty”, for the 3rdtime. It is the greatest treatise on Free Speech ever written, published in 1859, but prescient for the politics of today.

If you've never read it, it delves into the suppression of speech by forces such as government and the tyranny of the majority (public opinion), to include the stifling of speech with the use of labels. Heresy & blasphemy were the dogmatic supression terms of the past, is ”X-phobia” the dogmatic term(s) of today? 🤔

A great yet brief assessment on the human concept of True Freedom and Liberty. An instant classic!

Old Work, New #1 For My Recommendations

It is difficult to choose between the many reasons why this essay is exceptional beyond compare.

In the continuing conflicts between liberty and authority, its ideas and influences can be seen on the world stage to this day. John Stuart Mill displays a level of intelligence and educational competence that is now, 160 years later, still almost impossible to find. Rationally examining the principles of liberty, he builds a framework for directing societal rules, as well as for classifying the adverse effects of ignorantly chosen rules.

The predictions and notions are outright prophetic! Naming Newtonian Physics as an extreme but applicable object for criticism, to allow a new truth to be found. Describing the properties and effects of socialism. Describing the exact ways that would plague both the Soviet Union and China much later, addressing the downsides of their specific societies and how they cause these developments.

He derives and proposes highly progressive changes that have only seen broader implementation in recent times, such as toleration for atheists and Mormons, or giving wives equal rights to combat despotic husbands. He even encodes the legality of homosexuality into the work, in a way an ignorant reader of his time would not detect, further demonstrating how his intellect was able to bridge what otherwise takes humanity centuries to establish.

And of course, last but not least, he explains the ways by which freedom of opinion, argument, and personal choice can serve as the cornerstones of a productive and cooperative society.

As I sit here, pondering over the downsides of current education – for which Mill offered both an explanation and a solution – I can't help but wonder what the world would be like had he, or someone as well versed in liberal principles, ever been allowed to define the legal framework of a large country.

I very highly recommend "On Liberty" as a crucial philosophical, historical, and political education, and as the best piece of writing I have ever come across.