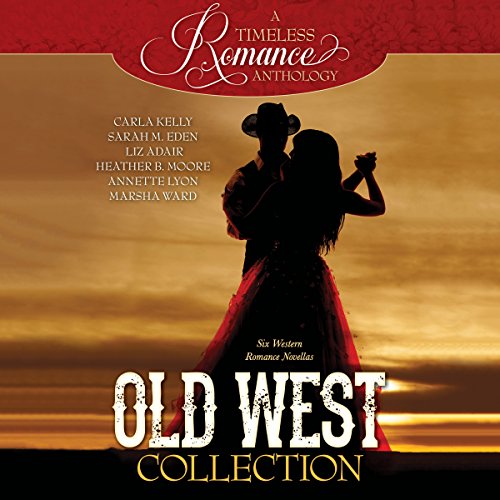 Six award-winning authors have contributed new stories to A Timeless Romance Anthology: Old West Collection. Listeners will love this collection of six historical western novellas, all with one thing in common: Romance.

In "Break a Leg", a charming story by two-time Rita Award winner Carla Kelly, hospital steward Colm Callahan is ready to move away from army life at Fort Laramie. His only regret is leaving behind exotic Ozzie Washington, easily the prettiest woman on the post. As a maid to the lieutenant colonel's wife, Ozzie is no wilting flower when it comes to hard work. When the post surgeon leaves for an extended week, Colm must handle several medical emergencies on his own.

"The Soldier's Heart", an enchanting novella by Sarah M. Eden, follows Gregory Reeves who has fallen in love with a woman he's never met. Her brother's dying wish is that Gregory checks on his family, and after the war, Gregory is only too happy to meet the woman he's been dreaming about. Helene mistakes him for a hired hand and sets him to work immediately. As time passes, Gregory finds it more and more difficult to reveal his true connection to her family, fearing that a woman who loathes liars will turn her disapproval on him.

"Hidden Spring" is an enthralling novella by Liz Adair, in which Susannah Brown is just getting her life back together after becoming a widow. She still misses Wesley with a fierce longing, but when she meets his half-brother, Douglas, she learns her heart is not completely dormant.

"The Silver Mine Bachelor", by Heather B. Moore, is a sweet romance between an unlikely pair. Lydia Stone has a checklist for men who qualify as the eligible bachelors in the mining town of Leadville, Colorado. Her new boss, Mr. Erik Dawson, is about to be struck off the list when she sees him coming out of the town brothel. Lydia doesn't know that Erik Dawson's sister has been living the brothel lifestyle for years, and he's set on redeeming her soul.

In Annette Lyon's delightful story, "The Sweetest Taste", Della Stafford hates being a farm girl in the tiny town of Shelley, Idaho. She'll do anything to live in a big city and experience real city life. Her only regret is that she'd have to leave Joseph behind, the young man who makes her heart flutter.

In the captivating novella, "Faith and the Foreman" by Marsha Ward, Faith Bannister is forced to travel west to earn a living as a school mistress in Arizona Territory. Faith soon learns that living the frontier lifestyle of a single woman has many harsh challenges. But when she meets Slim McHenry, she discovers that life doesn't have to be so lonely.

Great stories but the reader was pretty terrrible. Sounded better at higher speeds but ultimately wished someone else was reading.

BREAK A LEG, by Carla Kelly. As expected since it's by Carla Kelly, it's not the usual couple or situation. While it isn't one of her best, it is still the best story of the collection. Having it first made it a little harder for the rest to measure up. And I found myself wishing that Kelly had written the others. Because she would have done a better job of it. 4/5

THE SOLDIER'S HEART, by Sarah M. Eden. This is a typical mistaken identity story. It has some improbably mishaps, of course, and the ending felt contrived. It could have used a little more development. Eden is capable of better writing. 3/5

HIDDEN SPRING, by Liz Adair. This is a rather sweet second love story. It ran as expected, no surprises in it. Douglas wasn't very well developed and was presented in a contradictory manner. I couldn't quite picture him because he never felt real. I think it would be a good story to rewrite and lengthen. Or just give the premise to Carla Kelly and let HER write it. She could keep it from the typical storyline. 4/5

THE SILVER MINE BACHELOR, by Heather B. Moore. This was so disgustingly preachy I had a hard time finishing it. And my eyes rolled so hard I could see my brain. As soon as the girl and her boss are introduced, you can predict EXACTLY what will happen. Every single step. The prejudice is lauded and the holier than thou attitude of the girl is never addressed. Moore is capable of much better work than this. This was terrible. 1/5

THE SWEETEST TASTE, by Annette Lyon. Once again, extremely predictable. Della hates life in her little Idaho town and the cowboy Joseph is in love with her and wants her to stay and marry him. And she goes to LA, has a horrible time in the two weeks she's there and decides she really DOES want to be a farm girl and marry Joseph. Groan. Of course then you are left taking bets on how long it will take before she remembers how much she hates farm life and dreams of the big city again. Once again, I wanted to see Carla Kelly rewrite it. She gives her female leads a strength that few others of these writers in these Timeless Romance collections are able to do. 2/5

FAITH AND THE FOREMAN by Marsha Ward. Faith has to travel west to be a school teacher in Arizona Territory. She meets Slim McHenry, foreman for a local rancher. Throw in an evil, cattle rustling, Bond level bad guy who is trying to poison his step dad with jimson weed in his whiskey and other silliness and you have this predictable story. Too many characters for this length of story. And they are in ARIZONA territory complaining about the heat and saying it must be 80 degrees in the shade?? That's cool weather in Arizona! And once again, I wish Carla Kelly had written it. Sigh. 2/5

As for the narrator, Siiri Scott, she's all right. Not the greatest narrator but also not the worst. She does weird pauses in the speech of the men that are a bit distracting. A better narrator might have made the stories sound better but that would be like putting cream cheese icing on a cake missing the sugar.

So yeah. The collection is meh.

I enjoyed these fun western stories! They were full of heart and happiness! My favorite kind!

A great group of western stories each unique and interesting to listen to. The characters were interesting and real.