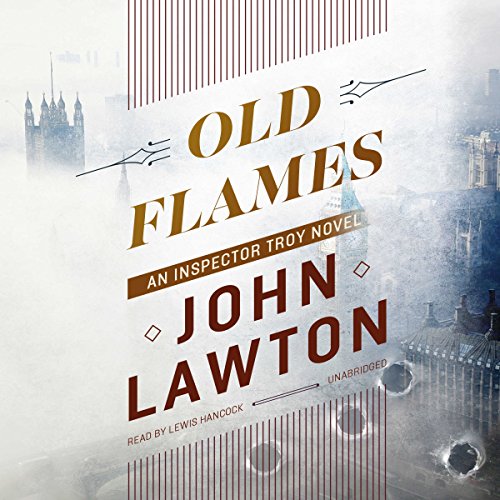 In April 1956, at the height of the Cold War, Khrushchev and Bulganin, leaders of the Soviet Union, are in Britain on an official visit. Chief Inspector Troy of Scotland Yard is assigned to be Khrushchev's bodyguard and to spy on him. Soon after, a Royal Navy diver is found dead and mutilated beyond recognition in Portsmouth Harbor. Troy embarks on an investigation that takes him to the rotten heart of MI6, to the distant days of his childhood, and into the dangerous arms of an old flame.

Brilliantly evoking the intrigue of the Cold War and 1950s London, Old Flames is a thrilling adventure of intrigue and suspense.

great, if a bit long

Maybe it is lust me, but I find that Lawton does a great job of making the reader understand the time (and place period. Lewis Hancock invests the characters with, well character. Hancock has done a great job with the series which is demonstrated by how disappointed I was with Sara Coward's reading of part 1 in "A Lily of the Field." For me, narrators are an underrated part of the success or failure of a book reading. Hancock is reason enough to try the series.
Lawton's characters are interesting, although if Larissa Tosca were to be excised, I would not mind a bit. Sometimes the plot seems to get sidetracked, but I found these sidetracks at least as fascinating as the plot. The Britain of the fifties in England is not the fifties of "Father Knows Best" nor "leave It to Beaver." Lawton does not show a land of milk and honey. British films at this time were black and white, not color in cinemascope, so while Troy drives his Bentley, little kids in the country can't identify the vehicle. I see more than hints of class consciousness, and a subtle despair that England and its empire may not have lost the war, but they are losing the peace.