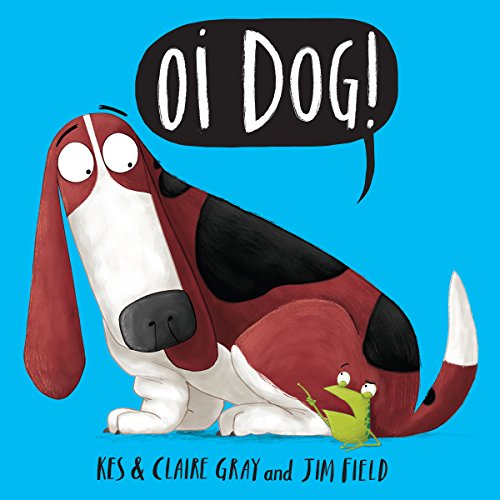 The hilarious sequel to the best-selling Oi Frog! It will have children rolling around with laughter. Short-listed for the Sainsbury's Children's Book Award 2016.

Frog's had enough. He's the changing the status quo! Cat insists that there are rules - only mules sit on stools, no one but hares should sit on chairs and, however irritating, dogs MUST sit on frogs.

'Well, I'm changing the rules,' said the frog. 'From now on, dogs sit on logs, not frogs!' And everyone else is going to have to sit somewhere else, too.

Will Cat want to sit on gnats instead of cushy mats? Will spiders like sitting on gliders? Will whales be happy to sit on nails? And, most importantly, where is FROG going to sit?

"It's not often I laugh out loud when reading picture books. This was one of those rare occasions.... Great stuff." ( Ann Giles Book Witch)
"A gem of a book which gets funnier and funnier as you read through the outrageous suggestions." ( Parents In Touch)
"I think perhaps the Gray/Field team have, between them, managed to out-dog Oi Frog with Oi Dog! It's absolutely un-missable." ( Red Reading Hub)
"I simply implore you to buy it so you can enjoy it for yourself! I simply want to say that this was my most anticipated book of the year and it hasn't disappointed. It has exceeded all expectations.... And I think it is my 'Book of the Year'!" ( Book Bairn)
"This is a gigglingly delightful book, a perfect match of words and pictures to entertain again and again." ( Daily Mail)
"This is a side-splitting follow up to the hugely popular Oi Frog! which blends the winning formula of bright eye-catching illustrations with witty rhyming text." ( Book Trust)
"A sequel to the phenomenally successful Oi Frog, this vibrantly illustrated and brilliantly funny rhyming book will have kids laughing out loud." ( Huffington Post)
"A wonderful and sophisticated rhyming game of a book." ( Love My Books)
"Hilariously crafted and engagingly illustrated by its creators, this stunning picture book ensures a simple and highly enjoyable read." ( Teach Early Years)
"Guaranteed to become the bedtime read of choice for adult readers as well as the children listening!" ( The School Run)
"If there was an award for the funniest picture book of the year, it would go to Oi Dog...it's got the 'again' factor in spades." ( Irish Independent)
"Bold, bright and creative, it's funny too!" ( Hexham Courant)
"Such fun!" ( Newbury Weekly News)