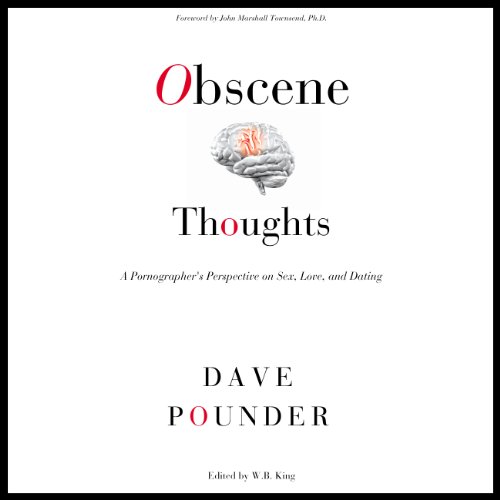 Obscene Thoughts: A Pornographer's Perspective on Sex, Love and Dating examines progressive, intellectual and academic constructs regarding mate selection, sexual behavior and the reasons why people cheat. Obscene Thoughts investigates and deconstructs core socioeconomic and biological values and the sexual behaviors of men and women, in a fresh, distinct manner.

This book is so bad I returned it after giving an hour of my life.
The narrator has a voice that should be reading the news, not a book.
The author has a large vocabulary with which he re-hashes every sexist prejudice you can think of: for example, one reason a man has no interest in sex is because he may have a small deformed penis.
Women want babies as much as men want sex according to this moron.
Utter rubbish. Read Jesse Bering's Perv instead.

First of all, this is machine text-to-speech, not narrated by the author. The author did an interview on the Life in Overdrive podcast and this is nothing like it. It's good machine speech, not like Siri, so if the Audible New York Times narration is OK, this is similar. Half the words in the book have "scare quotes" around them even when it's not necessary, and Every Single One is read out as "quote unquote _word_" instead of just as a change of intonation. Glad I got this "free" from Kindle Unlimited, otherwise it would be ideal for Audible's return policy. The content is awful, but I couldn't stop listening to this trainwreck of a book. It's a facepalm every 10 minutes. "The majority of women under 30 can't have an orgasm", "most people meet at bars and clubs", outright eugenics, comparing men watching porn to women in the workplace and getting even that bad analogy's logic wrong, sociopathically naive explanations of the dating marketplace based on economics and big data but painfully ignorant of the emotions involved (might be OK for a statistical analysis matchmaking algorithm, but useless for individuals). The evolutionary psychology is perhaps the most misleading part, as this is a relatively recent book, but using 20 year old pseudoscience that is little other than culturally myopic "just so" stories. A good 20% of the content is why men should cheat, women should just deal with it, but they can't, so men should just lie. Seriously. Read Esther Perel's "Mating in Captivity" or "State of Affairs" if you want good information on infidelity and how to deal with it in a long term relationship. A biological imperative to stray does not mean it's as unavoidable as eating or sleeping. The author's libertarian and data-driven economic analysis bias come out in his insistence that personal freedom means doing whatever you individually want instead of what accounts for the feelings of people you're emotionally connected to. Try Mary Roach's "Bonk" for a better comprehensive take on sex and relationships. Christopher Ryan's "Sex at Dawn" for a more accurate view of human evolution (hint: we didn't evolve mate choice in bars and clubs), Jesse Bering's "Perv: The Sexual Deviant in All of Us" for a lighter exploration of human sexual nature, and Richard Prum's "The Evolution of Beauty" for explanations of why there are preferences and appearances from sexual selection that have no adaptive value in terms of "good genes" or fertility levels (and also why enough sperm to actually get someone pregnant isn't that cheap, and why men can't in practice have way more kids than women can no matter how widely they stray, Genghis Kahn being a unique case). If you want a book on one of the most subtle topics, intimate human relationships, that is a combination of an Microeconomics 101 course, a crass rehash of old status-quo justifying evo-psych at its worst, and a dating manual worse than "The Game" (Pickup Artists) dating manual, then this might be the one for you.

Fascinating book, listen to it and read it!

Dave Pounder, the author, narrates the book himself and does so beautifully almost as if I were sitting down listening to him talk about various aspects of human dating behavior. The author is not only a great storyteller but also a good speaker with a pleasant voice and tone that captivates you.Pounder did a much better job than the first narrator whose delivery I found exaggerated and annoying.
Pounder gives us insight into the psychology of dating using thoughtful analogies. While Pounder's conclusions may not be aligned with what we want to believe, I have observed real life evidence to support Pounder's assertions.
The content is thoroughly engaging and provocative. Each chapter left me thinking, sometimes laughing and on occasion disagreeing with some of the author's comments.

This is dinner topic fun! Read it and discuss it with friends!