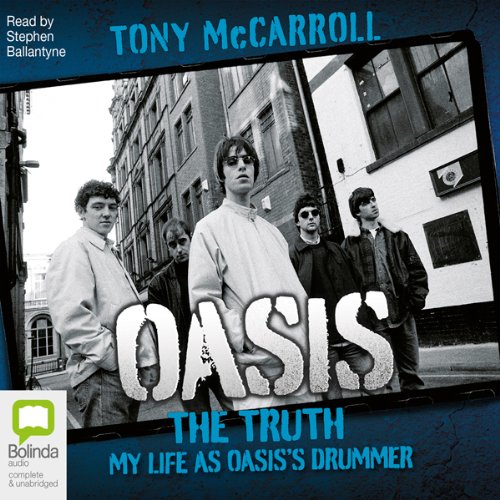 In 1991, five wannabe Mancunian musicians came together and cracked the spark that ignited the explosion which became Oasis. The band went from obscurity to a global phenomenon in the space of a year, achieving world-wide recognition and selling over 70 million records. What started out as five young lads with a common dream of becoming rock stars eventually disintegrated into in-fighting, clashes of egos, and financial disputes. In 1995, following the release of Definitely Maybe - the fastest-selling debut of all time - things came to a head and drummer Tony McCarroll left the band.

In this candid and hilarious book, Tony tells one of the most in-depth rock 'n' roll stories of modern times. He reveals the truth about the early years before the band was even formed; he tells of the drinking and drug consumption. Plus, he talks of his much-publicized rift with Noel Gallagher. Tony's recollections include stories involving David Beckham, Prince, Eric Cantona and John McEnroe.

Insider's view of a rollicking band

Insider's account of the rise and fall of Oasis. Lots of details of the bands early days with a lot of emphasis on the genius and hubris of Noel Gallagher. The narrative is compromised by the authors falling out with Noël so don't expect a balanced portrait of the Gallaghers. Still, it was an enjoyable read with lots of interesting tidbits.

The music business is a dirty one...

Not sure how relevant this is to anyone other than Oasis fans? Unless you're interested in discovering how often musicians, even those and successful bands, get screwed by the music business. And sometimes, by their own bands. When it comes to any acrimonious parting, there are always two sides to every story. But this is Tony McCarroll's memoir after all, so he gets to tell his side of things... And he paints a fairly rosey picture of himself. But again, not surprising considering the subject of the material. All of this said, however, no one would characterize either of the Gallagher brothers as "good guys." And Oasis ultimately imploded mostly due to Noel, even though he got his way more often than not throughout the band's history. So, maybe Tony's take on Noel as the supreme villain of Oasis isn't too far off base. And in addition to all the infighting, Tony also profers a lot of great history on the band's early formation. And a snapshot of his time with the group as they rode the Definably Maybe rocket to superstardom. And sure, it's tough to peak at 23. But how many can claim to have reached such heights at any age?