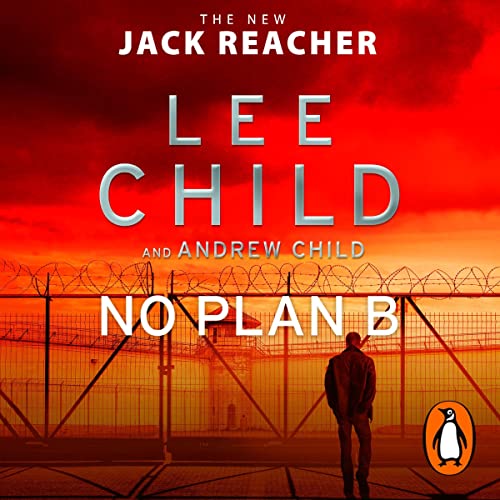 Gerrardsville, Colorado. One tragic event. Two witnesses. Two conflicting accounts. One witness sees a woman throw herself in front of a bus—clearly suicide. The other witness is Jack Reacher. And he sees what really happened—a man in grey hoodie and jeans, swift and silent as a shadow, pushed the victim to her death, before grabbing her bag and sauntering away.

Reacher follows the killer on foot, not knowing that this was no random act of violence. It is part of something much bigger...a sinister, secret conspiracy, with powerful people on the take, enmeshed in an elaborate plot that leaves no room for error. If any step is compromised, the threat will have to be quickly and permanently removed.

But when the threat is Reacher, there is no plan B....

The last time I read a Reacher book written by a collaboration of Lee and Andrew I thought, ok, I don't like it but I'll give the team one more go. No Plan B was that go, and it's the last one I'll give. The story is weak and lacking any cohesion, the characters are repetitive and wooden, Reacher himself is a pathetic caricature of past outings, and I simply cannot be bothered finishing this book. Not even Jeff harding seems to be able to summon any enthusiasm for this one.
I have really enjoyed my journey with Jack None Reacher. I think I'll let us go our seperate ways before the bad taste in my mouth becomes permanent.
If you love Reacher, you'll hate his.

I've enjoyed many Reacher novels until this one. It's disconnected narrative and over-detailed descriptions finally bored me senseless. This one goes back. Reacher fans disappointment awaits! Give it a miss.

I normally enjoy Reacher books but the narrator in this case was unbearable. I must have tried a dozen times to get through it. Not possible. I’m sure the story is worth 5 stars but I couldn’t get through the book so I really don’t know. Really, Jeff Harding is painful and I’ll be careful not to buy anything else he’s on.
He is so grating that I finally gave up on No Plan B in favor of a book about the economic development of the early Māori.
The narration is that bad.

Impossible to listen to this narrator

The intonation is this narrator is hard to listen to.. It is so annoying that i stopped listening even though I love the series.

All good. Well written, well read and gripping in most parts and very easy to listen to

I had to force myself to listen one through. Narrator read this like a pre-school kid trying to read first time. One sentence at a time!
And whenever he tried to alter the voice for a different character, they all sounded the same nasal voice. Frustrating. Anyway, I will not listen to any more books by this narrator, that was clearly not for me.

Could not make it past the first chapter

I cant say anything about the book itself but the speaker is absolutely not for me. I just can‘t make it through his monotone delivery …

had to buy the book wice... Can't stand Harding!!!

haven't listened to the book yet. bought it without looking for the narrator. and again bought the wrong one. since I can't stand the way harding reads the books, I had to buy it a second time. when he reads, each sentence ends the same way! it's reminds me of torture.... so ... Brick it is for me. no more Harding. ever.