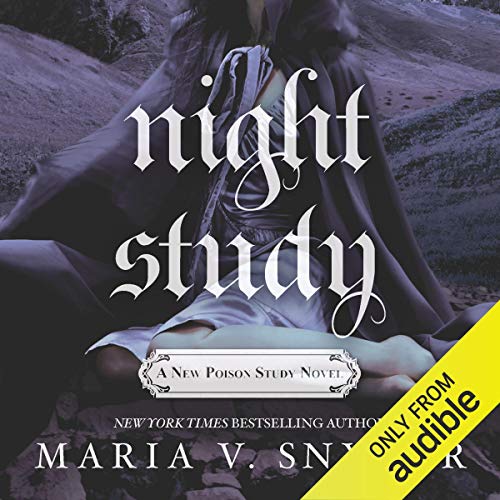 New York Times best-selling author Maria V. Snyder transports listeners back to the realms of Sitia and Ixia in an exciting new Study novel full of magic, danger, and intrigue.

Ever since being kidnapped from the Illiais Jungle as a child, Yelena Zaltana's life has been fraught with peril. But the recent loss of her Soulfinding abilities has endangered her more than ever before. As she desperately searches for a way to reclaim her magic, her enemies are closing in, and neither Ixia nor Sitia is safe for her anymore. Especially since the growing discord between the two countries and the possibility of a war threaten everything Yelena holds dear.

Valek is determined to protect Yelena, but he's quickly running out of options. The Commander suspects that his loyalties are divided, and he's been keeping secrets from Valek...secrets that put him, Yelena, and all their friends in terrible danger. As they uncover the various layers of the Commander's mysterious plans, they realize it's far more sinister than they could have ever imagined.

Waiting inpatiently for the next book because of the cliff hanger end. Other wise I love it.

I missed these characters so much, every plot, every joke, every critical moment keeps me on my toes and wanting more.

I love the series and this book is just as amazing

Absolutly loved it and can't wait for the next one!! finished it in a day!

And the plot thickens

I love all of the study books but really enjoyed the revelations for Valek and how he deals with them. and Gabra Z. is as usual, perfect with these books!

Inconsistencies increasing with each book?.

I really like these stories, however each new book brings more inconsistencies. Originally, she created a fantasy world, but she’s gradually incorporating things from our current world into her fantasy world. Like Quarter horses, an American breed, and Thoroughbred horses, a British breed. Or instead of a character sending a messenger, they're going to message someone. Those are just two examples of many. It's as though the author has gotten lazy with her created fantasy world.

One of the better series of books I have read in a long time. Enjoyed it greatly, had to buy whole series halfway through the first book because I knew i wouldnt be able to stop.

I love this series...hard to wait for my next credit to get to the next book!

I really like this series and the writer will keep you on your toes. I love the plot and the charter development. I have found a new author to keep track of.

Enjoyed. the 5 book in the Poison Study series. Glad everyone of the characters I enjoyed made through the book to the end. Hope they make through the next book.