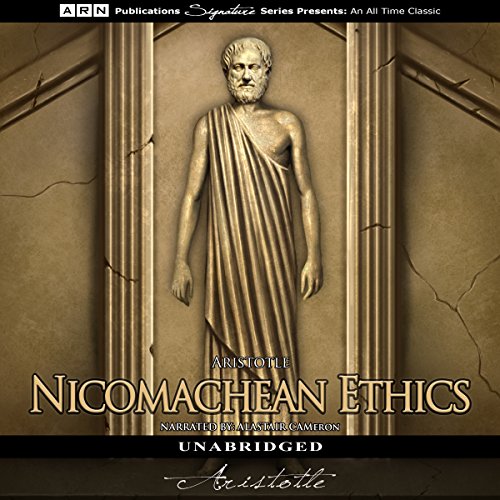 Aristotle is widely considered to be one of the foremost figures in Western thought. As a student of Plato, he developed a wide range of interests, including politics, morality, and ethics.

In Nicomachean Ethics, Aristotle delves into the question of what is best for mankind and humans as individuals. His conclusion is that happiness is the best possible human condition, though he is not referencing the emotion of happiness. Instead, Aristotle concludes that true happiness comes as a way of life in which the individual contributes to the good of his community, as well as his mind.

Nicomachean Ethics also discusses subjects such as the importance of moral virtue, responsibility, and friendships on one's journey to creating a happy life. Throughout history, there have been a number of authors inspired by Aristotle's works. Today, authors of moral works still frequently reference his writings.

First, hats off to the narrator on doing a wonderful job with this narration. It was read and paced very well. The book, Nicomachean Ethics is one of Aristotle’s most important works of philosophy. It provides a window into the past and how philosophical thinkers like Aristotle viewed politics, virtue, and ethics in ancient Greece.

Anyone with an interest in political and ethical theory should enjoy reading this book!

Imagine you are chatting some girl up on FaceTime, she's pretty cute and you heard good things. She's down to come over, sit on your face, all that. Life's good. Next day she shows up, but she's a 7'9", 1600lb centaur who is going to literally hold you to your word, and now you are done for.

In all seriousness, this is a great intro to the rest of Aristotle and is probably more approachable than Politics or Metaphysics (literally all I have read, so yeah). Between being incredibly densely written, translated, and then narrated as an audiobook, Aristotle can be hard to follow or outright crushing, depending on your familiarity with Greco-Roman philosophy and the quickness of your wits. I would absolutely recommend this audiobook as a companion to studying written text.

It was hard to follow the narrator. Maybe due to my slower speed interpreting the old vernacular. It could have been slowed down a bit, in my option.

Aristotle is certainly a product of his age. He is obsessed with logical consistency, sexist, pro-slavery, and mildly anti-democratic. Yet for all that, there is so much—so very much—we can learn from this classic. The relation of pleasure to happiness, the importance of honor, the imperfection of human beings—a worthwhile read.