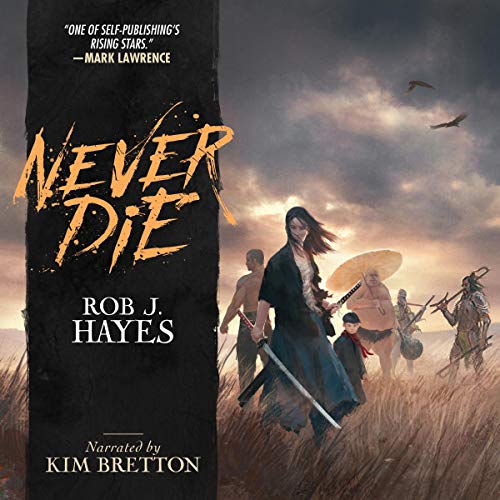 Ein is on a mission from God. A God of Death.

Time is up for the Emperor of Ten Kings and it falls to a murdered eight year old boy to render the judgement of a God. Ein knows he can't do it alone, but the empire is rife with heroes. The only problem; in order to serve, they must first die.

Ein has four legendary heroes in mind, names from story books read to him by his father. Now he must find them and kill them, so he can bring them back to fight the Reaper's war.

What a treat! Beautiful writing, gripping story and absolutely spot on narration. I highly recommend this audiobook. Found it completely by accident and couldn't be more thrilled. Will be checking out Rob Hayes and Kim Bretton's other works on Audible.

The Samurai fiction you've been looking for!

After watching shows like "Samurai Champloo" and "Ninja Scroll", I never understood why I couldn't find any books with a similar feel. This novel changes the game completely. If you are a fan of anime or any film by Akira Kurosawa then stop reading this review and immediately pick this book up. The action is so well written that you can completely see and feel the battles in every detail. Rob J. Hayes humor and wit shows through as always. Even though it is a book surrounded by action, the characters were not one dimensional and I found myself rooting for those that I didn't originally. I believe it's only a matter of time before this is picked up to be made in a different form of media, but don't let that stop you from starting here. I had read that this is a "stand alone" novel, but that Rob J. Hayes may write more stories in this world. After finishing this novel, I was ready to start again from page 1.


I was very excited to hear about this book coming out but as my schedule is very busy, audiobooks are the way I consume most books. So finding this on Audible was perfect.

I was given this free review copy audiobook at my request and have voluntarily left this review. Big thanks to Rob J. Hayes for the opportunity and wild ride!!

Life of a Samurai

reminded me of "Seven Samurai" in feel

If you enjoy Eastern lit - worth a credit

First, let's talk about the audiobook narrator. Kim Bretton did an excellent job. While a couple of her male voices (yes, she has several, and most are great!) leave a bit to be desired, overall her voices are amazing! But where she really shines is in her tempo changes. She knows just what reading speed is appropriate for each scene and absolutely nails it!

I'll admit that at the start of the story I was pretty confused and didn't really understand what was happening.

I can't speak to the accuracy as I don't know a lot about it, but based on content I'd say there is a strong eastern mythology influence at work here. Between the monsters, the magic system, and the culture differences there was a lot to take in.

There is a lot of terminology that I don't rightly understand and had to piece together via context throughout the story. Particularly the titles each warrior has. I was several chapters in before I realized Emerald Wind and Century Blade were people and not things.

I honestly would have enjoyed a deeper dive into the characters, Cho in particular as I find her fascinating.

But what we have is a fast moving, almost thriller-eske story that flies by without feeling rushed. There's not a lot of time spent on internal monologue or introspection, but with the setup of this story it works beautifully.

And speaking of beautiful, let's talk about the writing for a moment. There are a handful of instances of clunky phrasing and some passive voice that doesn't seem necessary, but elsewise the writing here is gorgeous.

It's mostly of the simple, straightforward variety that I absolutely love. I'm not a fan of flowery, lyrical language and there is very little of that here. What little there is seems to have been included for emphasis in a way that works wonderfully.

Although, as I mentioned, there's not a lot of time spent on introspection, there is still some excellent characterization.

Every warrior has a trademark technique that is uniquely theirs, and seems custom tailored to their personality. Or perhaps their personality conformed to the needs of the technique. It's difficult to say with certainty.

Similarly, every character has at least one or two quirky personality traits that really makes them stand out as an individual.

Now, at the start the story seems extremely straightforward and, it must be said, a little silly and simplistic. Very easy to sum up in one sentence.

However, there's so much nuance, so many twists, and so much depth added throughout the story that I can't bring myself to type that simple sentence.

This is a story that will make you laugh. You'll want to strangle at least one character. You'll hate at least one. You're going to wring your hands in frustration. And in the end, your heart will break for these characters.

And at least one of the twists is going to hit you like a ton of bricks, leaving you dazed and unsure what to think or how to feel.

It's unusual for a twist to catch me competely unprepared, but one of these did so and it was glorious!

This book has the kind of explosive ending that readers dream about. All the promises made throughout the book come to fruition, even the ones you didn't realize were being made until you see them being fulfilled. Every disparate thread is weaved into a complex tapestry that can't help but blow your mind.

I'm normally the first to admit that no book can be for everyone, but I'm really struggling to come up with a type of reader who wouldn't enjoy this book.

Okay, here's one. If you insist on major character arcs, if you thrive on characters starting weak and growing strong, then this probably isn't the book for you. The whole quest is about gathering the greatest warriors in the world to fight an impossible battle.

Also, if there is no part of you that is even open to Eastern-themed fantasy or chi as magic (basically), then this probably isn't a good choice.

For everyone else, READ THIS BOOK!

Finally, full disclosure.
I received a free copy of this audiobook from the author and am voluntarily leaving this honest and unbiased review.

A solid piece of evidence that self-publishing ha really come into its own, substantially better than a number of books I've read that went the traditional route.

The book is very heavy on (enjoyable, varied, and well-written) fight scenes. If that's something you actively dislike, subtract a star from your rating. If it's something you enjoy, add one. There is a very simple test to know if this book is for you: It is essentially a mixture of a wuxia story and the "assembling a team of misfits with unique skills for a suicide mission" variety of action film—with some fun twists—in book form. If that sounds like something appealing, you will almost certainly enjoy the book. If it doesn't, you almost certainly will not. Fortunately, I fell on the former end of that particular equation.

Initially I wasn't sure how I felt about the narration; an odd thing for me given that I normally have very strong opinions on a narrator within the first 5 minutes or so. As I got a but further in, it really started to work for me. In the end I would say the narration was solid and fitting for the genre and content. The vast majority of character voices felt appropriate given their characterization, which is not as common as one might hope in audiobooks.

This audiobook was provided to me for free at my request in exchange for an honest and unbiased review.

Good books are hard to find. When you do finally find one you want everyone else to read it. But how do you get someone to give a book a try based on a review? This is one such book. And Yes, I believe you should read it.
While I was skeptical at first, I quickly found myself immersed, and unable to put the book down. Never Die is an action-packed, plot-driven narrative with compelling characters in a setting that feels truly surreal. The story is intriguing and steers clear from tropes, instead it creates something altogether new. If you have misgiving or are wondering if this is worth your money or you time, all I can say is give Never Die a try.
I received a free copy of this book in exchange for an honest review.

I loved the strory however sometimes I could not take it seriously on how the narrator performed it. She was no means a bad narrator but her different choice of accents really took away from the martial arts epic feel.

I loved this novel, the use of a wuxia inspired setting and influence from japanese and Chinese cultures was something fresh. Additionally the delivery was great, the writing pace, tone and style were all top notch as well. The only critique I have is that I wish this story had been more fleshed out, especially considering it's a standalone novel. The story elements, characters and setting would have all benefitted from a couple hundred more pages of content. That said, this book and audiobook were a great read and I would recommend to anyone.

like a mindless action movie, but book form. entertaining enough to get you to your next read. great performance