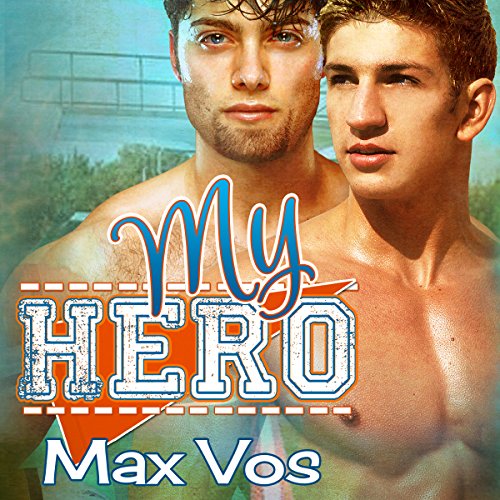 This is a gay male romance with explicit sexual situations between men.

When he was 16 years old, Rich Miller saved a young man from drowning at his local pool. Little did he know that years later, as a senior in college and Olympic diving hopeful, Rich would meet up once again with Johnny Milloway, now a big football player - and when Rich says big, he really means "bear". The shy jock remembers his saviour, and the two men become friends.

Johnny isn't put off by the fact that Rich is gay. In fact, the more time he spends with Rich, the more curious he becomes. Johnny wants to know all kinds of things - what it's like to kiss a guy, for instance. Only it doesn't stop there...

Rich finds it difficult to believe that this relationship can go anywhere. Johnny is straight, and Rich isn't prepared to deal with the heartache he knows will come his way in the future. He has enough on his plate as it is - the worlds are just around the corner. His father would rather watch a football game than spend time watching his son dive. What he doesn't count on is Johnny, who can be very determined. And having Johnny in his life proves to be a catalyst for some pretty earth-shattering changes.

Jared Bradford delivers a wonderful performance. He adds a richness to the story, drew me in, and kept me engaged and entranced until the very end.

My biggest complaint is that Johnny is pretty immature relationship-wise, which is somewhat expected given his age, but no less aggravating. Even though I understand the decisions made, it doesn't make me any less rage-filled when it happened.

While I had some issues with the story, they are pretty quickly resolved, there's a very sweet HFN/HEA, and I enjoyed the narration thoroughly.

Gay for you story with a raunchy edge.

What did you love best about My Hero?

The slightly raunchy edge Vos gave the story that sets it apart from other GFY type stories.

The way the two characters were with each other for the most part.

Which character – as performed by Jared Bradford – was your favorite?

Johnny's mom, that woman was a spitfire! And his cousin Anita, I want to be her best friend.

It was and I came close. I couldn't put it down or focus on anything else, this book had all my attention.

When Rich Miller, the dorky, openly gay, Olympic hopeful diver is befriended by Johnny Milloway, star football player slash super jock… Rich is a bit dumbfounded. Until Rich learns that the big, burly football player is the same lanky teenager Rich saved at the local pool when they were teenagers. Johnny is overly protective of Rich from the start, and Rich doesn’t quite know how to act around him. The two become fast friends, taking trips home together and working out in the mornings at school. One kiss changes everything.

Johnny is confused and curious all at once. He doesn’t understand his body’s reaction to Rich, but he wants to explore it. Rich is conscious enough to realize this is an ill-advised adventure; but he is already falling hard for the big, burly, hairy, super sweet jock. The two make a pact; they will explore the mutual attraction only if they remain friends regardless of the outcome. When one heart is certain while the other is clouded in a haze of confusion, someone is bound to get hurt.

I procured a copy of this audio for a review not really sure I would enjoy it in the end. Let me tell you, I was lured in after the intro and Bradford’s retelling of Vos’s words kept me engaged throughout. I am a huge fan of gay for you stories and I really enjoyed how Vos gave this particular story his own rusty edge. Rich is older, more established, and confident and smart. While Johnny may be younger and oddly, a bit naïve, he is massive and intimidating. His team mates gave him the nickname ‘The Dragon’ and I can assure you, it fits. They are inexplicably drawn to each other and I found myself rooting for them to really make it work.

I could have done without the cheating, well, let me correct that a bit, I could have done without the way it played out. I’m also not a fan of angst and I found myself at one point toward the end rolling my eyes, it was that bad. And Rich’s best friend Ruthie, I wanted to strangle the life out of her, she drove me insane. Aside from that I really loved every dirty, filthy, raunchy passionate tryst these two had. I loved watching Johnny grow throughout the story, aside from a few lapses in judgement, and I especially loved that Rich gave him hell for it.

And now for the narration portion of my repertoire, Jared Bradford, I am loving his voice. Both young men had a touch of southern in their roots, to be expected given where they lived, with Johnny’s a bit more pronounced. Even if the story hadn’t been clear on attitude, mood and demeanor for the characters, I would have known their mindset by the different tones and inflections in Bradford’s voice. I think my personal favorite though was Johnny’s mom, she was a spitfire. And his cousin Anita, I want to be her best friend.

If you are looking for a gay for you story with a raunchy edge that is so well voiced, grab a copy of My Hero. I’m on pins and needles now hearing that there will be a sequel, My Olympian, out soon. Write faster Max!!!

Hero's abound in this one!

Mr Millaway, as Johnny's father, he is that wonderful cross between classic man's man and accepting role model. His easy going nature and wise words were a lovely counterbalance to the underlying "teen angst" that is expected with young lovers.

Which character – as performed by Jared Bradford – was your favorite?

Johnny was brilliantly depicted. Jared Bradford used dramatic reading to perfection to bring this character to life. The addition of believable snotty crying and breathlessness was wonderful.

When Rich's dad explains his lack of support for his son, this was an emotional and believable moment.

Max Vos's well loved story My Hero has been brilliantly adapted to audio by Jared Bradford. Jared brings a truly dramatic reading to this book. (That isn't always seen in audio books- and I appreciated his take on the characters). This is a college romance with all the foibles and dram that that entails with the added steaminess that only Max can offer. Well done fella's. Great listening pleasure.

I knew I'd love this and I did!

Awesome story, great memorable characters, HAWT sex! :-) Hope Max Vos hurries with Book 2 and with putting his other books on audio. I believe this was his first audiobook, and he nailed it! I've read shorter works by him and he never disappoints, Good job, Jared and Max. Highly recommended for the sweet MM romance it is!

I truly enjoyed this - Jared Bardford did a great job! Love it!!! Highly Recommend it!

Great book. I read it first then I read the audiobook. After reading it the listening to it really brought the book M Her by Max Vos to life.

Two things I love are audio books and Max Vos books and when you combine the two you have brilliance. Jared Bradford does an amazing job narrating My Hero. His voice changes perfectly to suit the characters and his female voices are great. This book flows well and is a fabulous listen.

I have listened to the book a couple of times now and I have been transported to back to Tennessee, to college and into the world of jocks. The characters are genuine and well written. The audio brings life to the words. I loved every moment of this audio book. Thanks Max and Jared, this is truly wonderful.

Will warm your heart!

OK...so there were just a few parts of this book that were a bit of a stretch but this is an HEA kinda book after all. That said, it was a fun read as well as listen (I almost always buy the kindle book and use whispersync in order to enjoy both). It is a story of trust, honesty, mistakes, forgiveness, and love. In addition to the author writing a pretty good story, I must say I was impressed with the voice artist, Jared Bradford. I've never heard of Mr. Bradford but very much enjoyed his enthusiasm. I am getting so tired of buying an audible book, only to have the narrator "read" the story. Thas was definitely not the case with Mr. Bradford. His female voices were not perfect but you can tell he really got into every character. Kudos to him as well as the author.

This book is one of the first MM novels I read and I’ve read it several times already, so of course, I jumped at the chance of listening to the Audiobook and I wasn’t disappointed!

Rich saved Johnny’s life when he was 16 and Johnny was 12 years old. They hadn’t seen each other until they ran into each other, quite literally, when Johnny starts up at Rich’s college. They become best friends and when Johnny becomes curious, they start having sex. Johnny is straight, though, no matter how much he enjoys what he and Rich do in bed, and Rich slowly falls for his friend, which can only lead to heartbreak. Add the pressure of preparing for the Worlds and Rich’s estranged relationship with his father and it’s a recipe for disaster, or is it just what Rich needs to finally put everything in perspective?

Jared Bradford did a great job at bringing to life this fantastic story. He has a great voice and I loved that he showed us all the different emotions through it, laughter, love, sadness. I would’ve liked it more if anger had been as easily portrayed as those others, but that is just me being picky.

Definitely a recommendable book/audiobook I'd love to read/listen to again!

I loved this book!

A hot, sexy tale of Rich, a diver, who is gay, and Johnny, a football player - who isn't.... until he gets curious.
From Johnny's first tentative kisses to two boys who can't keep their hands off each other, this book doesn't disappoint.
I loved the way Rich and Johnny grew as a couple, and it was great to see how Johnny's family supported him as he discovered a side to himself that he never knew.
And yes, I was sad... You'll know when you get there, believe me.
But the ending..... sigh.