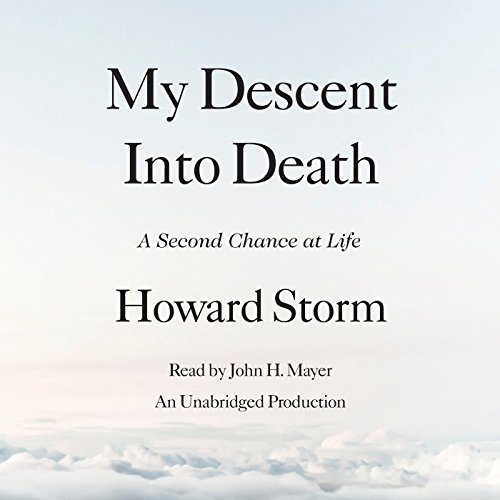 My Descent into Death

Not since Betty Eadie's Embraced by the Light has a personal account of a near-death Experience (NDE) been so utterly different from most others - or nearly as compelling.

In the 30 years since Raymond Moody's Life After Life appeared, a familiar pattern of NDEs has emerged: suddenly floating over one's own body, usually in a hospital setting, then a sudden hurtling through a tunnel of light toward a presence of love. Not so in Howard Storm's case.

Storm, an avowed atheist, was awaiting emergency surgery when he realized that he was at death's door. Storm found himself out of his own body, looking down on the hospital room scene below. Next, rather than going "toward the light", he found himself being torturously dragged to excruciating realms of darkness and death, where he was physically assaulted by monstrous beings of evil. His description of his pure terror and torture is unnerving in its utter originality and convincing detail.

Finally, drawn away from death and transported to the realm of heaven, Storm met angelic beings as well as the God of Creation. In this fascinating account, Storm tells of his "life review", his conversation with God, even answers to age-old questions such as why the Holocaust was allowed to take place. Storm was sent back to his body with a new knowledge of the purpose of life here on earth. This book is his message of hope.

This near death experience is consistent with the teachings of the Bible. Coming from a man who does not believe in Jesus before his experience it gives me hope that one day through prayer my loved ones who continue to reject Jesus can be changed.

Fresh perspective on Christian faithwalk while remaining relatively orthodox. those folks steeped in thier own brand of religious culture such as fundamentalists and very conservative Evangelicals, as well as "anything goes" types of liberal Christians will most likely become so offended by a few topics discussed that they will not let themselves be blessed by this testimony. but if you hold a "generous orthodoxy" view, and if you have come to a place in your faithwalk to realize God transcends all of our manmade religens because He is incomprehensible (although God generously is present and makes Himself available to us within all religens that seek the Truth and the Way and the Life; drawing us ever closer to Him in Christ Jesus), then you will very much appreciate this book and Howard Storm's perspective.

Really? What a hyped up description.

The book description say pretty clearly that we're to hear all the gruesome horrors of his time in hell.. SPOILER: "Hell" is about 10 minutes of following two suspiciously behaving men on a path who keep saying "come on, hurry up." I'm not kidding you. That's hell. *** The rest of the book is some guy's attempt to explain how a PERFECT god could possibly create something that isn't what he intended it to be. Ahem. Yeah... Good luck with that. You'll have to start by making up new definitions for the word like "perfect."

MR. PERFECT:
HI, I'm Mr. Perfect. By definition, everything about me is perfect, including everything I do and create. Except for people. I created them to be one way, but look at them. They're doing things they're not supposed to do!
There's something wrong with them!! How can this be??😲
.
MR. LOGIC:
Hello, Mr. Perfect... Are you saying these creations of yours are exhibiting some kinds of...ahh... Imperfection?
.
MR. PERFECT:
YES! that's just it! I'm perfect, so my creations should be perfectly doing what I designed them to do... But they're not!
I sure hope one of them will write a book to explain to me how this is possible!!

MR.LOGIC:
I'm so sorry, Mr... ah... sir. Perhaps this dictionary may help.. Here, take it... I've bookmarked some pages for you.. The pages with definitions for the words Perfect, Imperfect, Delusional, Incompetent and In the very back I've tucked away an official "change of name" form... You know, just in case it comes in handy some day.

(if you are reading this and can convince yourself that a perfect being can make imperfect things... By accident.. Then I'd like to shake your hoof to congratulate you. Because learning to read is quite a remarkable accomplishment for an ass! Hee-haaw! 😂)

This book should be added to the New Testament. Thank you for sharing your story

What an awesome story. I saw the author talking on YouTube, and was compelled to get this book. When he talked about his story, I was so moved by his sincerety. If you have any interest in GOD, youll be glad for this purchase. Thank you to the author for sharing his story.

Excellent. This author is very genuine.

This book seems to answer the fundamental problem of how Jesus is inclusive and the savior of all even those who don’t know his name. The explanation of heaven hell and life on earth are the most coherent I have heard.

Thank you and bless you.

I could agree more and I'm excited to revisit and apply these lessons.

A great book to help christians or anyone seeking to know God. Amazing near death experience!

Great Story and pleasant to listen to on Audible

Great, interesting, and uplifting story by Howard Storm. Will definitely be recommending this book to others!

I loved this book. I finished it in one day. It connected with me and made me want to be a better Christian.

The book is well written. Its An inspiring story.

Everyone should give this book a listen... provides one mans unlikely path toward god. well worth the read.