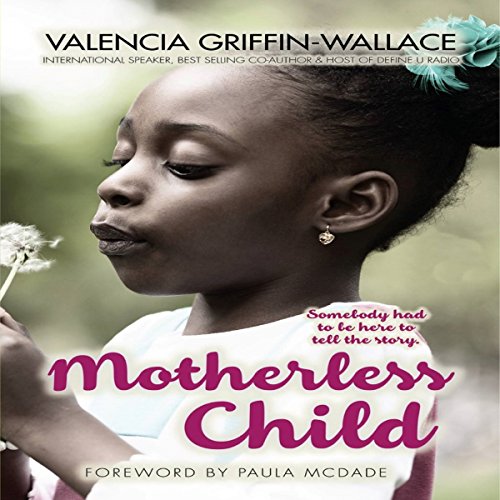 Raised by a mother who turned to drugs to relieve past pain, Valencia had to grow up fast. Being welcomed by gangs, being shunned by her family, and finding motherhood early should have sealed Valencia's fate, at least according to all the statistics.

Open, honest, and often raw, Motherless Child exposes a falsehood far too many of us have been led to believe - that those raised in addiction will fall victim themselves.

Instead, she found an inner strength born of determination, resolve, and forgiveness.

Her heart-wrenching story unfolds through glimpses of her own life and recollections of her mother, a woman she never knew till long after her death. Raw, poignant, and brutally honest, Motherless Child steps into the void and reveals the hope, and forgiveness, the data ignores.

What made the experience of listening to Motherless Child the most enjoyable?

It is difficult not to be inspired by a person that needed to overcome the bad cards that were
dealt to her.

The Author of course is the story.

She did her best to make the listener understand the writers life and how far she had come.

A quick story of the author's tough upbringing...

Motherless Child, by Valencia Griffin-Wallace clock in at two hours and fourteen minutes. It's a quick listen, and doesn't lag at all. That being said, it's unfortunately a story that we hear too many times nowadays. The author had a rough, tough upbringing, with a mother who cared more about drugs than taking care of her children and a father who had another family that he was present for. Ms. Griffin-Wallace turned to gang life and though her description of gang life was much "nicer" than many of the typical stories you hear of gang life, I still empathize with her. It sounded like the worst thing that they did was go tagging, which seems pretty lightweight for gang life. Anyways, the story was a good, easy listen and while I would have liked the author to have perhaps gone a little more in depth with her story, as I feel there are tons of details missing and more to tell, it was a good overview and definitely worth a listen if the summary sounds good.

Andrea Jones-Pierre did a good job with the narration. She was very easy to understand and read with a good cadence. She did a good job setting the scene and differentiated the various characters voices, both male and female, well. I'd listen to other performances of her in the future, no problem. I was voluntarily provided this free review copy audiobook by the author, narrator, or publisher for an honest review.

While this is a personal story of a woman's fight to overcome an upbringing in culture of abuse, poverty, drugs, and gangs, to me it seemed not much different to so many other stories that are so very similar. In fact, I have read of much worse environments out of which other people have come. While I can sympathize for those that are forced to endure such hardships, and am thankful that some persevere through the other side, this story just seemed like 2-hours of repeated scenes of physical and mental abuse resulting in fights and relocations. It is only in the final 20-minutes, or so, that we get a glimpse of the authors personal victories over her circumstances, followed by 5-minutes of poetry readings. Perhaps, and sadly, it is a case of me having read or listened to so many similar stories that this one just didn't separate itself from any of the others.

Having said that, this review is not a reflection on the hardships the author had to endure and overcome, but simply a review of her work, It also needs to be said that the narrator, Andrea Jones-Pierre, did a fine job with the various voices from the street language to the male voices, she seemed to nail them all; truly a case where the narrator sets the scene very well. Although I found this particular story to be about a "middle of the road" rating, I would recommend it to anyone that has not read or listened to a woman's story around the topics covered in the work. Certainly a story that needs to be told, I look forward to the day when there are not so many of them needing to be told. God speed . . .

A review copy of this audiobook was provided by the author, narrator, or publisher at no cost in return for this unbiased review. If you found this review helpful, please take a moment to click yes below.

This was a good read.Miss Griffin-Wallaces upbringing was tough,yet she perservered.It brought back memories for me long forgotten.I liked that she said it was for ALL us motherless children.Andrea Jones-Pierre was a fine narrator.I was given this book by the narrator,author or publisher free for an honest review.

I feel like reading this changed me. It was a timely reminder that you can't judge other people fairly because you don't know what has happened in their life to being them to where they are.

Valencia is an inspiration, through telling her story she shows that you can go through a lot of adversity and come out the end a whole and good person. Her strength is amazing and I'm grateful to have the opportunity to learn about her life.

The narration is excellent, the accents are really well done and the delivery helped to draw me into the story.