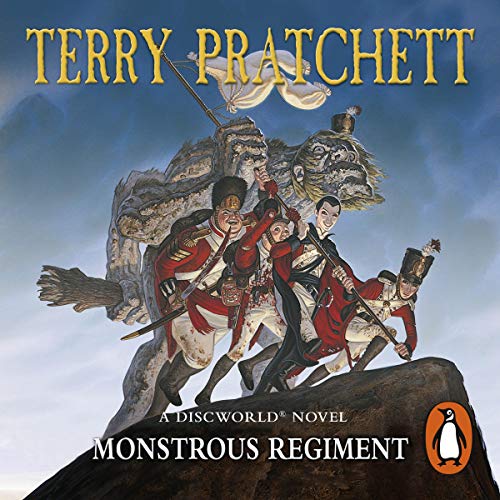 It begun as a sudden strange fancy...Polly Perks had to become a boy in a hurry. Cutting off her hair and wearing trousers was easy. Learning to fart and belch in public and walk like an ape took more time. And now she's enlisted in the army and searching for her lost brother.

But there's a war on. There's always a war on. And Polly and her fellow recruits are suddenly in the thick of it, without any training, and the enemy is hunting them. All they have on their side is the most artful sergeant in the army and a vampire with a lust for coffee. Well...they also have the Secret. And as they take the war to the heart of the enemy, they have to use all the resources of...the Monstrous Regiment.

War has come to Discworld ... again.

Ok, I have to admit I surprised myself. I had bought this book in an airport somewhere travelling from there to here. I read it and enjoyed it but that was all. Of all Terry Pratchett's books, I viewed one on video and bought two paper versions, the other twenty plus have all been audio books. I have always thought in the past that my own imagination was far more vivid than a movie or an audio. Hitchhikers Guide to the Galaxy movie my version way, way better and it made some sort of sense. Now I have listened to this same book read by Stephen Briggs and concede that he, Nigel Planer and Tony Robinson bring Pratchett's books to life much better than I ever could in my own mind.

The stories always make a point and always speak to the human condition and what fools we are.

Buy it, enjoy. Don't laugh too hard or the people in the car stopped beside you or that poor person next to you on the train will think you are having some sort of weird seizure.

Save trees, listen to a Discworld saga.

Pratchett and Briggs: can you go wrong?

Seriously, people, Terry Pratchett's work is one of the great under-rated treasures of the English language. And whenever his long-time collaborator, Stephen Briggs, is handling the narration, you know you're in for a treat.

Once upon a time I saw myself as far too highbrow and learned to expose myself to books with trolls, vampires, and werewolves in them. If you, too, shudder at the thought, Dear Reader, then I must tell you now - in the case of Terry Pratchett's work you are wrong in your assumptions, to the point that you may have to consider the possibility that they're irrational prejudices!

Certainly, some of the early books are exemplars of rather more conventional fantasy, albeit with a few decent jokes thrown in, but later works constitute a wonderful, always empathic, satire of human society, and are strongly Humanist in their sympathies, despite the various fantastic species that gad about in them. Oh, and they're funny, and have cracking plots to boot.

In 'Monstrous Regiment' we see the adventures of a Pratchett staple - the loyal, kind, and good-hearted young heroine who becomes bolder and more confident in her abilities as she faces the various obstacles the narrative throws at her.

I compare Polly Perks and the young witch Tiffany Aching, who appears in the 'Hat Full of Sky' "children's*" novels, to the deeply sympathetic, and ultimately empowering, young female heroines of Hayao Miyazaki, as seen in animated masterpieces such as 'Spirited Away' and 'Howl's Moving Castle'.

The story involves a war in Borogravia, a fictional nation in Pratchett's fictional Disc World, where society is heavily - and amusingly - restricted by the almost endless (and constantly revised and updated) list of those things that are an Abomination Unto Nuggan, the national deity. Things such as garlic, cats, the colour blue, sneezing, and jigsaw puzzles.

Polly sets out to rescue her somewhat feeble-minded brother, Paul, who has gone away to the war that no-one dares say Borogravia is not winning, and disguises herself as a young man in order to enlist and seek him out at the Front...

As you'd expect from Pratchett, much - always good-natured - fun is poked at jingoism, religion, and warfare.

And, as you'd expect from Briggs, the voice characterizations are excellent, and the comic timing is impeccable.

Highly recommended. If you're new to the Disc World this is as good a place to start as any...


*News to me! But that's what they officially are, apparently...

It's Terry Pratchett - really it's not necessary to say more... but... Pratchett's look at the military, the pointlessness of war, recruiting campaigns as well as the place of women in warfare is a totally enjoyable presentation. I loved the book and am now enthralled with the audio.

Polly is an innkeeper's daughter... until her brother Paul were caught as a prisoner of war. Polly became Oliver and joint the army. This is where the fun starts, but Pratchett gives the story an interesting twist. (I am wondering if he didn't overdo it a bit in the end.)

Steven Briggs is his old excellent self, which makes the listen very enjoyable and definately worthwhile.

The story is definitely better than "Unseen Academicals" and "Making Money" but does in no way surpass "Feet of Clay" and the city watch novels.

As usual, Terry Pratchett delivers fantasy, comedy and sharp eyed comment about society, this time about the army and equal rights. Many observatiosn are right on and to the point, but however funny it is, the same "joke" or plot over and over may be stretching it a little thin, thus the reason for only giving 4 out of 5.


Stephen Briggs does a wonderful job as a narrator, he's one of the best men doing female voices (and oh boy, he needs that talent in this one) that I have ever heard.

As fantastic as all the others

Stephen Briggs narration is perfect and adds to what is already an incredible story. Brilliant

War and Peace on Discworld

Every Pratchett is a joy

Stephen Briggs is an excellent performer and I always enjoy every bit of his read!

It seems so much more impactful now, this wonderful story, and it is still as wonderful as when I first read it over 10 years ago. Mr Briggs does a great job portraying so many different ppl with his different voices. I just thought the shouty bits could be shoutier.

I’ve read this book before and it’s a Pratchett so I know it’s funny, but THIS happens to be one of his better stories and Mr Briggs has the art of comedy down to a pat. His voice/voices and accents are wonderful, his timing impeccable and his Englishness is soooo English. Prepare to look mad as you laugh out loud.

This is one of my favourite discworld novels. And I loved the way Stephen Briggs performs all the different characters. A great pleasure to listen to!

Loved it so much! Just blown me away!

Just have listened to the end of Monstrous Regiment and wished the story wouldn't have ended already.

I was so infected by Polly, Sergeant Jackrums "little lads" the great characters from human, to vampire to troll. The story and plott was just amazing!

Stephen Briggs told the story in a real enjoyable way!

Would have liked to hear it all in one go, timewise wasn't possible and like that I happy every day to hear the story evolve a little more!

Can recommend it to the fullest! Amazing!!!

It should have been "Thud!" instead of that i got monstrous regiment, that i already owened.