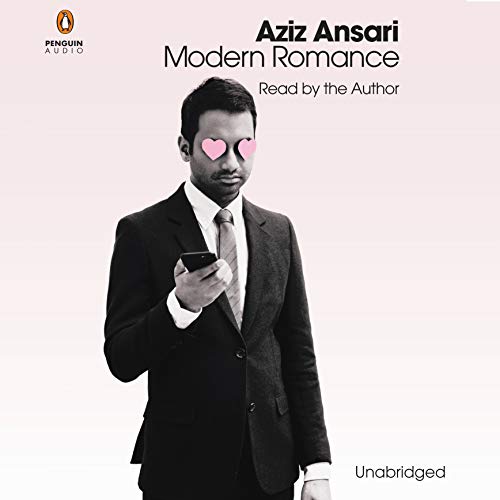 A hilarious, thoughtful, and in-depth exploration of the pleasures and perils of modern romance from one of this generation's most popular and sharpest comedic voices.

At some point every one of us embarks on a journey to find love. We meet people, date, get into and out of relationships, all with the hope of finding someone with whom we share a deep connection. This seems standard now, but it's wildly different from what people did even just decades ago. Single people today have more romantic options than at any point in human history. With technology, our abilities to connect with and sort through these options are staggering. So why are so many people frustrated?

Some of our problems are unique to our time. "Why did this guy just text me an emoji of a pizza?" "Should I go out with this girl even though she listed Combos as one of her favorite snack foods? Combos?!" "My girlfriend just got a message from some dude named Nathan. Who's Nathan? Did he just send her a photo of his penis? Should I check just to be sure?"

But the transformation of our romantic lives can't be explained by technology alone. In a short period of time, the whole culture of finding love has changed dramatically. A few decades ago, people would find a decent person who lived in their neighborhood. Their families would meet, and, after deciding neither party seemed like a murderer, they would get married and soon have a kid, all by the time they were 24. Today people marry later than ever and spend years of their lives on a quest to find the perfect person, a soul mate.

For years Aziz Ansari has been aiming his comic insight at modern romance, but for Modern Romance, the audiobook, he decided he needed to take things to another level. He teamed up with NYU sociologist Eric Klinenberg and designed a massive research project, including hundreds of interviews and focus groups conducted everywhere from Tokyo to Buenos Aires to Wichita.

great book for everyone but especial singles!

I love Aziz and that's why I chose to listen to this book instead of read it. So glad I did. I thought this book was going to just be funny but I actually learned a lot. I really found the stats and studies interesting.

What did you love best about Modern Romance?

There were several moments that left me laughing out loud. Aziz is a comedian, and its shown in his writing and narration. I could not put the book down during the first half, it was well researched, well read and hilarious. Aziz and his research partner provided great insights into modern dating and technology. I felt inspired and entertained!

The second half of the book, I felt more of Aziz's personal bias come into play when discussing marriage, sexuality and romance. I found the interviews of the elderly and marriage to be really entertaining as well as the differences in various cultures around the world. However, the final chapters on cheating were largely only supported by the Reddit thread and seemed to promote infidelity, disloyalty and open sexual relationships in lieu of marriage or committed partnerships. It just felt like the first half of the book was a hopeful and interesting analysis into finding love and the final few chapters left me feeling it was a search for sex instead.

Maybe you have to be younger to love this

I enjoy comedy, I teach teens, and I have three young adult children, so I thought I'd love this, but I didn't. It was okay. This is a stand-up comic's look at love in the modern age, much like my generation had Love American Style on TV in the '70's. I smiled at parts of this audiobook, and ended out listening in small bits. About halfway through, I just stopped because I had too many more appealing books waiting for me in my library. This was recommended to me by a young person. Even though I think of myself as young at heart, I guess I'm more of a Billy Crystal guy. While I can see Aziz's appeal, if you're middle-aged or older, this might not be as enjoyable to you.

I picked up this title on Jon Stewart's recommendation, and wasn't disappointed. And despite Ansari's merciless criticism of audiobook listeners/buyers, I was glad to have the audio version with the ad libs and the hilarious accents, which make this much more than a self-help book or a practical guide to dating in the 21st century. The only small issue I had with the structure of the book was the proportion of the latter chapters, which felt less researched and not as well thought out as the earlier ones.

recommended to parents of millennials

Modern Romance: An Investigation is an entertaining and of great interest to me as a mother of a millennial. I'm not as clueless as some, being conversant with computer and mobile technologies. Parents of millennials and teenage who don't understand your kids and their phones, this book could help bring you up to speed.

Glad I got the audiobook over print

Having Aziz read the book was very entertaining and I know that I had several "laugh out loud" moments that I woildnt have had of reading. He also offered many asides that weren't in the point book, and gave each listener a bunch of $h!t for being a lazy f#ck and not reading the actual book.

overall, highly recommended and a quick and entertaining listen.

This is the first time I am exposed to Aziz Ansari, but it won't be the last I hope. It's great that he took a comedic but also researched look at romance. The book is funny, surprising, and overall a fun read/listen. I might not recommend it to everyone, but if either you want to laugh at silly relationship situations or learn more about why and how we date,drop a credit and take a listen.

This is a light and funny book about the influences of technology on modern romance. Being in a multi-decade committed relationship, I never experienced the Tinder issues described in the book (not even Ashley Madison), but I mildly enjoyed the humorous, level headed, stories, statistics, and advice. This is not a stand up routine about modern romance. There are a few jokes, and a humorous tone, but the underlying purpose is serious. There are a lot of anecdotal stories, a smattering of research results, and statistics about the effects of social media and web dating.

I would recommend this book, to anyone experiencing the internet dating scene, particularly dudes, and particularly the final chapter with a summary and conclusions.

The narration (by the comedian lead author) was great. His tone makes potentially dry material approachable.

Not stand-up but still funny.

I initially thought this was a memoir, it turned out to be so much more. I never knew about the "rules" of texting in a new relationship or how to navigate the text/email/voice call protocols of the new generation. VERY interesting look into the dating habits of modern Americans.

I liked this book. it was very light but had a lot of good takeaways. Very humorous and entertaining with some golden nuggets of wisdom. Grab some Ramen or Tacos, read this book and you might end up at a bowling alley bar with the love of your life without having to ever bowl.

Worth a listen, even for old crusty folks like me

I downloaded this book on the recommendation of a person who heard that it was super funny and entertaining. I like Aziz Ansari in his role in Parks and Recreation, he makes me laugh, so I thought I would give it a go.

I read the reviews from others that felt that the book was good but was going to be a bore for anyone over the age of 40, and they were mostly right. Although I was fascinated by what the author reported related to dating in the modern age and different cultures, it didn't resonate with me in the way that I knew it would have if I were still young and in the dating scene. That being said, Aziz Ansari is a great narrator and there are some laugh out loud moments.

If you are under 40, still in the dating scene and interested in tips for singles, I can't see why you wouldn't read this book (best dating profile picture for a woman is a selfie, showing cleavage taken from a high angle with no pets or drinks in the picture!). If you are over 40 and in a relationship, its going to be a little bit boring but still worth listening to for the humor factor and also to get a little more with it on what the young kids are up to these days.

Clear recommendation! Great for everyone wanting to know why dating has become so complicated these days. Also Aziz is a great reader. Very funny and some of his lines are exclusive to the audio version.

Not was I was hoping it to be.

Chapter 8 was interesting. the rest is pretty much common knowledge about online dating, sexting and open relationships. I enjoy books that stimulates new ideas or challenge my believes but this one was kinda boring at first then kinda depressing once it goes to cheating and infedility. I was rather looking for a book that discusses romance in times where everyone is working, moving and changing and how we can maintain romance despite the fast pace life.

Really nice summary about modern relationships. The best of all is having Aziz himself reading it for you!