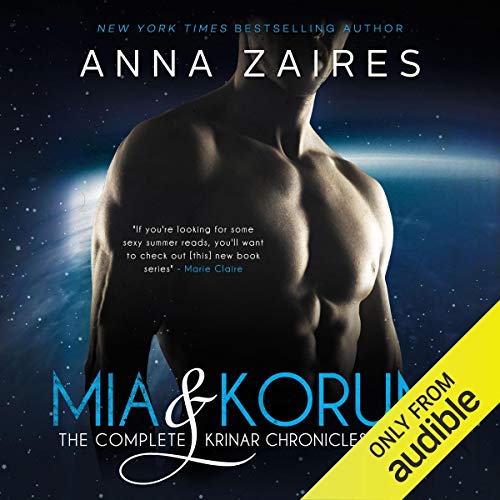 He started off as her enemy...and became her everything.

Like most humans, NYU student Mia Stalis knows little about the beautiful, mysterious invaders who’ve taken over Earth. Rumors about them abound: about their impossible strength and speed, their intentions toward Earth...their vampiric tendencies. None of it concerns Mia, though - until she catches Korum’s eye.

Powerful and terrifyingly seductive, the Krinar leader will do anything to possess her - and no human law can stop him. Helplessly drawn to her magnetic captor, Mia is plunged into the dangerous, secretive world of the Ks and forced to choose between truth and lies, her people and her lover...her freedom and her heart.

I must confess that I was excited by the deal with 30 hours of pure heavenly listening. What a deal! Yet, unlike other readers, I found that my interest piqued with second half of the book two and book all of three. This story was a decent listen.

Korum used bullying to get what he wanted and used less than moral (by our standards) means of doing so. He didn't have to abide by human laws so he did what he liked. Korum is not without a devastating sex appeal. He is ardent, arrogant, and demanding. He knows what he wants and makes it a duty to tell Mia what she needs—ALL THE TIME!!!! I have a problem with a man telling a young lady that she must do as she is told. It felt like she was under lock and key. She could not visit her family or leave when she wanted to. I was understandably sympathetic to Mia and her choices. She is 21, has saved her virginity, and has led a sheltered life. Now she’s being forced to be with a man who she doesn’t know well--Let alone his autocratic ways. She eventually betrays Korum. But since he has done nothing but take a young, innocent adult, and confine her, how could Korum be hurt at her betrayal in book one? (It’s Juicy) The only time he really gained my trust was in book two when he told her she could leave and he would let her. She then really had a choice to stay or leave. Prior to that he was a D*%#head!

The real problem I have with this book and romances in general is that the woman HAS to be virginal, the guy is a master in the bed! What I REALLY had a problem with was—the constant misinformation. No matter how it is done, having an orgasm the first time one has sex with well-endowed man (let alone alien) an orgasm is the last thing one should expect. He never checked on her, or took his time to make things easier. His member is larger than human males, so unless he has a Prince Albert, or extra massager on him, this is just unrealistic—never-mind ‘mind shattering’!

I was a little taken aback by the preachiness of the book. I love meat! I will not stop eating meat! I will add more vegetables, but come on—vegan? That was a turn-off. Despite my rant, I liked the world the authors built. The description of the Great Panic, how the change in stewardship in the government and country helped me connect to the K.

All-in-all, I enjoyed this story and plan to read these authors again. Roberto Scarlato was an decent narrator--just slow reader. I have found that this book is creative gut-wrenching storytelling. I am not a professional reviewer. I purchased this book with my own money. I am just trying to write a good review to help others decide if they should purchase this book.

The characters are super inaccessible. This isn't a slow burn it's not a burn at all. All the sex is called mind blowing but honestly it feels forced and emotionally void.
After a while it just gets repetitive. I have up when the main character gave up her sense of self. Ugh.

I adored the way Mia was so naïve and vulnerable and Korum, an amazingly handsome man who happens to be both domineering and possessive becomes fixated on Mia. Korum can't see how his high handed life makes it harder for Mia to fall for him like he is for her.

Shell of a human

Maybe it changes at some point, but the main character is just too sad and weak. Just a shell of a person and I can't listen anymore.

In chapter 7 and still not sure what the story is about other than a hot alien deflowering a college student. Not really what I’m looking for in a story.
Narrator isn’t working for me either.

all 3 all good smooth flowing listen

Korum was a K. Not just K, but a very smart, advanced, ambitious K. Mia was just a simple college student on the planet the K planted seeds for millions of years ago.

Robert Scarlato does this series justice. He allows the mind to go on a beautiful adventurous journey.

Anna Zaires have a very vivid imagination with a beautiful way with words to weave a story well worth enjoying.

It was really captivating! I read the 3 books in a row and I loved it!

Loved every minute of the this story, so much that I have listened to it several time.

Anna Zaires is the best writer for romance.

I was put out at first because I was searching for interracial romance novels and didn’t feel, at first, that I could relate to the characters. I was pleasantly surprised and then totally obsessed with Krinar and it’s hot, dominant Korum. The fact that my nickname is Mia helped a bit more. It was the best romance novel I have ever read/listened to. The narrator Roberto Scarloto was the best narrator I’ve heard. I am very pleased with how down to earth and kind the writer and narrator are when I reached out to compliment. It may seem funny but there is a time in life where there is a before one incident and an after, how feelings about things change. There is a before this novel and the obsession afterward. I can’t imagine my life without this book. I’m even considering writing a fanfiction inserting my mixed race heritage and experiences in it.

From a reader's Reader: Simply Brilliant!! So timely, breathtaking in scope. Rarely do you see such depth and thought in fiction.