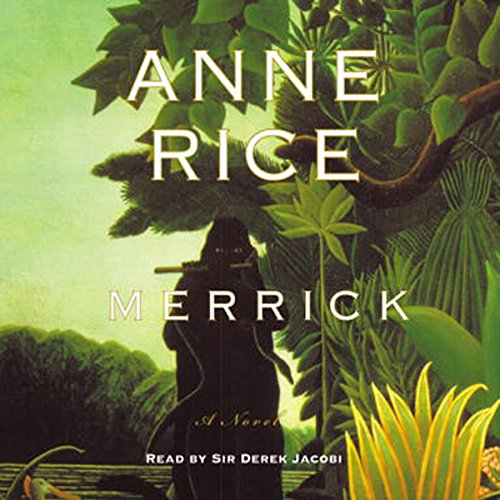 At the center is the beautiful, unconquerable witch, Merrick. She is a descendant of the gens de colors libres, a cast derived from the black mistresses of white men, a society of New Orleans octoroons and quadroons, steeped in the lore and ceremony of voodoo, who reign in the shadowy world where the African and the French - the white and the dark - intermingle. Her ancestors are the Great Mayfair Witches, of whom she knows nothing - and from whom she inherits the power and magical knowledge of a Circe.

Into this exotic New Orleans realm comes David Talbot, hero, storyteller, adventurer, almost mortal vampire, visitor from another dark realm. It is he who recounts Merrick's haunting tale - a tale that takes us from the New Orleans of the past and present to the jungles of Guatemala, from the Mayan ruins of a century ago to ancient civilizations not yet explored.

Anne Rice's richly told novel weaves an irresistible story of two worlds: the witches' world and the vampires' world, where magical powers and otherworldly fascinations are locked together in a dance of seduction, death, and rebirth.

For a full selection of Anne Rice programs available at audible.com and to hear the author answering fan mail, visit the Anne Rice store.

"Rice offers a haunting look at the separate but equally intriguing worlds of witches and vampires..." ( Publishers Weekly)

ann Rice is an amazing writer and this book is amazing. However, I had a huge problem with the narrator in this story. he was muffled and quiet and not clear throughout the story. there was times that I has to hit the rewind button. I do not think it was his I just think it was the quality of the recording. the producer of this book should have known this and fixed it before this ever went to production!!

I honestly tried over a dozen times to get through this audio book but I eventually had to tap out! The narrator made this the most painful story to listen to. I deleted it without first fishing the story and just mined on to the next book😣

Enchanting but not a Vampire Chronicle

Did Graeme Malcolm do a good job differentiating all the characters? How?

I enjoyed his overall narration and he was a perfect match for the voice of david but i did not like how he voiced other key characters in the story.

Was Merrick worth the listening time?

This book was a great read and is definitely one of Anne Rice's better novels.

If you came to this book hoping for the next exciting installment of the vampire chronicle series you might be very disappointed. The book is a good read but aside from the fact the book is narrated by one of our beloved vampires there is maybe a third of the content of the book that actually focuses on them. This book clearly fulfilled a desire of the authors to do a cross over of her two series the vampire chronicles and the mayfairer witches but doesn't really focus on either one.

Difficult to listen to....

Male narrators cannot do female characters no matter how hard they try, it diminishes the entire performance. I had to push myself to finish.

I read the reviews which warned of a sub-par audio recording but decided to give the book a try anyway. Well, the reviews are correct..... the narrator himself is good but quality of the audio recording is TERRIBLE! The sound is so muffled, it's as if the narrator recorded this book with this hand over the microphone. I typically listen to my audiobooks in the car during my commute to work but it was almost impossible to hear when combined with road noise. I found that the only way I could actually hear this book is by listening in a very quiet environment with ear buds.

Aside from the recording issues, the story is just "ok" at best. I was disappointed in the lack of depth or substance to the novel. It wasn't the worst thing I've ever read/listened to, but it certainly wasn't on par with Anne Rice's other work.

I was so excited to begin this book because it is where the Mayfair witch series intersects with the vampire series. I have to admit that I was very disappointed initially for a couple of reasons: the voice quality of the actor was very poor - very low with heavy bass. Even when the volume was turned all the way up it was very difficult to hear him and understand his muffled voice. I also found it difficult to get up to speed with what was happening in the first few chapters because this book is really a continuation of the vampire series and starts to introduce the Mayfair witches.

however , If you can make it to chapter 5, I assure you that you will very much enjoy the story. It’s very interesting in that it takes you on a wonderful journey into the central American jungles and the more culturally diverse side of the Mayfair family. Now that I am more up to speed with who’s who in the vampire series, I am very excited to start the next book. Stick with it because he will be glad that you did!

What was most disappointing about Anne Rice’s story?

This book was basically a series of flashbacks about characters no one cares about. We are told Merrick is this fantastic witch and she doesn't do ANYTHING to substantiate this claim other than some parlor tricks and mind reading - which any fledgling can do. I do not understand why the premise of the book, Louis wanting to speak to Claudia's ghost, was abandoned for 90% of the book so we could hear flashbacks about Merrick's dead relatives.

The voice of Aaron Lightner was all wrong. Lots of static in the recording. Great story by Anne Rice as always, but the actors need to research the characters a bit better.

No, because it seems as though she was picking previous characters and re-telling parts of their stories. Too tame for Anne Rice.

Would you ever listen to anything by Anne Rice again?

Do you think Merrick needs a follow-up book? Why or why not?

Definitely not. She does not play a substantial role. She is mostly listening.

A moving a tale as only Anne Rice can tell. The story line flows flawlessly

Graeme Malcolm, an exceptional reading, pleasant to listen too.
Vocal tones and inflections done with prefection.