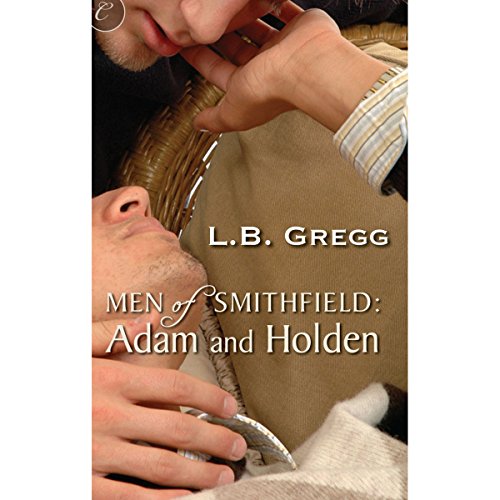 Men of Smithfield: Adam and Holden

Men of Smithfield: Adam and Holden

Holden Worthington's globetrotting days are over. Once the host of a popular adventure show, he hasn't ventured past his own front door in more than a year. Then the arrival of a sexy new gardener sparks something Holden hasn't felt in a very long time - an interest in the world outside his window.

Holden tries to resist the attraction. But painfully shy yet definitely interested Adam Morgan has Holden longing to conquer his debilitating anxiety and live again. After a grisly discovery on the grounds of the estate, the town of Smithfield turns a suspicious eye on the reclusive Holden - and the two men must trust in each other to bring the truth out in the open.

The interpretation of Holden as Paul Lynde. I can understand why the narrator went this way, because the book really has great snarky dialogue. But as much as I like Paul Lynde, it is NOT sexy to hear the romance part of the book with his voice. It is really annoying after a while.

It wasn't really that interesting. The story and romance is really pretty lame. The best thing about the book is the comedy, it is really funny. I would suggest listening to it as a funny read with a little romance.

Diversified. He did a great job with the different charaters, but I just didn't like Holden's.

Do you think Men of Smithfield: Adam and Holden needs a follow-up book? Why or why not?

No, just let them be happy.

I like L.B. Gregg. I think her stories are funny and clever and sweet, but also have some good steamy scenes. The worst part about this BY FAR was the narrator. I've hard him narrate Gregg's other stories, so it's not that he can't narrate, but the choice that he made for Holden had me cringing the entire time! As others have said, it was very Paul Lynde-esque. Which is horribly unsexy. And Holden is fit and strong and hot!!!! It absolutely took away from an otherwise entertaining story.

As I said above, his choice of voice for Holden was the absolute worst choice I've ever heard from a narrator. If I didn't like Gregg so much, I wouldn't have made it through the book. Absolutely awful. It needs to be redone.

If you could sum up Men of Smithfield: Adam and Holden in three words, what would they be?

What other book might you compare Men of Smithfield: Adam and Holden to and why?

Don't know that I can think of another book that is similar off the top of my head.

What aspect of Shannon Gunn’s performance would you have changed?

His interpretation of Holden is a bit 'Paul Lyndeish' and sometimes annoying. I was wondering if the character was supposed to be voiced that way.

Most of the moments involving Adam's insight. I love how sensitive and open he is. When he declared his love for Holden, I melted.

I hope there are more in this series and I would love to have Shannon narrate again. No more voices like Holden's though.

I really enjoyed this book, particularly in audio format. I have actually enjoyed all of the Men of Smithfield stories. L. B Gregg provides a little mystery and a love conquers all mojo that appeals to my extremely unrealistic romantic side. With this story the two principle characters are Holden--a 40-year-old former adventurer, now agoraphobic and Adam--a 24-year-old young man who has to endure and overcome some earlier trauma. Within the midst of the romance is a mystery that left me guessing towards the end of the story. All in all, a good journey. Now as far as the narrator, Shannon Gunn has done all four books and I admire his vocal ability for differentiating our protagonists, but the voice for Holden really just tickled me to the point of no return. I am sure that some will not get my reference, but as I listened to Holden's story I kept envisioning Paul Lynn. Some of the inflictions provided by Gunn were spot on to the late and great Lynn. Then of course, when Holden spouted off on several occasions of being 'the man', my mental image and the vocal inflictions had me rolling. I am not sure if that was the intent of Gregg, but it certainly added so much more to the character of Holden and actually served as a measure that endeared me to Holden. I actually had to have my bff listen to the book to see if I was crazy and she came up with the same conclusion that I did regarding the character of Holden. But I digress, I thoroughly enjoyed this story and would recommend and if you want to determine my Lynn reference, just remember Uncle Author from Bewitched or from reruns of Hollywood Squares and the center square.

loved it. laughed so hard. think these were my favorite characters so far in series.

All i could hear was Roger from American Dad

What did you love best about Men of Smithfield: Adam and Holden?

The story was sweet and the characters were delightfully broken. I got the feeling that Adam was maybe slightly autistic but still a strong and functioning person.

What was one of the most memorable moments of Men of Smithfield: Adam and Holden?

two little girls and a fat dog walking down the street.

All i could imagine in the place of Holden was a short grey alien with a giant head. I believe that seth macfarlane modeled him on paul lynde which is another name being thrown around the reviews! it was distracting made the story seem slightly ridiculous!

i imagined roger the alien from American Dad having gay sex. that was pretty funny :)

This is the first book I have listened with Shannon Gunn as a narrator. I will listen to any book he narrates because he is that awesome. He gives the needed pauses, inflection and makes the humor in this book sing. I could go on forever about how great of a job he did with this story and the characters. The story and writing were wonderful because of the narration. I laughed a lot with this book. Laugh out loud funny.

What made the experience of listening to Men of Smithfield: Adam and Holden the most enjoyable?

The narrator did an excellent job of telling the story.

I would say it was the discovery of the body, and it was how the town of Smithville reacting with all their gossip on who dun it.

Who was the most memorable character of Men of Smithfield: Adam and Holden and why?

Holden, of course, since it's his POV I was listening too.

The only criticism is that the main character’s voice sounds like Paul Lynde. If you can get past that, this is a fun listen.

I enjoyed the story. However, the narrators choice of voice for the main character made me dislike the character. The voice was that of a nasally, stuck-up, devoid of emotion or empathy, nails on a chalk board, self absorbed person. It made me unable to relate to the main character.

Review on ´Men of Smithfield - Adam and Holden´

Once Holden had been a globetrotting TV personality but much drama in his personal life has made him an agoraphobic recluse now being scared of all the fresh air and wide space behind the front door of his big mansion. Spring time brings in shy and socially awkward gardener Adam, who discovers an unknown dead man in Holden´s neglected garden. Of course that feeds the suspicions of the gossiping Smithfielders and makes Holden´s quiet life exciting, as do this feelings for Adam he has.

Although L B Gregg has written another entertaining story with witty dialoges and even a murder case, this one is my least favourite of all the „Men of Smithfield“ episodes.The main reason is Holden, who is more like a whining, self-centered, randy old devil trying to seduce his virgin employee while the homicid investigations in his backyard are ongoing. I tried really had but could not warm up to him. The mystery had too many side characters being somehow involeved or not and the missing emotinal connection between lusting Holden and sweet,young Adam, this time it did not work for me.

Despite all those flaws I am always spending an enjoyable time and feeling like one of those gossiping townspeople following the scandals at the Worthington Mansion thanks to Shannon Gunn and his great voice talent. He not only portrays Holden and his dirty inner monologes perfectly, the misgiving housekeeper, the holier-than-thou neighbor, the preppy banker, the drunken brother, the overeager sister-in-law, they all get a matching voice from him. It is so much fun listening to his fluid and vivid narration of this story!