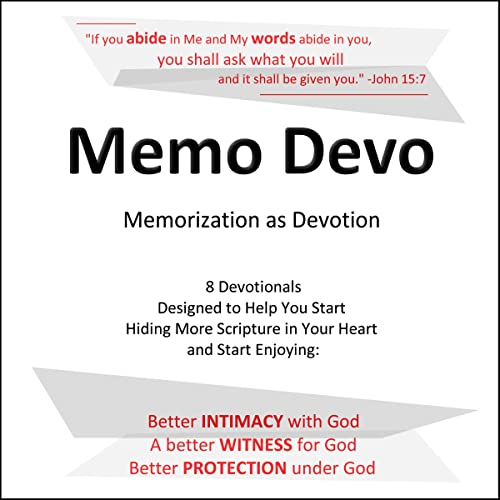 You can do this!

Memorization through story and song was the only way folks like us had of studying and pondering God's word at all for almost half of our recorded existence before Moses ever began writing it all down. And for most folks, that tradition continued on millennia after that, before literacy became as common as it is now. So yes, it is in your DNA. And yes, you are as "gifted" as me or anybody else to do it. Really!

But whether or not you believe any of that, one thing I do know is that I myself have experienced unprecedented power in my own walk with the Lord since beginning to treat long-passage Scripture memorization as devotion. And now, I want you to have that same experience.

As featured on Bible Gateway and in The Old Schoolhouse Magazine, The Memo Devo Devotional series is a practical aid. It is designed to give you a real starting place for hiding more Scriptures in your heart and also to pass along a few helpful memorization tips that I use in my own dramatizations.

I challenge anyone whose current relationship with Jesus is not where they'd like it to be (as mine was) to try this. If you don't agree that it has real supernatural power to bring you closer to Jesus than ever before, make your witness for him better than ever before, and bring you better protection under his wings than ever before—then hey, no harm no foul.

But what if it does? What if there really is unprecedented supernatural power just sitting there on your bookshelf right now waiting for you to tap it? And if you take Jesus at his word (John 15:7-8 and 17:17), that power can literally transform your life, even if you've been a Christian for decades.