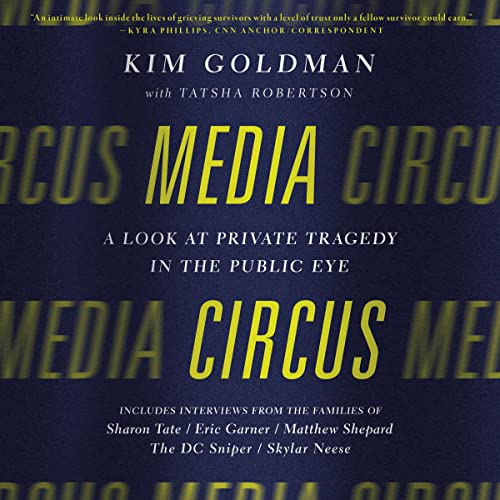 Imagine losing a loved one in the public eye.

A media frenzy ensues and spreads your family name through the news. Reporters ambush you, and across the country, strangers gossip about your personal loss.

Welcome to the circus.

No one understands better than Kim Goldman the complex emotions of individuals suffering a personal tragedy under the relentless gaze of the media. During the famed O.J. Simpson trial, Kim, whose brother, Ron Goldman, was brutally murdered, became the public poster child for victims suffering in the public eye.

In Media Circus, Goldman, now a dedicated victims' advocate who works with families across the country, presents the first collective look at these ordinary, grieving victims - forced to manage their very private trauma and despair in a very public way.

Through candid interviews and detailed, original reporting, Media Circus delivers riveting, humanizing, and inspiring stories from the victims and survivors of violent crimes who found themselves the focus of national media attention. Its heartfelt narratives showcase the unique challenges of coping with and healing from grief when the whole world is watching.

In this audiobook, the families of other victims tell their stories, including:

Media Circus goes beyond the names and faces to show the real victims behind the stories.

“Kim takes us to a place the camera rarely has an opportunity to go. An intimate look inside the lives of grieving survivors with a level of trust only a fellow survivor could earn. At times of tragedy, mass media tends to skim the surface.” —Kyra Phillips, CNN anchor/correspondent

“Behind every headline lies a personal story that is often forgotten or never told. Kim Goldman's Media Circus renders an eye-opening glance into the reality of high-profile victims’ personal loss and struggle for healing.” —Debra Tate, victim advocate and author of Sharon Tate: Recollection

“Goldman makes very important comparisons of cases from the past 30 years and shows how social media and media in general has impacted the victims while living under the public microscope.” —Katie Beers, victims’ rights advocate and author of Buried Memories