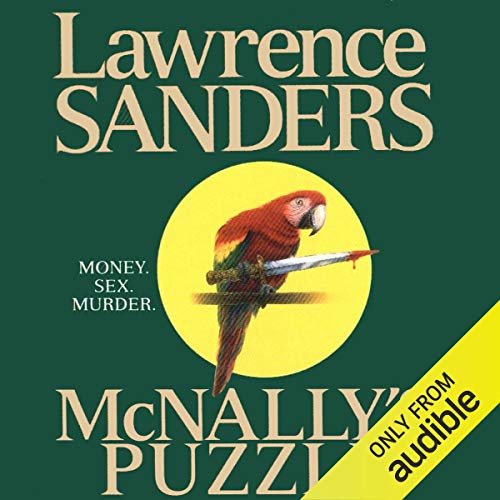 In the sixth book in Lawrence Sanders's best-selling Archy McNally series, a twisting tale of sizzling family secrets proves that murder isn't just for the birds

Hiram Gottschalk, owner of the Palm Beach shop Parrots Unlimited, fears for his life. First, he finds a photo of himself and his deceased wife slashed to ribbons; then, a Mass card with his name on it is taped inside of his closet door; now, someone has wrung the neck of his beloved pet bird. In desperation, he turns to McNally & Son for a private investigation. McNally meets with Gottschalk, along with his client's cursing parrot. McNally wisely ignores the bird's command to go to hell, but he can't ignore the fallout when his client is stabbed in his sleep and Gottschalk's unstable son, Peter, becomes the prime suspect. When more victims turn up, McNally has to puzzle out the motives of a murderer who has just killed two more birds with one stone...and is now targeting the dapper detective.

I love this series. I have read each book in this series numerous times and enjoy rereading and rehearing them again.

Unsurprisingly, Audible stopped offering McNally books with the next - the seventh in this series.

Not to worry... The 6th in this epic is my last. Archie McNally was a traveling companion of mine as, twice a year I drove a couple thousand miles round trip to and from a vacation home. On each ride, I'd looked forward to having Victor Bevine tell me another of Lawrence Sanders McNally stories. Frankly, they helped keep me awake. You know, not so much adventure or cognitive discipline to distract from Interstate driving, but enough to tickle that part of my mind that needed support.

I noticed that 'McNally's Trial' - the fifth in this series was growing repetitive - but another meeting with Archie seemed like a tradition, so 'McNally's Puzzle' got packed with the road stuff. Pity. Sander's seems to have lost his imagination and Victor Bevine's reading brought nothing new to the adventure. So... sort of sadly, there won't be any more Archie on our future trips up and down America's east coast.

Sanders is out of steam, he phoned this one in. In fact, I'm surprised there was another McNally that followed it.