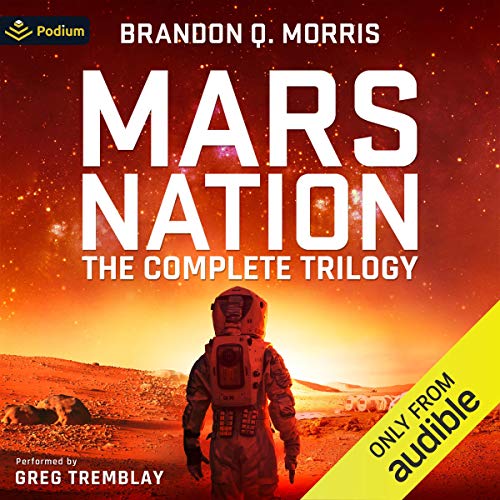 NASA finally made it. The very first human has just set foot on the surface of our neighbor planet. This is the start of a long research expedition that sent four scientists into space. But the four astronauts of the NASA crew are not the only ones with this destination. The privately financed "Mars for Everyone" initiative has also targeted the Red Planet. Twenty men and women have been selected to live there and establish the first extraterrestrial settlement.

No one anticipates the impending catastrophe that threatens their very existence, not to mention the daily hurdles that an extended stay on an alien planet sets before them. On Mars, a struggle begins for limited resources, human cooperation, and just plain survival.

A woman presumed dead fights her way through the hostile deserts of Mars. With her help, the NASA astronauts orphaned on the Red Planet hope to be able to solve their very worst problem. But their hopes are shattered when an unexpected menace arises and threatens to destroy everything the remnant of humanity has built on the planet. They need a miracle - or a ghost from the past whose true intentions are unknown.

Does the secret of Mars lurk beneath the surface of its south pole? A lone astronaut searches for clues about the earlier inhabitants of the Red Planet. Meanwhile, Rick Summers, having assumed the office of Mars City's Administrator by deceit and manipulation, tries to unify the people on Mars with the weapons under his control. Then, Summers stumbles upon so powerful an evil that even he has no means to overcome it.

Based on the rating you should pass on by right? Hold your Mars rover there. This may not be Andy Weir but it’s a good story. The characters are well written and the story is intriguing if a little predictable. Greg Tremblay does a fantastic job narrating which really helps the story through a few parts where you have to suspend disbelief. I think the content is well worth a credit.

Narration was decent, that's the only positive thing I have to say.

Has moments of greatness, but pretty blah.

I’m an avid audible listener and listen to a ton of sci fi. These books have some great ideas behind them but the path to the end kinda sucks. I felt myself thinking about other things and having to rewind the books a lot because I was tuning them out. At other times I was really intrigued by what was going on. It was worth the listen, but I’m definitely returning it and getting something else.

If you like near-future hard sci-fi then you'll definitely enjoy it, but I felt like the ending was a bit too rushed with too little time spent resolving the overarching plots to feel satisfied.

That said, I would definitely read a 4th book if one were ever to be released.

Overall a good mars series. The various competing factions make an interesting dynamic. No surprise someone tries to position themselves as the defacto king of Mars.

Good value for the credit

The story is a little inconsistent and there's some glaring science / engineering errors. But over all it's a good story and a good performance.