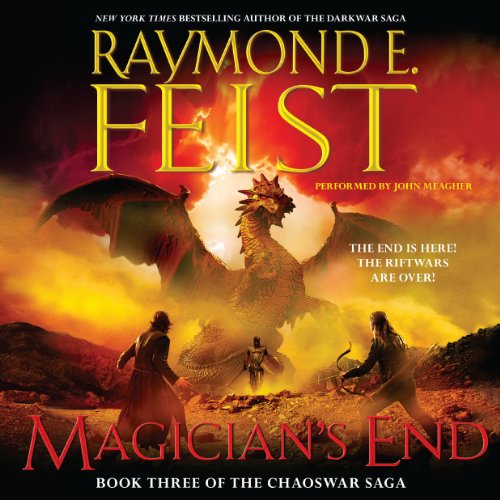 As it began, so shall it end - in magic, mystery, and majesty... Magician's End

Thirty years ago, Raymond E. Feist wrote his first novel, Magician, a story about an orphan boy named Pug who is thrust by a war into captivity in an alien world, only to rise from slavery to become a Master Magician. Magician introduced readers to Midkemia and the Riftwars, an epic series of battles between Good and Evil that have scarred this remarkable realm for generations. Now, after 29 books (authored and coauthored), Feist delivers the crowning achievement of his renowned best-selling career: Magician's End, the final chapter of the Chaoswar Saga and the climax of his extraordinary Riftwar Cycle.

An uneasy quiet has settled upon Midkemia in the wake of a surprise invasion. But the land is far from peaceful. Leaderless, the Kingdom is on the brink of anarchy and civil war, unless Hal conDoin, Duke of Crydee, and his brothers can rally their allies to crown a new king. They must move quickly, for war has left the land vulnerable to an agency of horrific destruction not of this world. No one is safe, not even the Star Elves whose city deep in the Grey Tower Mountains has come under attack by an ancient darkness that seeks to extinguish every living thing in Midkemia.

Yet the bravery of determined warriors - brothers in blood and arms - is not enough to ensure the Kingdom's preservation without the magic of the Master Sorcerer Pug. A powerful spell has trapped him, his son Magnus, and two unlikely allies in an unfamiliar realm, and they must find their separate ways home - a journey of memory and discovery that will illuminate the truth of the destiny that awaits them. But to save Midkemia - and everything he has fought for and all he cherishes - Pug will have to pay the ultimate price.

A breathtaking tale of elves and men, love and hate, ambition and sacrifice, intrigue and brotherhood, war and peace, Magician's End brilliantly captures the essence of life and the eternal struggle for survival. It is an extraordinary ending to the magnificent saga that has made award-winning Raymond E. Feist a legend.

loved it! wish the rest of the books were on audib

great book. I wish the rest of the books would be on audible! lets hope they get on that

Not exactly a review, but

It's With Equal parts sorrow and happiness I finished the Magician's End. I loved how it all ended, but I am truly sorry to say good bye to all the characters I have followed for so many years. All left to say is; Good job, Mr Feist, good job!

Having started off with the series when I was 16, it was a good finish. The storyline is great, sadly while the narrator is good he wasn't matched for the characters I thought.

I've always loved the Magician books. This is no exception. Unfortunately they chose the wrong narrator. This book needed a strong, older reader or better yet a male and female team like gghe

Great end to a wonderful saga

John Meagher does an acceptable reading for this final series, though I would have preferred Peter Joyce for consistency.

seemed like the narrator was just reading the words not telling the story. made it very boring. I could not even make it through the first chapter and decided to just buy the book and read it myself.

I won't put any spoilers in here, but this epic story brings a long story to an end in a way that only a master storyteller could. it brings sadness that this will be the last book.

A good ending to a beautiful story of majesty, magic and power stretching three decades

this series was one of the first fantasy book i read serious growing up. a gateway to an interesting genre.

Choose the other version. Narration is bad in this

What would have made Magician's End better?

If the cart would have allowed me to purchase the other version of this.

Great end to a very long adventure. Loved the book but was disappointed with the narrator for these final novels. I found that a lot of my irritation was alleviated when I slowed him down to X .9 and I would only remember when the end of chapters took a bit too long.