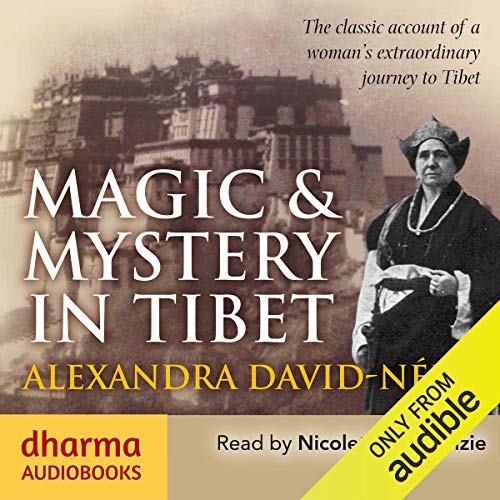 This classic memoir by the remarkable French explorer and Buddhist Alexandra David-Néel is the one of the greatest Buddhist travelogues of the 20th century. She was the first European woman to meet the Dalai Lama (in the 1920s) and in 1924 became the first to enter the forbidden Tibetan capital, Lhasa.

She had already spent a decade travelling through China and Sikkim, India; lived and meditated in a cave on the Tibetan border; and everywhere learned about Buddhism from hermits, mystics and bandits. She recalled, 'In the course of my travels, I witnessed unusual events, met strange people and brushed the threshold of a particular spirituality'.

In Magic and Mystery in Tibet, Mme David-Néel recorded the mysterious, magical world she encountered. Among the extraordinary practices she described are the Tibetan mystics who could live naked in temperatures below freezing (tumo), monks who covered incredible distances on foot in strange leaps (lung-gom) and others who could seemingly defy gravity.

These practices became part of the legends of Tibetan Buddhism, as it became better known in the West - but they were first reported, from firsthand experience, by Mme David-Néel. Her writings proved a great influence on figures such as Jack Kerouac, Allen Ginsberg and Alan Watts. What makes this audiobook a classic is that she was not just an observer or a travel writer but a meditator and practitioner, respected by the lamas and monks she met. Her descriptions of Tibetan Buddhism, though dating from a century ago, ring true now, even with our greater contemporary awareness and understanding.

Despite her decades of life travelling, often in great hardship, across the Far East and Central Asia, she lived until the age of 101, dying in her home country of France.

I'm astounded at the adventures of Alexandra and forever thankful for her diligence in recording these adventures and observations so beautifully.

excellent book and the best narration I have heard

Where does Magic & Mystery in Tibet rank among all the audiobooks you’ve listened to so far?

This is my favorite audio book. The narrator sounds exactly like I imagine Mrs. David-Neel herself sounds.

love this story. want more of it..

great way to experience tibet, and its magical ways of the local culture, it had a great fare of magical superstitions, and what may have been real..

The right voice for the story

I think this is as close as you can get to the mystic world of Tibet. I could imagine David Alexandra Neale would have a voice like that of the reader. Strong, goal minded, not too female.

Especially great read for Western women practicing Tibetan Buddhism, but an amazing adventure story for anyone.

Surprisingly, not much dharma here.

Although Alexandra David-Neel was a remarkably independent and adventurous woman for her times, I found this book to be a dry account of her travels and studies, lacking inspiration. Most of her teachers were more disposed towards the Bon traditions of magic and it's only towards to end that she shares some of the principles of dharma (Buddha's teachings). If you want a travel account from one who explored the Tibet terrain and Tibetan Buddhism with the eye of an artist and the heart of a spiritual pilgrim before the Chinese invasion I recommend "The Way of the White Clouds", by Lama Govinda.

Rather than the magical memoir I thought it would be.

I am already on to my next listen. I won't let one bad apple ruin the site for me and I don't have to especially not with the great listen guarantee.

The narrator didn't add to or retract from this particular book.

They can't all be wonderful.