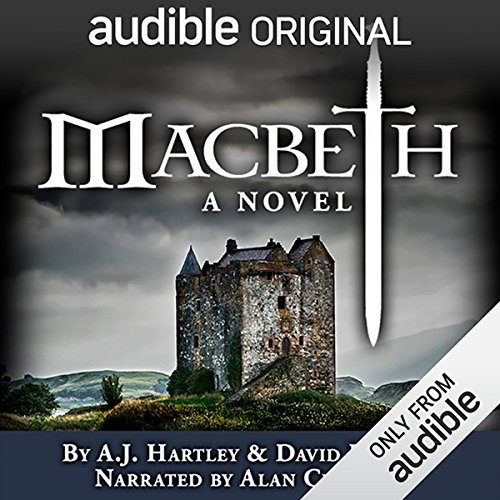 Macbeth: A Novel brings the intricacy and grit of the historical thriller to Shakespeare’s tale of political intrigue, treachery, and murder. In this full-length novel written exclusively for audio, authors A. J. Hartley and David Hewson rethink literature’s most infamous married couple, grounding them in a medieval Scotland whose military and political upheavals are as stark and dramatic as the landscape on which they are played.

Macbeth is a war hero and a patriot, doing everything in his power to hold together Duncan’s crumbling kingdom, which is beset by sedition from within and with threats from overseas. But when Duncan, contrary to ancient Scottish tradition, turns to building a family dynasty instead of rewarding those who have borne the brunt of the fighting, Macbeth and his powerful wife, Skena, make plans of their own, plans designed to hold both the nation and their strained relationship together. Sinister figures who claim supernatural knowledge spur them on, but the terrible outcome is as much about accident and failure as it is malevolence. Soon Macbeth and his wife find themselves preeminent in all the land, but struggling to hold themselves and their country together as former friends turn into bitter and deadly enemies.

This is Macbeth as you have not heard it before: fresh, edgy, and vital. It is a story of valor in battle, whispering in shadows, witchcraft in the hollows of an ancient landscape, and the desperate struggle of flawed people to do what they think is right.

My first Shakespeare (but not my last)

I came to this novel differently than many people probably have - I have never read or watched Shakespeare's plays. I have only the slightest general cultural knowledge of things like MacBeth and Romeo & Juliet, etc. My hope was that this novel would lead me to take on Shakespeare - and it has! The book was dark, of course, and a tragedy (I think even I knew that much) but it also led me through the path of MacBeth and Lady MacBeth from idealistic youth to their tortured endings in an understandable way. The narrator was AMAZING as others have stated, and really made each character come to life for me! I look forward to reading the actual play MacBeth (probably the Spark Notes "no fear Shakespeare version, I'm a wimp) to see the differences and similarities. So really, any novel that leads a regular working-class person to want to read Shakespeare has to be a good one, right?

Not Your Mother's Shakespeare (but still enjoyable

There seems to be a run of Shakespearean adaptations in fiction of late. In addition to this one, I recently reviewed 'Iago' by David Snodden, and 'I, Iag'o by Nicole Galland. 'Macbeth: A Novel' is the collaborative creation of British crime writer A. J. Hartley and David Hewson, a professor of Shakespeare who writes thrillers in his spare time. Although I'm not a reader of either genre, I am a Shakespearean and know the play very well. I wasn't quite sure what to expect of 'Macbeth: A Novel'; after all, no one can improve upon Shakespeare, and many of the adaptations I've read are either laughable or maddening. So I was pleasantly surprised and even enjoyed this one--perhaps particularly because I listened to the audiobook, wonderfully read by Alan Cumming, who for once was free to revel in his glorious Scottish accent.

Hewson and Hartley stick pretty closely to the bare bones of the plot that we are all familiar with, but they take free reign in filling in the "offstage" details. For example, the first third of the book puts readers right in the middle of the civil rebellion and Norse invasion that have been going on as the play opens. We see Macbeth and Banquo fighting in the field; we see Macbeth's capture of the rebel Macdonwald, the blow-by-blow fight to his bloody death preceded by a verbal exchange that prefigures Macbeth's own treacherous acts. Shakespeare, on the contrary, perfunctorily has messengers deliver the news of Macbeth's victories to King Duncan. Back on the home front, the authors give Lady Macbeth a name of her own (Skena). They provide an answer to the oft-asked question, "Where are Lady Macbeth's children?" And they give us plenty of chat between the couple that helps us to understand the powerful forces between them. Interior flashbacks also flesh out the Macbeths' individual biographies, and frequently we're made privy as to what is going on in their minds. Hewson and Hartley imaginatively--but not fantastically--fill in the blanks: why exactly Macbeth turns on Banquo, what happens to Fleance after his father's murder, who the weird sisters are and how they came to be witches, what daily life is like at Macduff's castle before the assassins arrive, and more.

I won't be recommending this book as a classic, or even a must-read. The style is probably better suited to crime novels and thriller: a bit too 'colorful' and 'overwrought,' shall we say, for my taste. Yet it fits just fine with the story of Macbeth. This was a fun piece to breeze through at the end of the semester, which is always a stressful time for me. If the idea of a thriller-crime novel version of Macbeth, read in a charming and authentic Scottish accent by a fine actor, appeals to you, I say, go for it!

This is a first review for me;I am not prone to doing such. I cannot praise this effort with sufficient words. As with others, once I began listening, i could not unplug my earbuds. Alan Cummings was spectacular as the narrator; a choice spot on. The writing of the novel, although with some liberties and condensing of history, was superb. I cannot thank the writers enough for taking the risk to do Macbeth in novel form. Congratulations to Audible for making the listening of the novel an exciting adventure.

Though I am a stickler for history, and - as another reviewer mentioned - I would have liked this story to include Macbeth's "good years" as a ruler (and I don't think it would have hurt the narrative at all), I loved this audiobook. The narrator was fantastic, I loved the character development (Skena and Macbeth), and the new take on the witches. As for the take on Duncan, it may be unflattering and unfair, but so was the original play. Listened for most of an 8-hour drive...and was upset to finally be at my destination before the story was finished!

This book is hard to put down.

This Audible offering takes the familiar story and turns it into a fully realized epic, placed in historical and political context. The writing is outstanding, so that I could envision the very landscape and scenery throughout all of the story locations. It is both an action story and a political and psychological thriller. The characters are fleshed out with complexity that prevents black and white "good guys vs bad guys" caracature. By filling in details of the political and cultural scene of 11th century Scotland, the authors allow us to have a better understanding of the motivations of all the characters, particularly why Macbeth decides to kill the king in the first place - going beyond the motivation of raw ambition. Lady Macbeth is much more complex than the ambitious behind-the-scenes manipulator that we are used to - and much more sympathetic. The presentation of the 3 witches is particularly facinating - no "double, double toil and trouble" - but very specific descriptions of their different personalities and their role in setting the action in motion.

I listened to the entire book in one day - unable to put it down. This is a wonderful piece of drama that should not be missed. I will look for more original titles from Audible if this is the standard of excellence that can be expected.

A briliiant novel, brilliantly performed, Macbeth: A Novel, owes as much to Shakespeare's Julius Caesar as it does to his Scottish Play. Macbeth is presented as a Scottish Brutus, determined to preserve the Scottish oligarchy by which the Scottish king is chosen by the acclimation of the nobles, rather than by heredity.

Far from seizing the crown for himself, Macbeth is presented as an idealist and a patriot with an over active conscience leading him to excess, paranoia and insanity. Lady Macbeth is shown as a pragmatist with a heart that turns sour.

Combining the Shakespearian influences in this way something new and true is created. All involved deserve praise and recognition both for this masterwork and for what it might potentially due to further establish the credibility of the audiobook genre.

I never believed that any author would have the nerve to rewrite Shakespeare but Hartley and Hewson have dispelled that belief and produced an amazing, dramatic novel based on "Macbeth."
Yes, "Macbeth" is a novel and subject to the authors' inventions and imagination but it takes the play and develops it, giving us a fully rounded story incorporating so much of the actual social and political situation in Scotland during the 11th century.
The ruggedness of the Scottish landscape and the cruel winter climate are vividly portrayed as are the battle scenes which enable us to catch a glimpse of the harshness of life and horrific warfare in Macbeth's Scotland.
Belief in witchcraft was commonplace and the authors fully develop this aspect portraying the witches in a fascinating new way. All the characters are so fleshed out that we come to a greater understanding of them as real human beings and even find ourselves empathising with them, especially Macbeth himself and his wife Skena.
In all Hartley and Hewson bring "Macbeth" to life by painting a vivid picture of the play in a most eloquent fashion.
The choice of Alan Cumming is a master stroke as through his inspired narration we are led to a greater understanding of the characters. He said that to him it felt that the original play had evolved from this novel. Praise indeed and so well merited!

More than an audiobook - a work of art

Having just returned from Scotland, I can also say that the atmosphere of the Scottish Highlands comes alive in this novel, as much a character as any of the people. Understanding the Scots, their fierce pride and love of the land, puts Macbeth and his wife into a setting which makes, to me, much more sense than the Shakespeare version. Sorry Will.

I encourage everyone to take advantage of this unique and beautiful book.