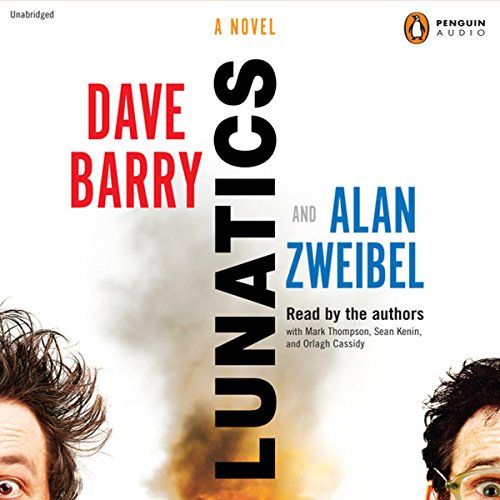 One of them is a best-selling, Pulitzer Prize-winning humorist. The other is a winner of the Thurber Prize for American Humor. Together, they form the League of Comic Justice, battling evildoers in the name of... Okay, we made that line up. What they do form is a writing team of pure comic genius, and they will have you laughing like idiots.

Philip Horkman is a happy man - the owner of a pet store called The Wine Shop, and on Sundays a referee for kids' soccer. Jeffrey Peckerman is the sole sane person in a world filled with goddamned jerks and morons, and he's having a really bad day. The two of them are about to collide in a swiftly escalating series of events that will send them running for their lives, pursued by the police, soldiers, terrorists, subversives, bears, and a man dressed as Chuck E. Cheese.

Where that all takes them you can't begin to guess, but the literary journey there is a masterpiece of inspiration and mayhem. But what else would you expect from the League of Comic Justice?

Lunatics,well, has a few moments.

Think of it as the worst moments of the Three Stooges, Moe constantly poking Curly and Larry in the eye. Hour after increasingly pianful hour.

It is easy to imagine how Barry & Zweibel wrote this book. Dave wrote something outrageous, Zweibel tries to top it. Each and every time the next chapter has to become ever more improbably humiliating to the characters. It isn't long until I wished the authors would do both in and move on to exploding whales.

Is it really funny that Phillip Horkman had to name his pet shop the Wine Shop because his in-laws, the Wines, funded it? How about an Islamic Terrorist dressed as Chuck E Cheese? Or a nun aboard a nudist cruise? Or the two idjits running against each other for President on the Democratic and Republic tickets?

Obviously, there's some folks who think this is funny. But if you're wanting to enjoy something that is LOL funny, go for Barry's Tricky Business, or any of Carl Hiaasen's works. In fact, begin with Hiaasen's first if you've not read it, and enjoy all 18. Weeks of great listening . . .

Funny Books Are Rare and This One Is Rare

What made the experience of listening to Lunatics the most enjoyable?

The story is outlandish and adeptly done with two separate narrations. Moreover, I think this is a stunt format, whereby the two authors separately wrote their parts. They also do the narration.

What's funny about this book? The story starts as a commonplace squabble between two polar opposite characters. Hilarity ensues when they unwittingly go about changing the world through no fault of their own.

Barry has written some funny novels. This is a good companion to his work.

Warning ! may cause uncontrollable laughter

If you could sum up Lunatics in three words, what would they be?

Peckerman! I know this guy

What does Dave Barry bring to the story that you wouldn’t experience if you just read the book?

Definitely the delivery! I have recommended this to several friends and told them to get the audio version! I am a voracious reader but this one MUST be heard,

If you could rename Lunatics, what would you call it?

Persons suffering from weak bladders should definitely exercise caution when listening to this audio! If you are listening while walking or riding public transportation you will definitely find people moving away from you...which may be a good thing..I'm just saying...

There were really only 2, which is the point of the story.The interplay is very funny

He "was" the character

I usually to not seek out "comedies", but this came as a recommendation from a friend as a good break from more "serious" content. I have to say that I laughed out loud more often than not. This is not high-brow humor, but the dialogue was hysterical. A pretty short book, which serves as a nice, fun interlude

At times very funny. The authors seemed to try to throw every joke at the wall to see which ones stuck. The plot was so over the top ludicrous that it seemed to make me want to cringe

Would you ever listen to anything by Dave Barry again?

alan..he kept trying to do the right thing in adversity! and kept on..and kept on!

Did Lunatics inspire you to do anything?

Too funny for words

The hilarity of the opposite personalities and the believability of the impossible scenarios they get into make this a laugh-out-loud story.

The narration by the authors really makes the book. Loved it.

Light reading, will make you laugh!

What did you love best about Lunatics?

The reader really made this funny. I don't know if it would haave been this funny from a book.

What was one of the most memorable moments of Lunatics?

Too many funny parts to pick one.

If you could take any character from Lunatics out to dinner, who would it be and why?

I laughed from the beginning to the end of this book.

It made me laugh out loud.

Have you listened to any of Dave Barry’s other performances before? How does this one compare?

This is Dave Barry's best in my opinion.

I laughed throughout the entire story - out loud!

Just buy it - it's hilarious.

Bad! Pass on this book. I like Dave Barry but, this book was silly. Not fun silly.