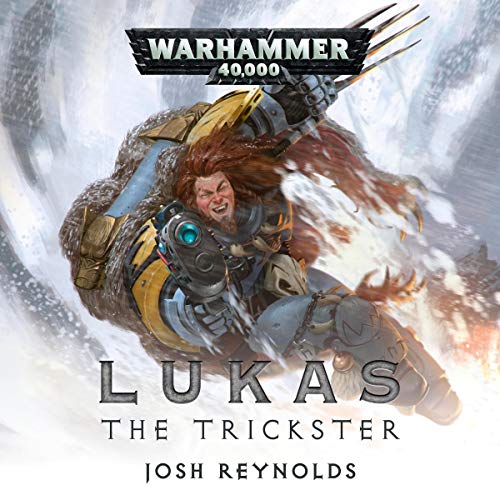 Among the Space Wolves there are as many sagas as there are warriors. Though none quite like that of Lukas the Trickster.

Renowned and reviled in equal measure, the Jackalwolf has ever stood apart from his brothers, passed from pack to pack by embittered Wolf Lords. But as a new enemy invades the icy reaches of Fenris at the height of the Helwinter, Lukas finds himself facing a foe who may rival even his legendary cunning - the drukhari corsair, Duke Sliscus.

In the battle between wolf and serpent, who will emerge triumphant, and who will lie on red snow?

Loved it, you really get into each side’s caracters. And it is nice to have non imperial/ chaos protagonist. Dark eldars is a good idea.
More like this book, please!

This has become my new all time favorite 40k novel. I can't highly recommend enough!

I hope for a sequel

A quality 40k title with an interesting character that moves at a steady clip. Never felt it drag on once through the whole experience.

Loved this book it tells such a great story of Lukus. I enjoyed every minute of this book

Can't wait for another book on Lukas.

Absolutely enjoyable read. Can't wait for another book on his new adventures. Love the characters and voice acting as well.

As much as this is an audio drama, it is also a comedy, Lukas' behavior is so funny and rash. My favorite part was when he was playing around with his new heart that was a grenade. Lukas was so fascinated and didn't seem to care if it may blow up while the Wolf Lord and Iron Priest were not so enthusiastic at Lukas' new curiosity. A great audio drama to listen to while painting Space Wolves.

great book! superb performance!! most relatable character in all of 40k portrayed to perfection!!

Well written, not crazy about the narrator

I got to chapter 7, and could not listen anymore. The narrator has a quality to his voice that is jerky and I find myself focusing on that instead of the storyline. Tried to return but for some reason this book was not eligible. I’m stuck with it

Great characters, the drucharii storyline is however too different in both spacing and storytelling from the space wolves for my liking; when they become intertwined are when the story shines however.

if you don't know you need to. wolves aren't always vicious. they are sometimes fun playful creatures. Not so unlike the trickster

A great story for anyone remotely fond the wolves!

A fun story from start to finish. You won't regret it if you like the Wolves to any degree. Lukas is now one of my favorite SM characters. I really hope he's included in stories to come.

Awesome story, worthy of the jackal-wolf!
Like always Josh Raynolds does an outstanding job!
I hope to hear more about Lukas in the future