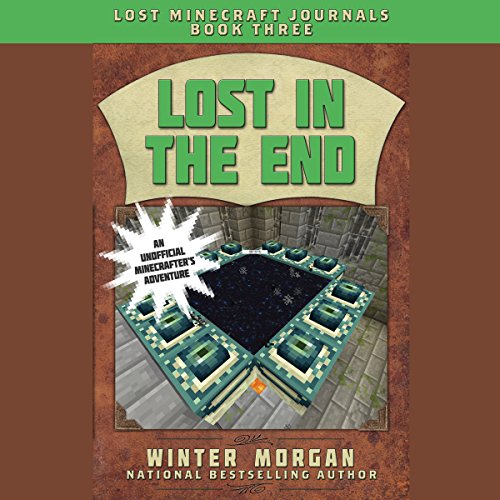 Lost in the End

Harriet, Jack, and Toby are treasure hunters, searching the Minecraft world for its most valuable hidden secrets. In an abandoned mineshaft, they discovered the first of three lost journals that once belonged to William, a legendary explorer who has gone missing. The journals have taken them on a daring adventure to a secret temple deep within a desert biome, then into the perilous depths of the Nether. Now the treasure hunters are facing their greatest challenge yet.

This time, they're certain they're close to finding William. They find themselves traveling deep into the ocean and atop the highest mountains, but they just can't find him anywhere. Is it possible the journals are a hoax? Is the explorer missing for good? In one last desperate attempt, the group ventures to the End. But will they survive this last-ditch effort, or have they finally gone too far?

This is the third book in the new Lost Minecraft Journals series. The chapters of each book alternate between the journal entries (William's story) and the story of the treasure hunters. Fans of Minecraft won't want to miss this wild new adventure.

The part I liked was when they found Him in the overworld under ground. Good book.

It is soo nice!

Dear Winter Morgan,
I loved Lost In The End.It was really nice.I allso love An Explorer’s Guide To The Nether.I am a child.
love Odile💜

This book gets me lost in another world!

This book just lets u experience the best thing in minecraft! I recommend this book to anyone who likes to get lost!

I have young boys. They love all of the books we have listened to so far by Winter Morgan. They have simple plots and adventure. Greatful to have found books that give my kids a passion for listening to books.

I did not read the all of this And it’s not the best. Book ever.