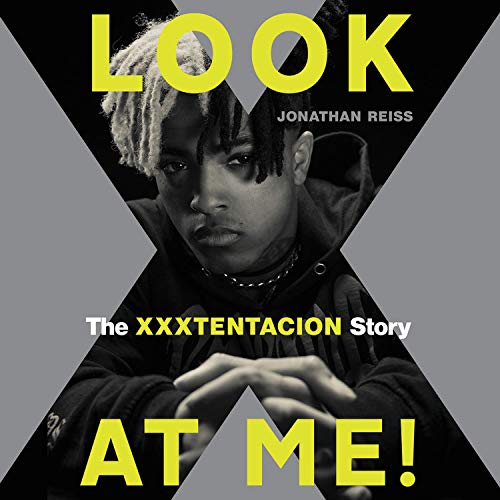 A compelling biography of SoundCloud sensation and rising star XXXTENTACION - from his candid songwriting and connection with fans to his tragic death.

At the age of 20, rapper Jahseh Dwayne Onfroy - aka XXXTENTACION - was gunned down during an attempted robbery on the streets of Deerfield Beach, FL, mere months after signing a $10 million record deal with Empire Music. A rising star in the world of SoundCloud rap, XXXTENTACION achieved stellar levels of success without the benefit of a major label or radio airtime, and flourished via his passionate and unfettered connection to his fans.

In Look at Me!, journalist Jonathan Reiss charts the tumultuous life and unguarded songwriting of the SoundCloud sensation. Unlike most rap on the platform, XXXTENTACION's music didn't dwell on money, partying, and getting high. He wrote about depression, suicide, and other mental health issues, topics that led to an outpouring of posthumous appreciation from his devoted fanbase.

It was XXXTENTACION's vulnerability that helped him stand apart from artists obsessed with being successful and "cool." Yet these insecurities also stemmed from - and contributed to - his fair share of troubles, including repeated run-ins with the law during in his teen years, a disturbing proclivity towards violence, and a prison sentence that overlapped with the release of his first single.

Through the memories of the people who knew him best, Look at Me! maps out the true story of an unlikely cultural icon and elucidates what it was about him that touched the post-millennial generation so deeply.

Great detail, a deep dive into the artist's life

What I liked most about this book is the context that it provides through well researched deep dives: into the artist's roots and culture, personal relationships, and references to other music. The book should come with a mixtape bibliography of all the songs referenced. Understanding the artist helped me appreciate his music even though it's not a style that would otherwise be on my playlist, so in other words it expanded my music world.

I did not expect this book to expose me to such a vast array of historical goods. Facts about Jamaican culture, the music industry and many a countries’ political culture(s) are immense and properly cited simultaneously . Im excited to read into many of the trivia facts learned while reading and Im only on chapter 5!

loved it. was a good read for sure.i do recommend this. it was written well.

The story of Jahseh

The author did a great job at capturing story and characters. This book goes deep into Jah’s past covering his impulsive violent behavior, his interactions with friends and family, and even a little bit of the traumas Jahseh faced early as a child. It’s important to acknowledge the bad things Jah did just as much as the great, and this book does that well.

Great listen, as a fan of X I thoroughly enjoyed it and appreciate the effort put into this project.

I’m not much of a reader but this book intrigued me due to my heavy interest in hip hop culture and the figure that the book is based around. The author did an amazing job going into and providing explanations to the background of rapper XXXTentacion and goes into great detail in explaining different aspects of his life. The author has a full objective approach to X and is non bias, I HIGHLY RECOMMEND!