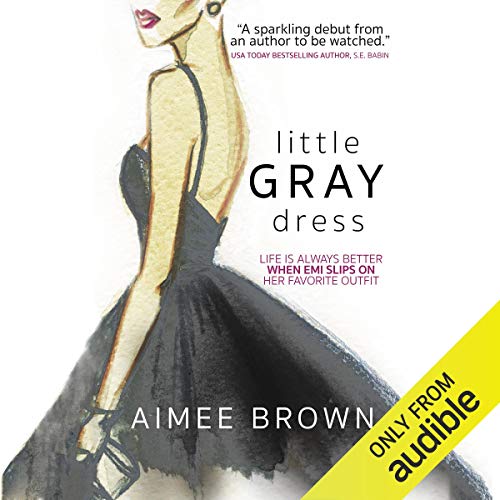 Emi Harrison has avoided her ex-fiance, Jack Cabot, for nearly two years. Her twin brother Evan's wedding is about to end that streak. From bad bridesmaids' dresses, a hyperactive sister-in-law, a mean girl with even meaner secrets, and too much to drink, nothing seems to go right for Emi, except when she's wearing her little gray dress.

When she speed-walks into Liam Jaxon's bar, things get more complicated. He's gorgeous, southern, and has no past with Emi. He may be exactly what she needs to prove for the last time that she doesn't need or want Jack!

Her favorite little gray dress has made an appearance at nearly every major event in Emi's adult life. Will it make another grand appearance when she least expects it?

Look for good thing from this author

Little Grey Dress is the first book from Aimee Brown. I found her writing engaging and fresh. The story will appeal to those who want to focus on the intricacies of circumstance and romance rather that the physical side. The book is written in a style of present day and flashback chapters. That style isn't my favorite, I found, but the plot more than made up for it.

Stephanie Einstein did a great job with narration and I found her easy to listen to. If you want a sort-of who-dunnit romance, this is the book for you. I'll listen to more books from this author.

1st book I've read by Aimee Brown ...such a great style. At times funny, sarcastic, silly ... I can not imagine ... I am curious how she came up with silly thoughts or story line. Love the cover. a quick read for me ... I know when I got married ... I wanted my bridesmaids to be able to re-use their dress ... one even cut it shorter and make it more of a party dress. I would think more brides would realize that this is a smart idea.

I loved this story! It was so witty and cute, kept me listening, laughing and invested in the outcome for the main character.

I really enjoyed listening to this book and I can’t wait to see new books on audible by Amy Brown. Characters were well written story was heartwarming.The narrator is perfect for this book

I love Stephanie Einstein's narration. The story left something to be desired, as the character development was spotty at best. Certain characters were introduced to both the reader and the protagonist as evil villains, yet there are moments in the book we're said characters seemed genuine, warm, and hospitable toward the protagonist. These discrepancies weren't explained or discussed whatsoever in the book, which left me wondering if I imagined these disparities. I did like the fact that the protagonist stood up for herself each and every time it was warranted. I don't like when books showcase a character who keeps her mouth shut and doesn't explain very explainable things. This however is in contrast to Jack, who was portrayed in the book like a weak, sniveling sucker in many ways. He didn't force certain people to listen to him when necessary, and he blindly jumped into a relationship with someone he knew to be unworthy of his love. I found that ridiculous.

This story was mostly predictable but a good, easy listen. Worth the time if you’re looking for something light and easy to listen to.

This book was so disappointing bc the reviews were so good! The characters were shallow and unbelievable..there were some who were introduced as if their parts would be significant and then they just fell off with little to no explanation..Liam was just ridiculous and served no real purpose, it was actually baffling how poorly written his entrance/involvement/exit was. The entire plot was underdeveloped and when I was listening I would find myself just shaking my head. Don’t waste your money on this silly excuse for novel.

This started out to be an adorable story until the events that continued were characters of not much substance. I listened to it all but was very disappointed in the outcome. It’s one of those books that has a woman thinking things that weren’t what they seemed. A guy that was caught in the middle and a horrible “other woman” which was found out. See! Yeah I didn’t give too many spoilers, but it just seemed like the main character gave in so easily, and seemed like “oh well”. Then all was “and the lived happily ever after”....boring

After more than halfway through the story, I couldn’t figured out what’s the story about. The story went back to the past and to the present. I didn’t care for this type of writing. The story went no where. I felt like the dressing room talk was nonsense and the author took at least an hour before another scene entered. So many senseless dialogue that shouldn’t be there. All in all, I don’t recommend this book.

This book is just sad. Also, totally disgusted by her BROTHER who continues to be BEST FRIENDS with the man who cheats on her shortly before their wedding. Then springs him on her over and over and acts like she’s the crazy one.. or that they seem to want her to get back together with a guy who was unfaithful.