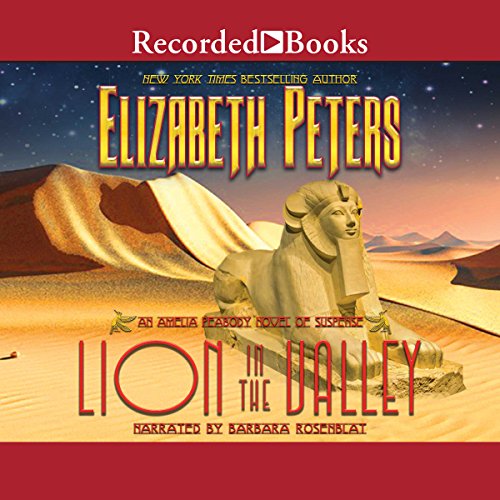 Lion in the Valley

Lion in the Valley

Amelia Peabody, archaeologist and woman extraordinaire, should have greeted the approaching excavation with transports of joy. Nothing in the world could compare with exploring the muddy, musty corridors of some bat-infested pyramid. And at Dahshoor, to which she was headed, there existed some particularly fine specimens.

But Amelia, accompanied by her quixotic husband Emerson and Ramses, their elusive son, feels an awful, nameless foreboding as she stands upon the decks of the ship that bears them across waters of the Mediterranean towards Egypt.

Perhaps it has something to do with what transpired the last time they investigated the ruins of the Black Pyramid. On that infamous occasion they came face-to-face with Sethos, that chameleon-like villain otherwise known as The Master Criminal. While successful in depriving this "genius of crime" of his ill-gotten treasure, they were thwarted in their attempts to capture him. He escaped into the night like a wily serpent, revenge embroidered upon his countenance.

It is inevitable that The Master Criminal should come face-to-face with the inimitable Amelia Peabody again, but this time it is not antiquities he is after, but Amelia herself!

Don't miss the rest of the Amelia Peabody series.
You can also check out more of our Most Addictive Series.
©1986 Elizabeth Peters (P)1992 Recorded Books, LLC

"Bursting with surprises, a sheer delight" (Publishers Weekly)
"Peters really knows how to spin romance and adventure into a mystery." (Philadelphia Enquirer)

This series is a true delight. I have read all of the books, twice - but Barbara Rosenblat brings out every nuance and makes the audio books even more enjoyable. The characters come to life with her skillful narration. While these books are certainly full of suspense, they are so funny you will laugh out loud. As a bonus, Elizabeth Peters' PhD in Egyptology enables her to give credibility to her characters' adventures and lets her audience glimpse the Egypt that tourists do not see. Bet you can't listen to just one!

This is a fun entry in the series. Elizabeth Peters has a talent for creating characters who the reader cannot wait to encounter time after time! Fortunately, she usually obliges and brings back the good guys! And here we have many of our favorites returning.

Barbara Rosenblat has become THE voice of Amelia Peabody and company. Count me among fans who look forward to her narration as much as we look forward to the next Amelia!

Yes, Peabodyitus! I have it! I love this character. Years ago, I fell into Amelia's world by accident, and I've never wanted out. Elizabeth Peters has created a character that is warm, but strong, loving, but independent. I want to follow her family around always. Of course, I don't want her to catch me doing it, she might pop me with that umbrella!

I highly recommend all the Amelia Peabody mysteries by Elizabeth. Peters because they are fun, exciting and oft times humorous.

I love all the characters but young Ramses is by far my favorite. He always has something to say and does so in as many words as possible and the trouble he gets into is amazing.

To put it simply....Barbara Rosenblat could read the phonebook and keep me entharalled!

Wonderful characters in a magical time and place. Narrator does a great job portraying the not-self-aware Amelia, so confident whether right or wrong, but always charming.

I am thoroughly enjoying this series, referred to me by a dear friend. I highly recommend this series. I must admitt that the reader (Barbara Rosenblat) has truly made the series live. Also because i enjoy many "period" movies it is easy to place faces, in my minds eye, with each character due of course to the reading of Ms. Rosenblat. Therefore you will understand that when Ms. Rosenblat is not the reader it is a great disappointment. I am now on book 8 "The Hippopotamus Pool" and only one book was not the reader I am so endeared. But please donot allow this to discourage one from reading them all! Many many hours of enjoyment await you all, Robbin Wms

I will listen to anything Barbara narrates!

I read many books of this series when I was younger, and enjoyed them in print. But, when I had an hour commute to and from work, I got hooked on books on tape. Thanks to the public library, I was introduced to Barbara Rosenblatt as a narrator. She brings these books to life. It is like watching a one person play. It is not like having a book read to you. It is like a multi-person presentation. She gives each character a unique voice and mannerisms, and maintained these consistentcy throughout the entire series. Add to that the entirely quirky and wonderful world that Peters gives us, and it is a tour de force. I will own all of these on audible. And I am game to listen to anything Barbara narrates!

For those that enjoy this Amelia Peabody Series by Elizabeth Peter; Book 4 is just as enjoyable as the others. Once again, it is a mixture of mystery and light romance and witty comedy.

I really enjoyed getting to know their seven year old son, Ramses. I also liked the rivalry I began to see between Amelia and her son.

These books are wonderful! Everything about them is good: story, narration and especially writing style. Amelia Peabody? what a fantastic name and it sets the tone for the series so far. This is a great listen, cannot recommend it highly enough

Love it - great book - great series. This series is about Amelia Peabody, her husband Emerson and their son Ramses. Ramses is my favorite character. In this book he is eight years old. He is brilliant with a vocabulary that is amazing. He loves to research and is better at solving mysteries than his brilliant parents. They are English but love to go on expeditions to Egypt to dig for antiquities. They always encounter danger, murders and mystery. They biggest challenge is Sethos, whom they call the Master Criminal. Sethos is quite prominent in this book. In this book they also encounter the twins Ronald and Donald and their female friend Inid. One of the twins is loathsome. Amelia, Emerson and Ramses are in danger and are attacked several times. As usual, people around them end up dead. The author is amazing. Her writing is charming, witty and fast paced. The dialog is quick and funny. The characters are as real as life. One reason the books in this series are so amazing is the narrator. Barbara Rosenblat is one of the top three female narrators in the business, in my opinion. She does male voices as well as she does female voices. He accents are spot on and her cadence, inflection and tones are excellent. She makes this excellent series even better. Peters and Rosenblat are a great team.