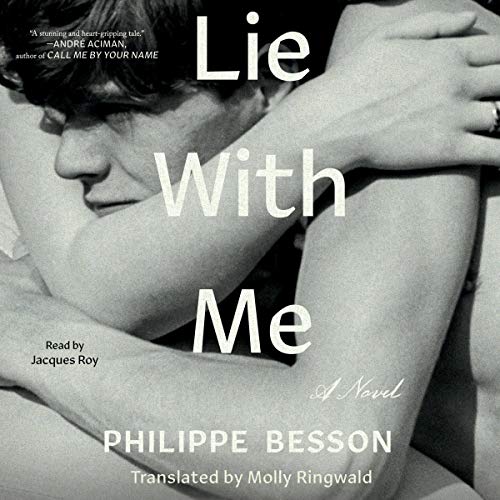 The Advocate’s Best Gay Novel of 2019

“Stunning and heart-gripping.” (André Aciman, author of Call Me by Your Name)

The award-winning, best-selling French novel by Philippe Besson - “the French Brokeback Mountain” (Elle) - about an affair between two teenage boys in 1984 France, translated with subtle beauty and haunting lyricism by the iconic and internationally acclaimed actress/writer Molly Ringwald.

Just outside a hotel in Bordeaux, Philippe chances upon a young man who bears a striking resemblance to his first love. What follows is a look back at the relationship he’s never forgotten, a hidden affair with a gorgeous boy named Thomas during their last year of high school. Without ever acknowledging they know each other in the halls, they steal time to meet in secret, carrying on a passionate, world-altering affair.

Dazzlingly rendered in English by Ringwald in her first-ever translation, Besson’s powerfully moving coming-of-age story captures the eroticism and tenderness of first love - and the heartbreaking passage of time.

Many Lessons to Learn from this Tragic Novel

This book is a must read for any gay youth struggling with living a life true to themselves. Or in fact, anyone who feels obligated to live their lives under a mask forever hiding their true selves. You’ll learn tragically what happens when someone isn’t allowed to be themself and is forced into a life that is labeled as right and normal.

This book also illustrates how our society has evolved, and how the global perception of homosexuality has shifted in such a short time. It really makes me appreciate how accepting our society is nowadays, and almost makes my common frustrations with it seem trivial.


Amazing but tragic book, with many lessons to be gleaned from it.

Recommended by André Aciman on Goodreads. I immediately downloaded it and find it has the same passion in the writing as Call me by your Name had.

Much shorter and a very quick read the book is still amazing and full of passion and heartbreak.

A great LGBT* read and again the portrayal of the coming out and family acceptance that speaks right to my heart.

Memoir or fiction, either way it's enthralling.

If the novel, Lie With Me, is not essential reading for gay men, it is as close as one can get.

It is a story beautifully and realistically written by Philippe Besson and warmly translated from French to English by Molly Ringwald. Like Edward Louis's wonderful The End of Eddy, This story seems to walk a blurry line between novel and memoir.

This is literary fiction and not genre M4M gay romance. There are none of the stale old tropes so often used by women who are writing gay male love stories for other women.

This is a recounting of one man's recollection of a teenage romance and how the impact of that romance echoed throughout the ensuing years for both individuals.

Like The End of Eddy, this is a short novel and normally I shy away from those but the craft of the writing is so immersive and enjoyable that this is worthy investment.

I'm not going to say any more about the story itself since this type of work should be left to the author to reveal.

Since there were no reviews on Audible at the time, I went into the story completely cold and I think that made the experience all that much more important and desirable.

This is a short and very enthralling read that many of us gay men will walk away from having recognized so much of what has been written by the author.

A Gem of a Book

As a period piece of two eras, mid-eighties and 2007-2008, the story is engrossing in its descriptions and writer’s voice. It links the GenX baby-bust generation with the Millennial generation with common language, understanding and interest.

Deserving of the Plaudits

Passion...heart...well placed. It's been a while since I read (listened to) a book and wanted more in the end. Great job by the author.

It was awfully sad ! I wanted a happily gay ending :/ Daymn! But in all, I highly recommend this beautiful novel and the audio book is well performed

Loved this little story for many reasons. The struggle of being gay, but also of just youthful love in general.

This was a very well written and narrated book. Almost like a poem in its flow and emotion. I plan to listen to it again and marvel in its construction.

He says: Because you are not like all the others, because I don't see anyone but you and you don't even realize it.

He adds this phrase, which for me is unforgettable: Because you will leave and we will stay."

From Lie With Me by Philippe Besson

This book is a story of young gay love that follows two high school teens in their last year of school in 1984 France. This book is a coming of age tale that also discusses sexual awakening, identity, first love, family obligations, society's judgements and pressures, shame, and mental health.

The book follows a young Phillippe who is just an average teen, and Thomas (Toe-Mah) who is the attractive jock that the girls flock to to try to win his affection, but Thomas has his eyes set on Phillippe. Phillippe is himself and doesn't really hide who he is, but doesn't just throw it out there also. Thomas though wants to get together with Phillippe, but only if it's kept a secret and no one must know they are talking, and Phillippe is okay with that. What starts off as brief sexual encounters starts to lead to more complicated and deeper emotions between both of them.

As being part of the LGBTQ+ community many of us definitely understand how these characters felt and what they go through, those forbidden loves. Living in a society where you can't be yourself, missing out on the romance and experiences of young love, and all the celebrations of your firsts. Loving someone and developing feelings for them, but you can't act on them because of society's or family judgements. This book takes us on an emotional ride that is sensual, heartbreaking, and moving.

I did enjoy this book and would probably give it more of a 3.5 stars. It's prose are beautifully written and stirs up the emotions. The characters, Phillippe and Thomas, are well done and you can connect with them and understand their thoughts and emotions. This book makes you wonder if this is a memoir of the actual author himself where he is rethinking on his own youth and past love. The author Phillippe Besson basically writes this story about a character who is also an author, who is also gay, and who also writes a book about a gay man and his secret relationship with a guy, but in the book the character Phillippe says that he only writes fiction and doesn't like memoirs. So yeah, that was interesting and slightly strange in my opinion. I also wished there was more to this story, or at least more focused parts in the story itself. There was just some random things and some jumping around which I felt sometimes distracted from the character's and their stories being told. All in all this was a good and emotional read with an ending that really pulled me in and stirs the emotions. As for the narrator, Jacques Roy, he lends a wonderful voice and talent with narration to this story that makes listening enjoyable and helps pull the listener in.

This novella is simple, yet very charming because of how realistic it is. I listened and relistened to it within 3 days!