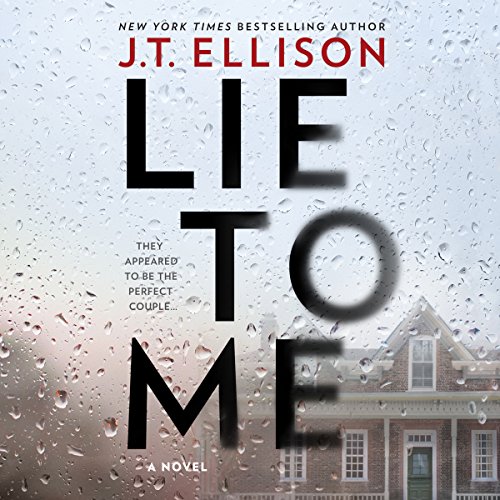 Domestic noir at its best. Listeners will devour this stunning audiobook about the disintegration of a marriage as grief, jealousy, betrayal, and murder destroy the facade of the perfect literary couple.

They built a life on lies.

Sutton and Ethan Montclair's idyllic life is not as it appears. They seem made for each other, but the truth is ugly. Consumed by professional and personal betrayals and financial woes, the two both love and hate each other. As tensions mount, Sutton disappears, leaving behind a note saying not to look for her.

Ethan finds himself the target of vicious gossip as friends, family, and the media speculate on what really happened to Sutton Montclair. As the police investigate, the lies the couple have been spinning for years quickly unravel. Is Ethan a killer? Is he being set up? Did Sutton hate him enough to kill the child she never wanted and then herself? The path to the answers is full of twists that will leave the listener breathless.

How well do you know the person you’ve married?

Lies, evasions, jealousies, tragedies…how is a couple supposed to survive? By either growing closer or moving apart. When Ethan Montclair wakes up one morning and breakfast isn’t ready, he assumes his wife Sutton has gone for a run. It never occurs to him that she’s run away. Yet her handwritten note tells him not to look for her.

Despite her request, Ethan does look. He speaks to anyone who might know where Sutton has gone and eventually even calls the police – knowing he will be considered the prime suspect in her disappearance. But he loves her and is worried. As the story unfurls, Ethan and Sutton’s lives are put under a microscope and all is not as it appears. The question is, how far will Ethan go to uncover his wife’s truth? And how is it that his perception appears to be so different than hers – if her friends and family are to be believed?

I love stories where things are slowly peeled away and layers lifted. Nothing was implausible, but the end was still a surprise.

I’m a huge J.T. Ellison fan and have been waiting with bated breath for this book. I listened to the audio in one day.

I was not disappointed.

I love psychological thrillers with unreliable narrators. In this case, there are literally a number of different voices – 4 in all. It is great that they producers decided to go with four different, and talented, narrators. Each brings something unique and I especially love Matthew’s British accent for Ethan.

If you loved Ellison’s No One Knows, you will really enjoy this one and I highly recommend it.

Very different that the typical, psychological thriller, in the way the characters and story line developed. The narrators were all very good, and kept a good pace.
The only thing I was disappointed with, was that once you “figured it out”, it seemed kind of rushed to an end, and fell flat. But I do still definitely recommend it! Read it or listen, it’s a great story.

It was like the author needed to fill up pages and the main character repeated himself over and over and over again and he was such a wimp I couldn’t stand it. It was very amateurish all the way around couldn’t even finish it I returned it

It’s hard to read or listen to a book when none of the characters are realistic or remotely likeable. Awful. Didn’t get far before I had to stop. Save yourself. Get another book.

Not a page turner, but worth the credit

I know, it sounds contradictory. It moved slowly, but not in a horrible way. Part of the seeming drag may have come from the narration in the first half of the book - I had specifically searched for something narrated by Julia Whelan (if they can afford her, I assume it might be good), and Julia’s narrative doesn’t appear much until the second part.

Parts of the story were predictable; parts were surprising. I’m not sure if the latter outweighed the former. I had about 4 hours left when I really felt engaged.

The story is certainly unusual. Not in a bizarre way, but in an original way.

I’m sure I’ll listen again, as I do most of my library in time, but it will be a while.

We are all good people until we aren't.

Yes! One of the best psychological thrillers that I've read in quite some time!

Absolutely. You knew they were being set up, but figuring out who and how was an intense ride. Then at the end, you think you know everything, until the detective returns with more news.

Everything! Perfect narration for this book!

Hard To Keep Up

Use The Cone Of Silence

This book started out good. There was suspense, a little action, and great character development. I really cared about the characters. I even enjoyed how the focus/point of view changes throughout the book. However, it changed once or twice from the third person to the first person and it seemed like a rough transition. Still, the book was engaging until the last hour or so. Then, there is a big information dump that just makes the whole book feel cheap and the reader cheated. The plot runs out of steam. Some of the characters’ actions are also not consistent with their personalities.

The narrators were great and were probably the only reason I finished the book.

The person that wrote 'GONE GIRL' should sue this author. It mimics Gone Girl in so many ways but it was dreadfully done. I found myself fast forwarding so much, I basically listened to about a third of the book.

Just when you thought J.T. Ellison couldn't get any better, here comes Lie To Me. If you love a good #who done it" with some mystery added in, this is your book. The twists and turns in this book makes it a non-stop read.