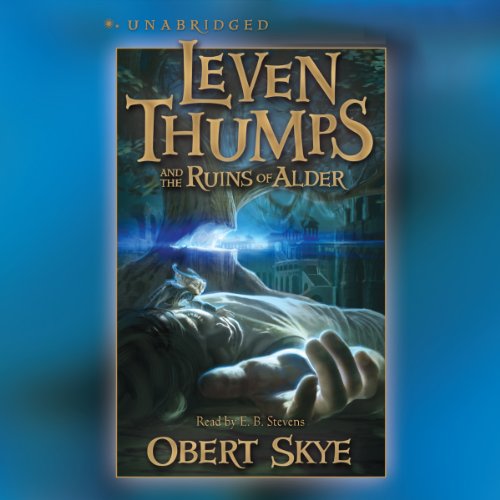 Leven Thumps and the Ruins of Alder

Leven Thumps and the Ruins of Alder

The amazing finale to the best-selling series! In the fifth and final volume of the epic saga of Leven Thumps, all of Foo is rushing madly to exit the realm of dreams while Leven is headed in the opposite direction. Fate snatches him to the island of Alder, where he is poised to pass or fail the final test. Meanwhile, in Reality, Ezra and Dennis are welcoming those flowing out of Foo - but only so they can selfishly conquer them and gain control of both realms. Phoebe is loose, and it takes Geth getting a hold of her to begin to balance the emotions and passions of all that is crumbling. And Winter? Well, Winter just might hold the answer to everything. Ride with Leven and Clover as they travel through the ruins of Alder hoping he has what it takes to save all mankind and restore the power of dreams.

amazing overall, ending was drawn out

I have thoroughly enjoyed this entire series. I found every book hard to put down extremely engaging, and have flown through the series in about 10 days. however the last five to seven chapters of this last book I found was very drawn-out & hard to stay engaged in. aside from that the ending was fantastic and I can't wait to jump into the follow-up series. thank you Obert Skye & EB Stevens for this masterpiece!

I love this story. I was sorry to see it end. EB Stevens is a phenomenal narrator. This is not the first series I have listened to that has been narrated by Evie Stevens I can't wait to find the next one. and there will forever be little things that make me think of Foo

As always Obert Skye did a fantastic job! E.B. Stephen is always wonderful. I highly reccomend this series!

the book is just too good, couldn't bear a moment of my life not listening it
.

Leven thumps is a great book for kids of all ages!!! I loved how the narrater did lots of different voices!!! Read it, its a great book