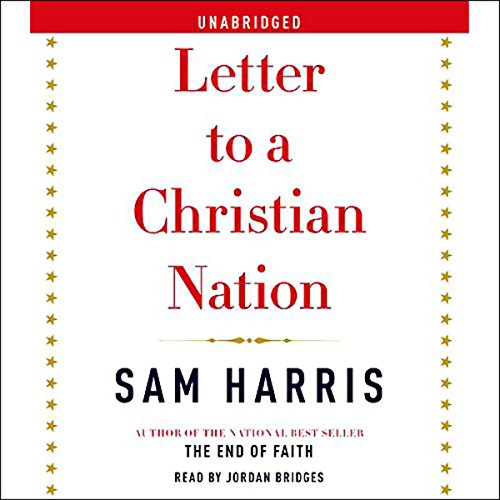 Letter to a Christian Nation

"Forty-four percent of the American population is convinced that Jesus will return to judge the living and the dead sometime in the next 50 years," writes Sam Harris. "Imagine the consequences if any significant component of the U.S. government actually believed that the world was about to end and that its ending would be glorious. The fact that nearly half of the American population apparently believes this, purely on the basis of religious dogma, should be considered a moral and intellectual emergency."

In response to his award-winning best seller The End of Faith, Sam Harris received thousands of letters from Christians excoriating him for not believing in God. Letter to A Christian Nation is his courageous and controversial reply. Using rational argument, Harris offers a measured refutation of the beliefs that form the core of fundamentalist Christianity. Addressing current topics ranging from intelligent design and stem-cell research to the connections between religion and violence, Letter to A Christian Nation boldly challenges the influence that faith has on public life in the U.S.

This message was supposed to reach a large audience. Why is it so expensive for less than 2 hours of audio?

Sam Harris poses questions that many Christians cannot answer. He clearly disagrees with all religions and is atheist but that does not take away from his credibility. I am not a christian and still found this book very interesting. I really like his style of writing as well, it's more of a conversation then a letter/book. I suggest everyone read this book, even if you don't agree with it, even if you're a christian, you don't know if your faith is true faith unless you can question it.

Sam Harris gets my vote for the bravest man in America and the most rational, too.

No body likes athiests; they are reviled by all. Yet Sam Harris has stood up and said enough already with God, with all religions. He poignantly argues his point that religion isn't working so maybe we should try something else...how about reason. He says that no one has ever died from too much knowledge or reason.

This work is concise. He gets straight to the point and doesn't waste your time. I agree with the other reviewers who say that this should be required reading (and thinking) by all. We need a different paradigm in which to see the world if we are going to move forward. Sam Harris provides a new paradigm and is thinking outside the box. Are we going to continue our insane wishful thinking or are we going to make a change in time to save ourselves and to progress?

Sam Harris has written this short work as a follow-up to his earlier book THE END OF FAITH (also available now from Audible).

Although titled in a way that suggests that christianity is the target of Harris' analyses and arguments (or, of that christian variant that insists the USA is, or should be, a "christian nation") don't let that mislead you.

It is actually a hyper-rationalist critique of religion in general, christianity simply providing the framework for structuring the arguments.

The work is well read and sufficiently short (a bit under two hours) that most would probably benefit from listening two or three times, at least to have given all the arguments a fair hearing.

An enormous amount of material is covered in the book and it would be no surprise to find that one argument or another triggered so emotional a reaction in the listener that portions of subsequent material were missed.

The book is a challenge to the religious, a challenge to apply the same rationality to religion and religious beliefs that we commonly apply to all other aspects of our world and lives.

Harris' appeal to the Christian masses is both poignant and respectful. Without using straw men, he clearly articulates some of the major issues with religion and its effects on modern day life. Throughout his letter he remains appropriately considerate of his thoughts' potential shortcomings, which is a refreshing change from the arrogance of some other notable atheist scholars.

This is a very important work and is something everyone should listen to.

This is like a "God Delusion" pared down and easy to listen to. It was well written, excellent narration. Cuts to the chase. I've already listened to it twice and will listen to it again from time to time to get a refresher.

This is a great book, but should not have been necessary. The End of Faith should have been sufficient and I recommend starting there. If you are not prepared to put in the extra time, then this is the one for you.

Liked it better than End of Faith

This book resonated for me as few before, but I've yet to see any comments on the reader, Jordan Bridges. This is among the finest and most engaging readings of a any work I've acquired. While not perfect, Bridges hits Harris' tone and intent time after time, matching him almost note for note. At times angry, sarcastic, witty, emotive and always passionate, this is a very fine effort that deserves recognition and respect. I hope we are lucky enough to hear Harris' next work read by Bridges.

What did you love best about Letter to a Christian Nation?

The openness of the discussion.

Mr. Harris's ability to discuss subjects that would be a taboo to most writers

What does Jordan Bridges bring to the story that you wouldn’t experience if you just read the book?

Mr. Harris addressed tough issues that most would be afraid to discuss.

I appreciated the honesty to address what many of us feel but are not comfortable to discuss openly.