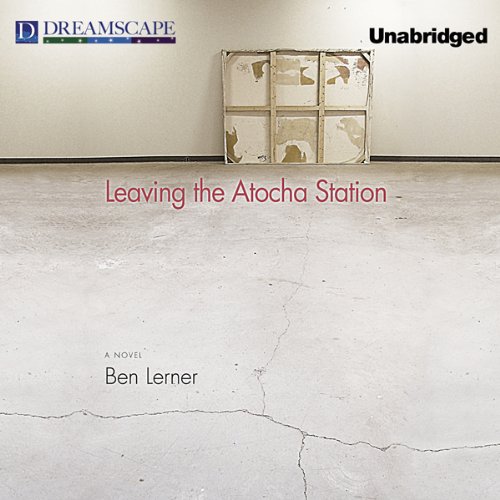 Adam Gordon is a brilliant, if highly unreliable, young American poet on a prestigious fellowship in Madrid, struggling to establish his sense of self and his relationship to art. Instead of following the dictates of his fellowship, Adam's 'research' becomes a meditation on the possibility of the genuine in the arts and beyond: are his relationships with the people he meets in Spain as fraudulent as he fears his poems are? Is poetry an essential art form, or merely a screen for the reader's projections? A witness to the 2004 Madrid train bombings and their aftermath, does he participate in historic events or merely watch them pass him by?

"[A] noteworthy debut.... Lerner has fun with the interplay between the unreliable spoken word and subtleties in speech and body language, capturing the struggle of a young artist unsure of the meaning or value of his art...[and] succeeds in drawing out the problems inherent in art, expectation, and communication. And his Adam is a complex creation, relatable but unreliable, humorous but sad, at once a young man adrift and an artist intensely invested in his surroundings." ( Publishers Weekly)
"Well written and full of captivating ideas." ( Library Journal)
"[P]rofoundly evocative.... [Lerner] cleverly, seductively, and hilariously investigates the nature of language and storytelling, veracity and fraud." ( Booklist)

I loved this book & I’m not sure why. I think part of it is the language (the author is a poet), the other part is how believable the main character is as a human being.

Adam has a serious case of imposter syndrome, and his way of dealing with this is sometimes to lie, try to look or sound mysterious (I'm not sure how well that actually works for him), or pop anxiety pills. His lies are painful not least because he’s absolute rubbish at remembering that he lied at all. He’s terrified the people around him will see him as a fraud. He’s uncomfortable, we’re uncomfortable but the people around him in the book seem to be completely fine with it all, although he ascribes to them a higher wisdom than is likely. He thinks he's a fraud as a person & as a poet & neither of these seem likely. He certainly puts too much meaning in to his interactions with others & overthinks things.

A lot of this book is us spending time in Adam's head. His perspective is definitely warped though so we see some things he doesn't. He's a painful character (in the sense of cringeworthy) but he's incredibly human & like cellophane - at times we see right through.

The narration is excellent. Initially I was bothered by the monotone of the author's voice, the flattened affect, but getting further into the book this is the perfect voice for Adam.

Captured the Challenge of second language

Where does Leaving the Atocha Station rank among all the audiobooks you’ve listened to so far?

The author wrote beautifully about that weird place of understanding enough of the language and culture to pass as fluency and then never be quite sure of what you heard, said, or took place. For any of us that have been there , it was beautifully done: did he say this or that? Was it future or past? what did I just say? A story that might be ho hum takes and humor and sadness from this perspective.


Which character – as performed by Ben Lerner – was your favorite?

I loved that the reader was the author, He made it rich with his feelings and confusion. The emotions were so heart felt.

I recommend this to anyone who has lived abroad or travelled knowing the languge just enough to get into trouble looking fluent.

The words in our heads

Once again I'm reminded of all the things that writing can do that's difficult for film to achieve. Lerner's painting of unverbalized intentions, beyond those revealed via internal monologue is a beautiful portrayal of the real human mind.

This is one of those necessary books. A forever book. Stunning. And read beautifully, simply.

Not a bad story but the narrator read it so badly that I didn't finish it. Lerner's reading of his story was monotone and self loathing. The why bother life is awful style of reading drove me crazy!

No, unfortunately. It’s been getting good reviews and I wanted to like it--right up my alley, a poet in Madrid--but I found the narrator to be insufferable, self-important in a passive-aggressive way and at the same time self-loathing, manipulative, self-centered, hand-to-the-forehead. The only way we see secondary characters, like women who somehow love him, is through his worry about how his lies and manipulations will affect them. I appreciate the examination of language, how it can be twisted, how we don't understand each other, specially with the added burden of translation. And the telling is perhaps bravely naked, exposing this character's most gutter self, but he is not someone I want to spend time with. I listened to the end because it was short (thank god) and I wanted to see if it then was redemptive. It wasn’t really, just grumpy and depressed.

Has Leaving the Atocha Station turned you off from other books in this genre?

Would you be willing to try another one of Ben Lerner’s performances?

Ben Lerner's performance worsened my reaction to his book, as he reads a lot of the prose in the dreaded Poet Voice, intoning rather than with natural speech inflections. It's possible the book might have been livelier, funnier in places, and less inescapable if I had read it. Maybe a different reader would lend the narrator more inflected variation.

In Leaving the Atocha Station Lerner gives us an at times painful view of a youthful, contemporary American poet growing while living in Spain.

Behind a blur of hash smoke, thunderous post party hangovers, lies, and barely mentioned sex his phoney protagonist, dangles before us doing very little but sating appetitites. Through self overhearing, reflection and the resounding blasts of wars past, and present, he finds language, it's beauty and terrifying truths. His sole extant path to individuation.

Hate the Narrator, Love the Novel

At various points the narrator of this book—an immature and just plain annoying young poet squandering his year on a Fullbright in Madrid—considers killing himself by taking all his medications at once. I found myself hoping he wouldn’t kill himself not because I had any sympathy or care for him but because if he died then the novel would be over and I wouldn’t be able to hear any more of his clever/interesting/vaguely profound insights. Good book once you get past hating the narrator.

Matched the Protagonist's State of Mind

Would you listen to Leaving the Atocha Station again? Why?

Only for the author reading in the style and detachment of the protoagonist.

Since the character was irritating, I don't think it would have been.

Didn't necessarily have a favorite scene

Do not allow the author to read this book. He ruins what is an interesting and intelligent and surprising story. What is it about professional writers that make them think they are the only one who can do justice to their novel ? Let the professional readers read and the writers write.

What was one of the most memorable moments of Leaving the Atocha Station?

The drowning in Mexico

no it is all psychological