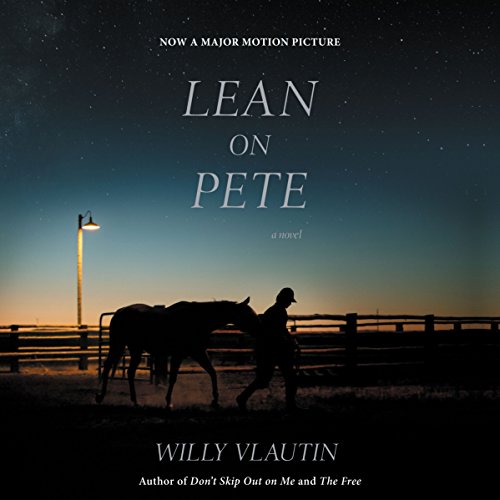 Willy Vlautin's award-winning novel Lean on Pete, a moving and compassionate story about a 15-year-old boy's unlikely connection to a failing racehorse as he struggles to find a place to call home - now a major motion picture from A24, the studio behind Moonlight and Lady Bird, starring Charlie Plummer, Steve Buscemi, Chloë Sevigny, and directed by Andrew Haigh (45 Years, Looking).

Fifteen-year-old Charley Thompson wants a home, food on the table, and a high school he can attend for more than part of a year. But as the son of a single father working in warehouses across the Pacific Northwest, Charley's been pretty much on his own. When tragic events leave him homeless weeks after their move to Portland, Oregon, Charley seeks refuge in the tack room of a run-down horse track. Charley's only comforts are his friendship with a failing racehorse named Lean on Pete and a photograph of his only known relative. In an increasingly desperate circumstance, Charley will head east, hoping to find his aunt who had once lived a thousand miles away in Wyoming - but the journey to find her will be a perilous one.

In Lean on Pete, Willy Vlautin reveals the lives and choices of American youth like Charley Thompson who were failed by those meant to protect them and who were never allowed the chance to just be a kid.

" Lean on Pete riveted me. Reading it, I was heartbroken and moved; enthralled and convinced. This is serious American literature." (Cheryl Strayed, Oregonian)

Oaf, that was tough

This was a sad story and depressing story for me. I typically like dark, but at times it was too much going wrong and nothing going right. The main character goes through a lot, but doesn't express to the reader the emotions that go with it. So, I felt distant from the story and characters most of the time. I liked the readers voice and it fit the story and main character.

A sweet story, kind of sad at times. Happy ending. I really enjoyed it. The reader's voice very enjoyable.