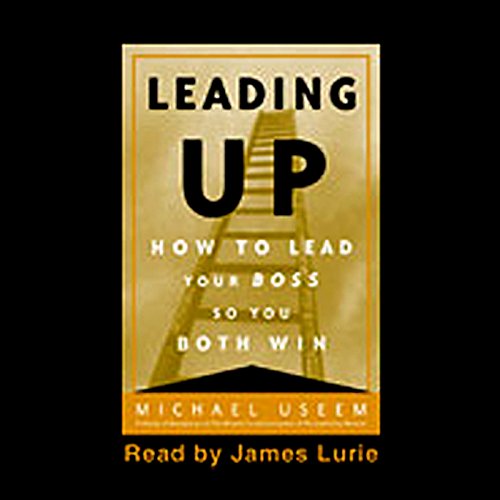 Eight true stories show that leaders today aren’t just bosses, they’re self-starters who take charge even when they haven’t been given a charge. Upward leaders get results by helping their superiors lead.

They make sure that good ideas don’t die on the vine because a boss’s understanding doesn’t reach down deep enough into the organization. Upward leadership assures that advice arrives from all points on the corporate compass, not just from the top down. And it applies at every level: Even CEOs need to learn about leading up because they ultimately answer to their boards.

Leading up is not the same as managing up. Managing up is running the office; leading up is taking the reins and exceeding what’s expected. As hierarchies everywhere shed much of their rigidity, upward leadership at all levels becomes more possible - and more necessary.

Leading Up is a call to action. It asks us to build on the best in everybody’s nature, and it offers a pragmatic blueprint for doing so.

"Teaching your boss is the most important thing that anyone in business, government, or the nonprofit world needs to know. Leading Up is a must-read for everyone." - (Leonard Lauder, chairman, The Estee Lauder Companies, Inc.)

I wish that I had read this earlier

I have been through various leadership schools in the military and private sector but nobody ever talked about the need of leading your leaders. This book provides anecdotal accounts of figures in political and military history whose ability to lead up determined the fates of countless others. This book is a broad brush view into the area of how leaders can effectively manage the ones they are tasked with following. I think this is a good read for anyone in management or with a desire to get there.

If you enjoy very long-winded stories about people placed in challenging situations calling for leadership (with heavy emphasis on military and political leaders, vs. business), then you may enjoy this. But if you're looking to cut to the chase and get more than the most obvious, common-sense suggestions -- e.g., keep your boss in the loop; build lateral support for your initiatives -- then look elsewhere. Also, the author only relays stories about others; we learn nothing about his background, credentials, or first-hand experiences.

Hard to follow. Do not recommend. References were outdated and put me to sleep. Do yourself a favor and pass.

This book started off strong. Who doesn’t love strong examples of Marines leading as they should? But in Chapter 8 he stretches a little too far trying to us biblical prophets as examples and only mildly recovers by the end of the chapter. There are also a bunch of half hazard examples in the very last chapter like he was stretching to reach a certain word count. You can probably cut your listening short just after the halfway point. I was stuck in an airport, so I don’t consider my time wasted.

Offers various examples to draw important lessons without going too deep. Even if you think you are a good leader, each chapter provides a different case study and perspective from which you can grow and be better.

One of the best career book

this was incredibly useful. I strongly recommend

for any leader or compitent team member should read this book!. the examples that were used are powerful and well placed to drive the importance of this concept.

just the advice I needed for my current situation.

This audiobook was insightful and easy. Great stories convey important concepts for leading from the middle.

The long and winding road

Actually this book is a bit of a difficult case. There are not too many books on the subject of "upward leadership" and that made me get it. The book contains a lot of interesting and relevant text with bits of distilled wisdom, which are relatively few considering the length.

The book is based on one business story per chapter, which is used to demonstrate (or, rather, illustrate) a particular lesson in leading up. While this makes it a longer book the stories are far too extensive, detailed, repetitive for my taste and - that's probably a bigger flaw - anecdotal and potentially prone to flawed conclusions. The slightly too dramatic presentation is acceptable and clear, even though this is not a mystery novel.

The points made are still very valid, though a larger and more diverse set of real-world examples would have been a stronger basis for separating the general from the circumstantial.

The tension between the two opposing poles of "respect and serve your boss" and "get any help you can to circumvent your higher-ups" is essentially not addressed and I could not really find elements of insight on that matter. However, since this is a very difficult aspect of leadership my expectation was not high, so I don't consider that a substantial flaw - you might see that differently of course.

In summary: Very good material which I liked overall, though an abridged version of three hours or so would have been better for me.