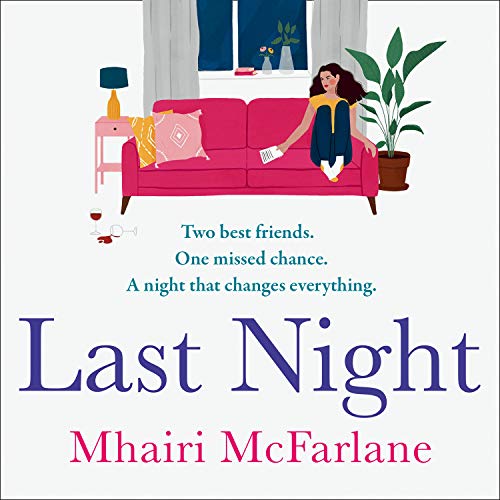 Two best friends. One missed chance. And a night that changes everything.

Eve, Justin, Susie and Ed have been friends since they were 18. Now in their 30s, the four are still as close as ever, Thursday pub quiz night is still sacred and Eve is still secretly in love with Ed.

Maybe Eve should have moved on by now, but she can’t stop thinking about what could have been. And she knows Ed sometimes thinks about it, too.

Then one night, in an instant, all their lives change forever. And, as Eve learns she didn’t know her friends as well as she thought, she also discovers she isn’t the only person keeping secrets....

"Gorgeously romantic, as well as a story about friendship and grief and loss; I never wanted it to end." (Beth O’Leary, number-one best-selling author of The Flatshare)

Witty, funny, sensitive story with characters that grow on you. Finished in one day (including staying up almost all night). Very very enjoyable. Going right back to listen to it a second time to savor the language, now that I know the plot.

Nice story if you want a mild story of love

I must say I'm a little disappointed with this book. I really like most of Mhairi McFarlane books so maybe just didn't reach the expectations I had. It's a story that has a mildly interesting story of love if you can hold on the first 16 chapters of 46, in which mainly the main female character drowns and whains a little too much in her depression in not such an introspective way. The love story and turns that develop during the story between her friends and new acquaintances are quite nice and real yet they lack a little of fluidity of the story. I don't know if it's because apart from the part of her friend's loss there really isn't more to the story or the main character. The idea was good though I can't take the impression is quite mild.

I am so disappointed in this book! I am usually a huge Mhairi fan but this was honestly terrible. Take it from someone who reads and reads and reads. There are unfortunately no positives and nothing to brighten up the terribleness of this book :(

bought it because someone called it a funny storie....
only dead and funeral content
quit after lesson 16 and expecting a change which did not come...

Thank you. What a beautiful story. Quite unexpected and it touched me deeply. Maya read it perfectly, I loved it. I highly recommend this book.