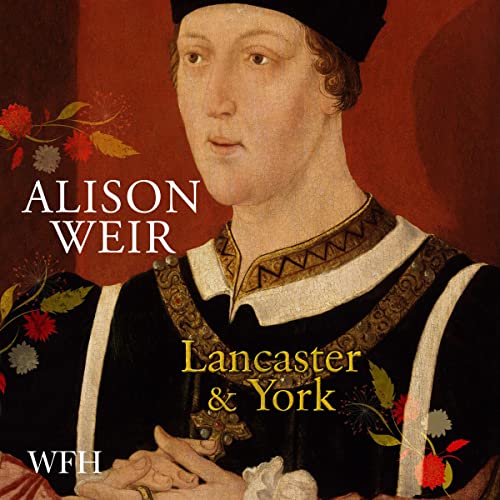 Lancater and York is a riveting account of the Wars of the Roses, from the beloved and best-selling historian Alison Weir. The war between the houses of Lancaster and York was characterised by treachery, deceit, and bloody battles. Alison Weir's lucid and gripping account focuses on the human side of history. At the centre of the book stands Henry VI, the pious king whose mental instability led to political chaos, and his wife Margaret of Anjou, who took up her arms in her husband's cause and battled in a violent man's world.

If you are narrating a brilliant historical tome, and you feel the urge to give the French chroniclers silly French accents, and the Italian ambassador a silly Italian accent, and the Scotsmen a Groundskeeper Willie accent...don’t. Just. Don’t. It’s really distracting.

The time before the Tudors has always confused me - its a turbulent history of different dynasties deposing kings and restorations, of genealogies and bloody battles. The Tower of London the main prison at that time almost had a revolving door on it!

It intrigued me but remained confused - not so after Alison Weir's book. I was riveted and hung on every sentence as the political ambitions were explained as were why and how thing happened in the sequence they did. Weir obviously did extensive research and it showed but not in a negative learned way but in precise and clear explanations.

My only criticisms were the annoying translation of pounds, shillings and pence into modern pounds and "pees" but leaving Marks and Livres totally untranslated to modern amounts and Maggie Mash's accents grated occasionally.

I recommend this book to those who love old English history and a jolly good tale of medieval murder and mayhem.

Narration is awful but still a good story

The narrator is awful, and very irritating in that every time she reads a quote from the book she puts on some great affectation with a strange accent. She ends up sounding like a cackling witch from a Shakespearean play. The author does good Job of telling an interesting story about a time. I’m very interested in. This is the second book from this author that I have purchased, and I am looking forward to listening to many more.

One of Alison Weir’s most interesting histories- I say this bc I already read so much about War of the Roses, yet she still had me on edge of my seat. Weir is one of the finest writers of popular history.

Ok. Now I have to tackle the narration issue: First, I’ve listened to Maggie Mash so many times, and she is an excellent narrator. She has a beautiful natural voice and when she uses it in this book, it’s lovely.
However, she makes an extremely odd choice (considering this is History and not a bedtime children’s story) of using fake accented voices for direct quotations. Venetian envoys, French diplomats, even English court justices, all have distinct “character” voices that are absolutely ludicrous and, unfortunately, very annoying.

I still finished this book and loved it. I just wish Ms Mash hadn’t made the choice to use bad character voices and foreign accents for every quote in this book.

Finally I once again make a plea to Audible: I’ve been begging continually for 5+ years. Please record “The Princes in the Tower”. It is one of the most important of Weir’s books and is mentioned in the preface of this one. I can’t believe it’s not been recorded already...

New insights into the Cousin's War

I really enjoyed this book about the events leading up to and the early years of the War of the Roses. Most authors start with the reign of Henry VI, however Ms. Weir starts earlier with the reign of Henry IV and the beginning of the Houses of Lancaster and York, all decedents of John of Gaunt. Given this perspective one is allowed to understand the family conflicts that lead to the war. This perspective on the story gives us new insight into why it is indeed the Cousin's War.

Previous reviewers have commented negatively on Ms. Mash's narration due to her use of accents. I do agree that they were grating, especially since they were mostly used for phrases within a sentence. However, we must remember that things such as the use of accents and the placement of these accents falls within the purview of the director not the narrator. The director is responsible for this decision, not the reader. On the whole I have always enjoyed Ms. Mash's narration of books and I will not hold the director's decision against her.

to be listened to more than once.

Maggie Mash is a wonderful narrator. I always find something I missed in the original listen. Alison Weir always manages to write real history and include the juicy bits.

An interesting history marred by narrator

Alison Weir's histories are usually well researched and written, so I was happy to get this. But the narrator, Maggie Marsh, does great disservice to the text. While a good narrator will use some vocal clues to point up changes of voice in a reading, Ms. Marsh uses broad "accents" that border on characature - perhaps sliding into offensive. This is distracting and does not make the narration better, in fact I'm suprised that a director or the author let it slide by.

Accents by the narrarator were unnecessary, and pacing was a touch slow for my taste, but overall well delivered.

The book itself is generally unbiased, if clearly critical of York, Lancaster and Tudor. I was a bit annoyed, as I had hoped the book continues farther a few years to include Bosworth, but I still enjoyed the finish.

really good telling of a fascinating period in English history, the narration is good, however the accents are very off putting.

Other than the unnecessary and MOST irritating dramatization, the reading of the book was excellent.

i do love the author, but the woman reading the audio book takes a ridiculous fake italian accent while reading the letters of the italian ambassador. it is unbearable and quite sad.

I really enjoyed listening to this audiobook, though I suppose it helps to already know a little bit about the time period. Personally, I didn't care for the narrator's use of accents and would gave preferred plain English, but that's just a matter of preference. Otherwise the narrator was very easy to listen to. Completely recommend this audiobook!