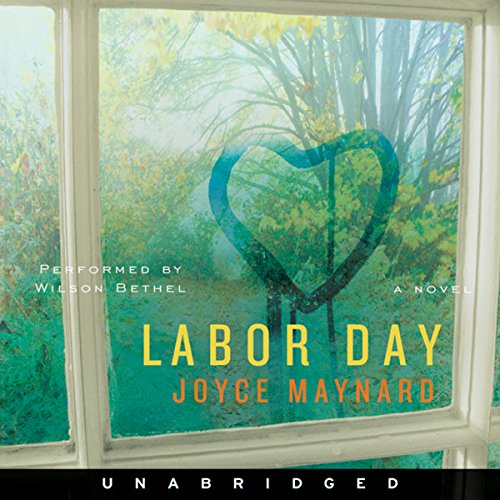 Narrator Wilson Bethel's voice evokes the tension of a young man standing on the precipice of becoming a man. Bethel uses an adolescent voice to describe Henry's longings for love and his adolescent wonderings about life. Bethel shines in portraying Henry's relationship with his mother, giving their interplay the realistic back-and-forth style that many mothers and sons share. As Adele's sad secret is finally revealed, Bethel's delivery turns melancholy. Listeners will appreciate how Bethel's narration infuses the dramatic story of a life-altering time in Henry's life with strength and empathy.

With the end of summer closing in and a steamy Labor Day weekend looming in the town of Holton Mills, New Hampshire, 13-year-old Henry - lonely, friendless, not too good at sports - spends most of his time watching television, reading, and daydreaming about the soft skin and budding bodies of his female classmates.

For company, Henry has his long-divorced mother, Adele - a onetime dancer whose summer project was to teach him how to foxtrot; his hamster, Joe; and awkward Saturday-night outings to Friendly's with his estranged father and new stepfamily. As much as he tries, Henry knows that even with his jokes and his "Husband for a Day" coupon, he still can't make his emotionally fragile mother happy.

Adele has a secret that makes it hard for her to leave their house, and seems to possess an irreparably broken heart. But all that changes on the Thursday before Labor Day, when a mysterious bleeding man named Frank approaches Henry and asks for a hand. Over the next five days, Henry will learn some of life's most valuable lessons: how to throw a baseball, the secret to perfect piecrust, the breathless pain of jealousy, the power of betrayal, and the importance of putting others - especially those we love - above ourselves. And the knowledge that real love is worth waiting for.

In a manner evoking Ian McEwan's Atonement and Nick Hornby's About a Boy, acclaimed author Joyce Maynard weaves a beautiful, poignant tale of love, sex, adolescence, and devastating treachery as seen through the eyes of a young teenage boy - and the man he later becomes - looking back at an unexpected encounter that begins one single, long, hot, life-altering weekend.

"Maynard's inventive coming-of-age tale indelibly captures the anxiety and confusion inherent in adolescence, while the addition of a menacing element of suspense makes this emotionally fraught journey that much more harrowing." ( Booklist)

It's not that this was a bad story, I just didn't like the way it was told. It found it creepy hearing the love scenes between Adele and Frank through the eyes (and ears) of their tween son, and the images of the mother telling the things that she did (which were completely inappropriate) to her son made me uncomfortable. Perhaps that was the intent of the writer. If so, well done. But I wouldn't recommend this book to someone, and I am not anxious to see the movie, like I usually am after a good book.

Would you try another book from Joyce Maynard and/or Wilson Bethel?

I've read a couple of Joyce's books. They're like a peanut butter sandwich. Tastes good when you're in between new things to try. A staple. Good writing but missing something to make it great!

The performance was fairly well done -- crisp audio with decent acting. It was a short audiobook, but I didn't find the story all that engaging. It seemed to go very quick with just a couple of historical subplots that wrapped up very quickly and all too neatly. I would've liked to hear much more depth in both the characters and plot.

Where does Labor Day rank among all the audiobooks you’ve listened to so far?

It's probably up there. A bit drawn out sometimes.

It was entertaining. Talk of could have been toned down a little.

Have you listened to any of Wilson Bethel’s other performances before? How does this one compare?

No he's a unique storyteller.

Not really it took time to get used to it.

I would not recommend this book. The narration was nice, but the story was shallow and predictable.

Powerful story of a family undone by tragedy, and restored by the grace of a man who was imprisoned by the law, and redeemed by love. Told through the eyes of a perceptive and unhappy teenage boy, it’s the story of the healing power of love springing up in the least likely place - a house over one very long hot weekend. Beautifully narrated by the young boy, it captures the foolishness and beauty of a family finding peace in the ashes of sadness.
Plus a riveting treatment of the power of food (especially pie) to help healing happen.

There is so much about what matters in life in this book. So much about perceiving the little things that matter, that stick with us, that define us. It is a beautiful story, poetic, romantic and electrifying. The performance was also very well done. Thank you!

I could relate to the emotions if the characters. Joyce Maynard never disappoints this reader

Great love story, easy to listen to. Highly recommend if you want an easy, entertaining listen.