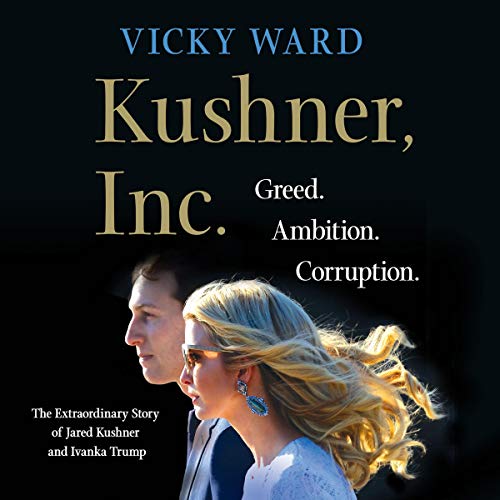 This program includes a foreword read by the author.

The first explosive audiobook about Javanka and their infamous rise to power.

Jared Kushner and Ivanka Trump are the self-styled prince and princess of America. Their swift, gilded rise to extraordinary power in Donald Trump’s White House is unprecedented, unconstitutional, and dangerous. In Kushner, Inc., investigative journalist Vicky Ward digs beneath the myth the couple has created that depicts themselves as the voices of reason in an otherwise crazy presidency and reveals that Jared and Ivanka are not just the president’s chief enablers, they are, like him, disdainful of rules, of laws, and of ethics. They are entitled inheritors of the worst kind; their combination of ignorance, arrogance, and an insatiable lust for power has caused havoc all over the world and threatens the democracy of the United States.

Ward follows their trajectory from New Jersey and New York City to the White House, where the couple’s many forays into policy making and national security have mocked long-standing US policy and protocol. They have pursued a personal agenda that is making them very rich while their actions have mostly gone unchecked. In Kushner, Inc., Ward holds Jared Kushner and Ivanka Trump accountable: She unveils the couple’s secret self-serving transactional motivations and how those have propelled them into the highest levels of the US government where no one, the president included, has been able to stop them.

Ok, I listened rather than read the book so I did not have benefit of the endnotes. ward has a good reputation so I give her credit for veracity. But I was looking for more insight and less gossip. Nonetheless the book is good.

The narration on the other hand is abysmal. The woman could hardly pronounce names and made any American sound like a thug from the Bronx. Terrible!

Too many reading errors!

The story is compelling, but the reader mispronounced many words. The proper nouns might be somewhat forgivable, but often there are errors on more common words. For example, she said “predicted” when “predicated” would have made sense in context. She also read “indicated” when I thought it should have been “indicted” to have made sense. Is there no editing?

Great story but narrator was a disaster

Surely someone involved in this production has heard of the prominent American political players named in this book and could have corrected the narrator. She couldn't even get Mrs Trump III's name right, calling her meh-LAY-nia.

Her attempts at American accents were even more cringe-worthy.

Maybe the producers felt they needed a British voice because the Author is British, but this one showed she had no familiarity with the subject or people involved and apparently no one was willing to correct her.

Luckily the story was engaging and well written. Sadly it was nearly ruined by the narrator.

Difficult to listen to.

I powered through the intro, even though the way the author rhymes Ivanka with 'I bank uh' is grating. But then the narrator, who also has a pleasant English accent, started reading quotes in a bad American accent. I lost my will to endure. I'm just going to pick up the Kindle version instead.

OMG I wanted to take shower after every chapter. Such slimeballs. So discouraging to know that the Kushner/Trump society is running our lives.

The narrator was awful. Mispronunciations (e.g., are they the "sats" or S-A-Ts?), which truthfully should have been caught by the director, but also trying way too hard, without success, to recreate the male and "NY Jew" voices. Wish I'd bought the Kindle version.

Read it; don't listen to it

I'm enjoying the content of this book, but the narration is one of the worst I have heard from Audible. Ms Hardingham has a girlish style that I would describe as "flouncy", and is decidedly over-dramatic. Frequently, her phrasing and pauses indicate that she doesn't really understand the meaning of what she is reading. Also, she inexcusably mispronounces many names of well-known people who are frequently in the news. Did no one listen to her narration before releasing it? I'm adding her to the list of narrators that I will avoid at all cost.

This story is not done justice. Very little background and very little new reporting. The Kushner family dynamics should have been front and center. Instead, the author appears to have patchworked earlier reporting and avoided further, forensic work.

Gosh, 2 despicable families...the Kushners and the Trumps. Difficult to listen to but I guess we need to fully grasp where we are and who is making decisions in this administration. Frighteningly greedy, self-serving people who are completely cut off from ordinary Americans. God help us.
Thank you Vicky for writing this book.

very interesting book. this is a new author for me. I will read more of her books. these people are not what they seem from what she says

Perfect Timing. Can We Survive This?

I purchased this book as an Audible book and what I took from this well investigated piece of journalism is that Ms. Ward really was able to get into the psyche of this couple pretending to be something they're not.
Kushner Inc. The couple known as Javanka.
As Ivanka's father does things more out in the open, the Javanka duo flies under the radar wreaking havoc with our systems of checks and balances that have been in place for more than two centuries. The damages, the secret dealings, etc... Javanka may have been able to unsettle the "norms" that we have built with blood sweat and tears all in the name of the selfish almighty dollar. If you thought Kushner Inc.'s 666 Park Avenue was a boondoggle, we may all hopefully (thank you Robert Mueller et alia.) find out that we have all just been flimflammed like nothing before.

Although I have read and heard a lot of what the book tells us about Javanka, I couldn't stop listening since Ward presents it all pretty breath-taking in the bigger context of both their father's dubious histories.

Fiona Hardingham is excellent in presenting the story.

Javanka's ignorance and superficiality, combined with stunning ignorance, arrogance and insatiable greediness is quite horrendous when considering what could happen out of that combination not only to the USA, but also to the rest of the world. The example of Quatar tells it all.

After finishing the book I very much hope for retributive justice, albeit knowing that people of that calibre almost always get away with violating the law as well as moral and ethical rules.