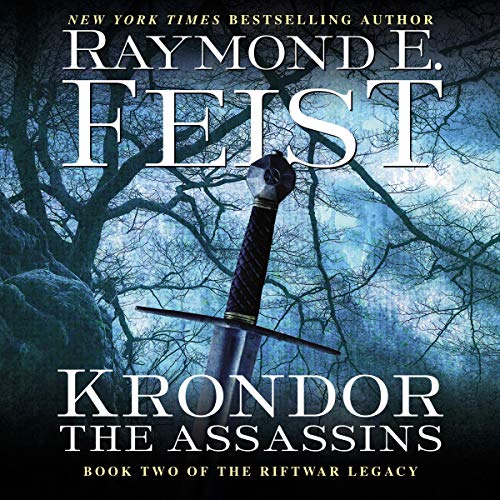 A plague of murder has overrun Krondor, the glorious center of the kingdom of Midkemia. Prince Arutha - newly returned from battle with the Morehdel chieftain Delekhan and the renegade magician Makala - is concerned about the rash of unexplained assassinations in his capital city. And so he dispatches his most trusted agent, Squire James - formerly the thief known as Jimmy the Hand - to discover the source of the deadly epidemic.

James' hunt will lead him to the dank depths of Krondor, through subterranean tunnel and sewer system to a terrible war that is raging in secret far beneath the streets. For here rival criminal gangs are locked in a death struggle for control of a city's vice - dangerous gangsters who go by the name "Mockers"...and others in the thrall of a mysterious being known as "The Crawler". But the deeper he delves, the closer Squire James gets to the true nature of the horror that has already left untold dead in its wake, a nightmare of corruption and deceit that threatens to destroy his liege and reduce Krondor to ruins.

Ensnared by dark, intricate plots and dastardly magics, James must now race to prevent one last murder, the one craven, unthinkable slaying that will plunge Krondor into the all-consuming flames of war without quarter.

once again Feist is a matter of characterization. with great pacing and an exciting adventure. however once again the narrator cannot pronounce names, has odd pauses and insists on calling it the temple of the black pear instead of pearl. makes the enjoyment very hard to get too sometimes.

loved it. wish they would make an online game from this. good reading except for mispronounced Arutha

I enjoy all of Feist's work. Of all of them, this saga is my least favorite but I enjoy the details of Arutha, Williams, and James. Still a good series, but it competes with much better ones.
I did enjoy the reader's voices, inflections. great storytelling.

An okay story, but not the level of follow-up from Betrayal I was expecting. More backstory to William and James is good.

Raymond E. Feist is so visual and compelling in his storytelling. He creates substantial people and plots, weaving a world of wonder.

Not Raymond's best but not his worst...

I am a pretty big fan of Raymond E. Feist. I've read several if his books several times over. All his books are good however this one is just not the same style. It just doesn't have the same substance as his other books.
The narrator doesn't fit the characters. I much prefer the narrator used in his other audio books such as a Kings Buccaneer or Shadow of a Dark Queen. I really did not like the "Sherlock styled narrative".