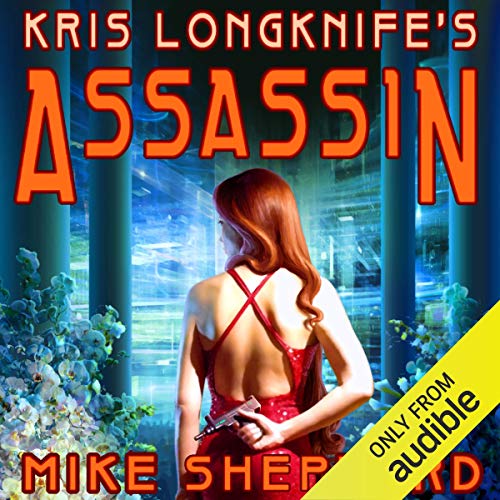 Raised in the shadow of her brother Hank, Vicky now finds herself heir to the Peterwald Empire and hell bent on killing Kris Longknife. When that doesn't work out, she finds herself shipped off to the Greenfeld Navy as a boot ensign. There she learns she can solve problems without taking her clothes off, and really feel good about it! When Kris Longknife crosses Vicky's path again, Vicky is ready to help her save Vicky's dad's life.

Kris Longknife's Assassin is a long novella. It tells the story from Vicky's perspective of her first run ins with Kris Longknife as well as Vicky's apprenticeship under Admiral Kratz. It will give the listener a good run up to Vicky Peterwald: Target.
©2014 Mike Moscoe (P)2014 Audible Inc.

This is a novella that looks at the attempted assassination of Kris Longknife on New Eden by Vicky Peterwald. But this short story provides us with the viewpoint of Vicky. In prior books in the Longknife series we had the same information from Kris’s viewpoint. This story includes the death of Hank Peterwald by Kris. The story also tells a background story about Vicky and how she ends up as an Ensign in the Peterwald navy under Captain Kratz. Vicky’s brief time in boot camp is also covered.

From what I gather this is an introduction to a new spin off series about Vicky Peterwald. Hopefully Shepherd will create some interesting characters around Vicky as he has around Kris. I shall watch and see what develops with the new series; but Shepherd will need to get rid of or tone down the sex to keep me as a reader of this new series. Dina Pearlman narrated the book.

This should be book 1 of the Vicky Peterwald series.

It is chronologically before "Target", and should be listen first.

loved to hate her

good charachter building,plot and subplots. started here now will go back to beginning of series. More of a story for Vicky not Longknife.but wasn't disappointed. glad they ended it positively.

Fills in a nice piece of the background

This story sets up the background to the Vicky Peterwald third book "Rebel" and goes a long way to explain how Vicky grew up and then really grew up in the Navy. It's not long but an interesting story.

I love this author but too much sex.

I really enjoy the Kris Longknife books, and I'm not s prude, and I get she is sexy and all that, but I don't need Penthouse Letters.

What was most disappointing about Mike Shepherd’s story?

Good story and I liked seeing the character develop and I get that he is doing it on purpose to show the characters development, but it's just too much.

I would still recommend the book if you like the series and hopefull book 2 will not be as erotically descriptive. I want to see what Vicky Peterwald gets up to.