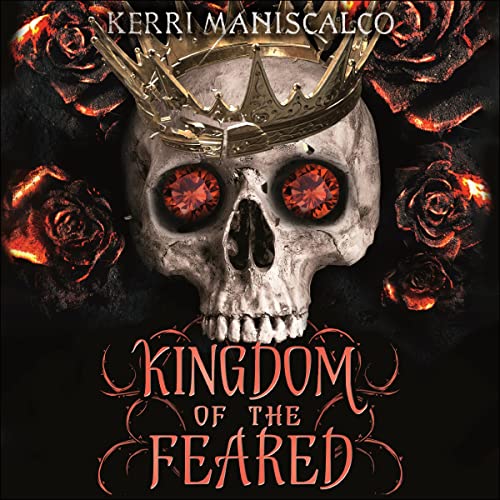 Kingdom of the Feared

All hail the king and queen of Hell.

Two curses. One prophecy. A reckoning all have feared. And a love more powerful than fate....

From the number one New York Times best-selling author of the Stalking Jack the Ripper series comes the dazzling conclusion to the Kingdom of the Wicked trilogy.

Emilia is reeling from the shocking discovery that her twin sister, Vittoria, is alive. But before she faces the demons of her past, Emilia yearns to claim her king, the seductive Prince of Wrath, in the flesh. Emilia doesn't simply desire his body, she wants his heart and soul—but that's something the enigmatic demon can't promise her.

When a high-ranking member of House Greed is assassinated, Emilia and Wrath are drawn to the rival demon court. Damning evidence points to Vittoria as the murderer, and she's quickly declared an enemy of the Seven Circles. Despite her betrayal, Emilia will do anything to solve this new mystery and find out who her sister really is.

Together Emilia and Wrath play a sin-fuelled game of deception as they work to stop the unrest that's brewing between witches, demons, shape-shifters and the most treacherous foes of all: the Feared.

Emilia was warned that when it came to the Wicked, nothing was as it seemed. But, have the true villains been much closer all along? When the truth is finally revealed, it just might end up costing Emilia her heart.

“Be present. And that’s the secret to changing your future.”
~ Kingdom of the Feared (Kingdom of the Wicked, #3), by Kerri Maniscalco

Packed with all my beloved characters, with phenomenal descriptions of the Houses of Hell once again, and a plot that escalated quickly, the last book of the series wrapped up everything beautifully, without leaving questions or holes.

I loved the fact that there were no villains, simply… anti-heroes. I loved how everyone, from Emilia, to Vittoria, to the Princes of Hell, all of them had an agenda of their own and goals they wanted to achieve.

I didn’t mind guessing all the revelations, even from the first book in the series. I was so fully invested in the world that all I wanted was… MORE! 🔥

If you haven’t read the Kingdom of the Wicked series yet, then I suggest you do so quickly! This trilogy is a sin you’ll be glad to follow!

Five glorious stars for this beauty, that made the trilogy an all-time-favorite for me; a series that was there for me from the beginning of 2021, to the end of 2022. ✨

The stars will always incline us–they’ll never bind us!
To the many more rereads that will come!

I really wanted to like this book, but I just couldn’t get into it. The storyline seemed overly complicated and the gaping plot holes left the book feeling incomplete. Super disappointed.


Actually, I thought we were in the youth book section here, but I'm not sure if volume 3 is really aimed at teenagers. I am honestly surprised by the author, what happened?
Emilia and her Prince of Hell can hardly exchange a word without getting straight to the point. And the f...-word really doesn't have to be there so often, or am I too oldschooled?
Some of the story is completely illogical.
For example, the thing with the curse. How much more love is her king supposed to show her? Well, then she sacrifices everything to find out that the curse could also be broken by killing the first witch. Wouldn't there really have been enough time for that? But she's still in seventh heaven, of course. Finally no one is afraid of her anymore, she can go cooking in peace and her prince carries her on his hands for all eternity. Ah ne......