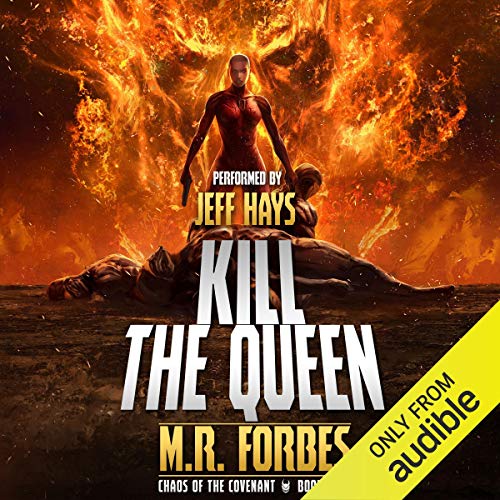 It's not easy being Queen.

While Olus works to prevent the Nephilim from engulfing the entire galaxy in war and the Rejects plot to escape from General Kett, Abbey finds herself trapped in an ancient Seraphim stronghold and surrounded by more enemies than she even knew she had.

Some of them want her head.

Some of them want her blood.

Some of them want revenge.

Some of them want to eat.

And all of them want to kill the Queen.

Enemies become allies, allies become enemies, the stakes keep rising, and the intensity is dialed to 11 as the Demon Queen and her Rejects continue the fight to save the galaxy from the ultimate evil.

this series just keeps getting better

this is a wicked series and just keeps building in excitement and suspense. also the narration is probably the best I've heard and incredibly captivating. I don't like rating things to high do too the water down effect but this book gets a 5 out of 5 with out question.

Cannot say enough about this series.

The story keeps me hungry for more and on the edge of my seat.

the characters have become old friends (I feel like I'm a Reject myself!

Well this was a suspense filled book, I have definitely noticed that every time Queenie gets something good to happen it is just a matter of how quickly she will get attacked. it is a good series and I will move onto the next one.

another one for the collection! and yet another one to listen to. it was a great listen and I can't wait to hear the next chapter!

I wonder how long it will take Hollywood to buy the rights?

I took a chance as I've been able to as an Audible member trying the first in this series. I'm pleased to say each successive book has continued to get better and more in depth with the original as well as bringing in new characters.

By no means is this a complaint, just and observation...How many comic book, TV show, and other well known Sci-Fi series or movie from Trek to Wars to Farscape to Babylon 5 to Ghost in the Shell is this author going to make? If he is doing these things for those who might get the references, fine. I'm certainly getting all of them. However, as a fan of all listed...I wished he make these references in better ways to seem done on purpose instead of just not having a better expression or fresh idea how to say or so something. My biggest issue is with the over use of the word 'Fraggin'. The alternate use of formerly not allowed use of profanity was first circumvented by B5, then by Farscape, and most likely best known by BSG series by Ron Moore & David Eick. C'mon M.R. ---- couldn't you have thought up your own word, or just use some real world profanity? I'm pretty sure the profane word 'shit' has become such a regular everyday conversational word...known one would even notice if any of your characters said it. Some of the situations in your saga certainly could use the words 'OH SHIT?!' Exclaimed by the characters in appropriate circumstances instead just one swear word overused.

Whatever the case... I will continue to look forward to the next installment when it comes out! Keep up the good work, but PLEASE don't fall into the trap of predictability.

I loved this story

I am itching for the next book. I'm really curious to find out if Thraven can feel Abby as an opposite. Really fast pace roller coaster.

There was a lot of adventure and surprises in this episode. one of my favorites in this series.

Gift that keeps on giving!

Great continuation to the story. As soon as a finished this book I went straight into downloading the next. I cannot wait!

The best of the series so far

A lot of the story and character development now coming to fruition. Really faced paced action.

Not much more I can add to what I've already spoken of in the past 3 reviews so I'll just say that both M. R. Forbes an Jeff Hays combine to create another sleep-bane.