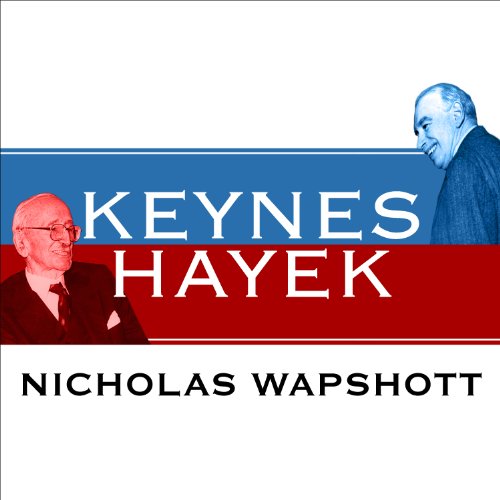 As the stock market crash of 1929 plunged the world into turmoil, two men emerged with competing claims on how to restore the balance to economies gone awry. John Maynard Keynes, the mercurial Cambridge economist, believed that government had a duty to spend when others would not. He met his opposite in a little-known Austrian economics professor, Friedrich Hayek, who considered attempts to intervene both pointless and potentially dangerous. The battle lines thus drawn, Keynesian economics would dominate for decades and coincide with an era of unprecedented prosperity, but conservative economists and political leaders would eventually embrace and execute Hayek's contrary vision.

From their first face-to-face encounter to the heated arguments between their ardent disciples, Nicholas Wapshott here unearths the contemporary relevance of Keynes and Hayek, as present-day arguments over the virtues of the free market and government intervention rage with the same ferocity as they did in the 1930s.

What made the experience of listening to Keynes Hayek the most enjoyable?

I was primarily interested in a discussion of the economic issues, where the economists agreed, where they disagreed, and how Hayek and Keynes changed their opinions over time.The book assumed more knowledge of the issues than I have, and while, making the positions of the economists clear, it did not help me understand the reasoning behind their conclusions. Nor did I get a clear understanding of how - and why- their positions changed over time.On the other hand, the biographies of not only Hayek and Keynes, but of their contemporaries - and the setting of their lives in the events of their times - were fascinating. I was especially impressed with the portrayal of Herbert Spencer, the Webbs, and Alfred Lord Marshall. The portrayal of the Austrian school was weaker but still made profitable listening.This work was both enjoyable and profitable. I expect to listen to it again.

An unbiased evaluation of both the major economist

** Disclaimer - Am a classical economist and prefer Austrian economics to Keynes remedies. ***

Unlike many economist authors, this author is unbiased and lays it out factually.
His ability to separate opinion from facts makes the book easy to digest. Hats off to the author.
His first brilliant assessment that Keynes talks about Macro while Hayek talks about Micro economics sets the stage and expectations that the two shall never compete on an equal platform.
Next, he walks us through each personal life, although i feel he explored and criticized Hayek's personal life more than Keynes.
The success of Keynes and how governments devoured his advice of intervention is elucidated clearly. I can now see how the world fell into his enthrall (and his ability of public speak).
Hayek's greatest weakness and the classical school's weakness was its extreme insistence on laissez faire to the point of being cruel.
Add to that, Hayek's inability as a public speaker. If probably Hayek were like President Reagan, we would have seen a Hayekian world now. Sadly Keynes was a better preacher.
The first Great conflict between Hayek and Keynes as criticism of Keynes's first book makes for interesting reading, anecdotally.
Keynesian economics assumes that the economy is a fragile thing, one that involves constant tweaking by the State. This automatically assumes that entrepreneurship is guided by the hand of the State. Keynes does not explain business cycles and why they happen. Instead he talks about how to spend yourself out of recession. However, the Great Depression was becoming a past thing by 1936 as the author noted, before keynes remedies were fully applied.
Hayek assumes that the economy is a living, breathing sentient being which can find its own path through the judgements and decisions of millions of entrepreneurs who make them. Much like the millions of cells in a human body.
Hayek proves that State intervention skews up the investment judgements made by individual investors and thus forces them to make bad judgements.
That may be true, but when an economy is in a slump, Hayek prescribes doom and despair to Keynes's optimistic approach.
In short, a book worth reading.

This book does a good job of covering the battle between the theories of Keynes and Hayek, and reveals some insights into our 20th century presidents' economic ideas, successes and failures.

Would you listen to Keynes Hayek again? Why?

This is an excellent book describing the lives of the two most important economists of the XXth Century, Their debate on ideas forged the future events to this day.

The chronological story helps the reader to understand the impact of specific conferences, papers or books in the ongoing debate

What does Gildart Jackson bring to the story that you wouldn’t experience if you just read the book?

Magnificent English for a non-English speaker

Yes, although I did not have the time to do it

An interesting read, but perhaps CLASH was the wrong word.

The story of two giants of their time, but the book is far more a history then a compelling story. Not high marks, yet if this subject matter is in your realm of interests I would recommend it, if you are new to economics then wishlist for later.

Biography, History and Economic Scholarship in One

This book is a masterful combination of world events, the personal experiences of Keynes and Hayek, their interactions during their lifetimes, and their continuing influences up to the present day. Listeners with some background in economics will find this book more enjoyable than those that don't.

This is a promising book about a pivotal ideological difference on economics, the role of the state and individual freedom. Unfortunately the promise is hollowed by an author unable to hide his own ideology and preference.

Objectivity by the author would have made for a far better book.

Excellent breakdown of 20th century Western economics. Helps you understand who Keynes and Hayek we're as well as who they studied and influenced. Truly remarkable.

The details of the debate and non-debate between Keynes and Hayek is not always enjoyable or informative. The final few chapters are, on the other hand, enjoyable and informative.

Easy t'o read account of the lives and theories of two economic protagonists.

A lively account of the lives and economic thoughts of two contemporary, which portrays ,Keynes and ,Hayek as contrasts in personalities and in ideology4. There is good historical context which demonstrates how ,Keynes, and then ,Hayek seemed to have supremacy with respect to economic orthodoxy. ,I feel however that more nation case studies could haveeen included, showing how at different times, Keyes and Hayek controlled the debate. For example: I live in New Zealand, and during the 1980s, the ideas of Hayek dominated our political and economic discourse to an extreme n really seen in the United States or the United Kingdom. For us - the freeing up of our economy as promoted by Hayek and his contemporaries has had lasting consequences which include challenges to our notion of egalitarianism. In general - this provides a good summary of competing economic ideologies and is an introduction to modern thought which should not intimidate beginning students or the interested lay person.